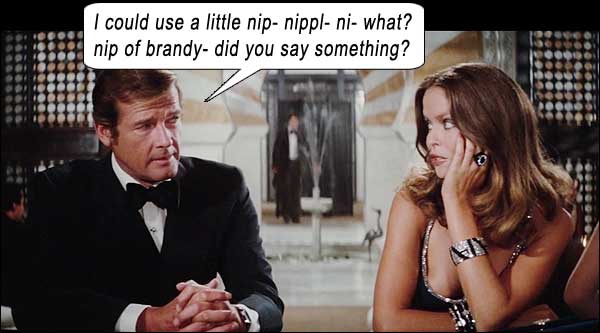 THE SPY WHO LOVED ME is Roger Moore’s 3rd Bond movie (from Ian Fleming’s 10th Bond novel, publ. 1962), and we can see how Moore’s fans might have come to regard him as “better than Connery” with this third solid actioner (despite the odd hiccup of the “Talking Not Shooting” trope in all three adventures).

The cold open is breathtaking (except for the rear projections) as henchmen ski-chase Bond down a mountain. There are so many good practical skiing shots, you’d think the closeup shots of Bond with absurd rear projection backgrounds tilting at comical angles would reduce the excitement of the chase, but I guess audiences of the day were inured to these necessary evils. The efx are a scant improvement on the ski effects in HER MAJESTY’S SECRET SERVICE (from eight years ago – illustrating how slowly early efx were improving), but suddenly none of it matters – as Bond skis directly off a cliff! Stuntman Rick Sylvester in an unbroken take, in imperceptible slomo, glides off the lip of the mountain, detaching his skis and then freefalling for an eternity before deploying a parachute emblazoned with the Union Jack!

Connery never opened with anything this exhilarating!

Sylvester was paid a record $30,000 for the stunt, off the El Capitan in Yosemite, California, and was credited as the first ever ski BASE jump (Building Antenna Span or Earth).

Add to this stomach-turning fall into space, one of the best, most poignant songs of the series, Carly Simon crooning sensually, Nobody Does It Better (the first Bond theme song titled differently from its film).

(Side note: Walter Gotell, who played KGB General Anatol Gogol appeared in FROM RUSSIA WITH LOVE as a henchman. This is his first of 6 appearances as General Gogol; his last would be THE LIVING DAYLIGHTS. Seven Bond films total – that’s as much as Connery and Moore!) 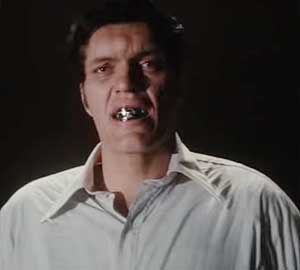 Somewhere under the ocean, we meet Stromberg (Curt Jurgens, THE LONGEST DAY) in his lair called Atlantis, that looks like a WAR OF THE WORLDS Fighting Machine when it rises above the waves. He commissions his giant henchman named Jaws (Richard Kiel) to recover micro-film of a submarine tracking device. We have achieved McGuffin, ladies and gentlemen! (The unkillable Jaws would become a beloved villain of the Bond franchise, also appearing in the next entry, MOONRAKER, and being redeemed there. I think it’s because we all recognized that – apart from his 7’2” killer – the real life Kiel looked like he found it hard to walk or run comfortably; maybe he was at peace with himself, but his gigantism seemed more of a hindrance than a boon. We empathized with the guy as a fellow human, not as a Bond villain, and I’m sure no fans had any qualms about him finding true love onboard the Moonraker.)

To Egypt, chasing down info on missing submarines, with Polaris missiles onboard. (Developed by the U.S. specifically to be launched from submarines, the Polaris missile was THE British nuclear deterrent by the mid ‘70s; a creamy cultural tie-in.) And we marvel at the location shooting – besides the exotic locations in Italy, Canada and Scotland, the most exotic location of all – Egypt. There’s nothing like being there – on the enigmatic Giza Plateau, with those Ancient Alien super-generators in the background ([whisper] the pyramids). 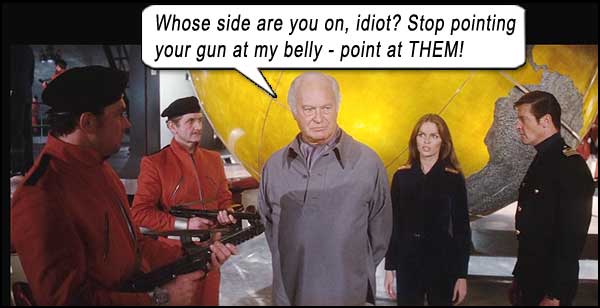 They both want the McGuffin. But Jaws gets it first. Biting his victims like some steel-jawed vampire.

Pursued to the great Great Hypostyle Hall in Karnak, Jaws loses Bond and Anya amongst those monolith columns. Again, just being in the real places stirs the blood in our temples (didja see what I did there – ha!). This Bond adventure, like the temples it visits, is feeling as solid as stone. Then – Abu Simbel Temple, the four statues of Ramses II guarding the entrance – with MI6 headquarters underneath! Moneypenny (Lois Maxwell) onscreen for less than a minute.

The LAWRENCE OF ARABIA theme as Bond and Anya trudge across desert sands. (How are they allowed to use this music? And why do they use it? Wouldn’t it behoove you as a brand to stick to your own themes?)

This is the first time Bond has been paired with another equally proficient agent. Yes, there was Agent Goodnight (Britt Ekland) in MAN WITH THE GOLDEN GUN, but she was eye candy. Anya is Bond’s equal at tactics, research and self-defense. They even bond as two professionals drawn to each other’s expertise. So we feel their urgency when they’re on a train, on either side of the door separating their cabins, wondering like teenagers when the other will give in to their urges and barge in. 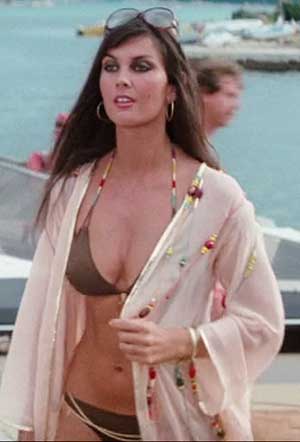 Carolyn Munro: As the Millennials say, I just can’t—

Funny old Q (Desmond Llewelyn) is a big part of the story, appearing at many points with gadgets and information. He’s the Bond series Plot Convenience pudding bear. He brings Bond the Lotus Esprit car, loaded with the usual Bond accoutrement. Anya greets Q with his rarely-mentioned name, “Good morning, Major Boothroyd.” Because she’s a spy. She knows his name (as Chris Cornell would sing three decades hence).

Posing as husband and wife, Bond and Anya visit Stromberg in Atlantis, whom they deduce is responsible for the sub disappearances. Stromberg’s assistant meets them. And we are floored by an even sexier version of Barbara Bach – Carolyn Munro (AT THE EARTH’S CORE)!!! Such fecund lubricity, such salivating eroticism! Almost canceling out Jane Seymour as the hottest Bond babe! However there’s one thing that Jane has that Carolyn lacks – innocence! Jane is the precious virgin love-bucket, while Carolyn’s bikini body simply screams out in urgency for my naked flesh! I can’t even concentrate anymore. What was I talking about?

Some of the action music (by composer Marvin Hamlisch) sounds like LIVE AND LET DIE; he uses that same technique of xylophone on top of accent notes.

The Lotus dives off a pier into the ocean – and transforms into a slick little submarine. In keeping with the theme of the nuclear subs, from below the surface, it launches a tiny Polaris missile at Caroline’s helicopter – and that’s just wrong.

Just when we think her role has been relegated to saying, “James!” every two minutes to warn Bond of danger, Anya presses buttons on the Lotus, launching missiles at pursuers. He asks, “How did you know about that?” “I stole the blueprints of this car 2 years ago!”

As we’re considering the bronzed smooth Anya the perfect spy soulmate for the flighty Bond, she discovers it was Bond who killed her husband recently (on that ski slope). All their bonding seems wasted as she vows vengeance. Bond mitigates angrily, “In this job we all know that any of us can get killed! He knew that too! Yes, I killed him!” She replies coldly, “When the mission is over, I am going to kill you.” I kinda wished the filmmakers followed through with this gritty, tragic plotline, making them mortal enemies after bosom buddies, with Bond having another great love that he himself would have to kill. What a great Greek-Shakespearean tragedy! Instead, we all know Bond’s musk cannot be resisted and the inherent sexism will flop Anya back into his arms.

The finale onboard Stromberg’s giant ship, where Bondanya discovers Strom is a different kind of megalomaniac – he doesn’t want to blackmail New York and Moscow with missiles – he wants to annihilate them and create his own undersea kingdom. 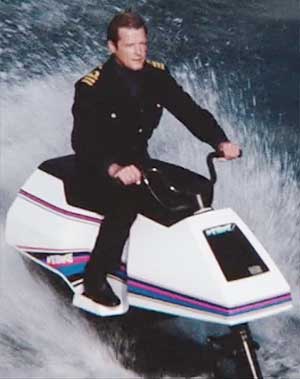 James Bond on a future-boat.

Bond really slides into his role of Commander Bond here, leading the charge of the British and Russian captives, within the massive indoor sets of Stromberg’s ship, with shooting, screaming and Pretty Orange Explosions aplenty. After they escape Stromberg’s ship in their sub, they blow it up for screenplay closure.

Bond uses a jet-ski to speed to Atlantis to rescue Ringo’s wife. (The Jet Ski was domesticated in the early ‘70s, so I’m presuming the filmmakers throw it into the plot because it’s a relatively new gadget – but the waterscooter design was around since the ‘50s, so is Bond behind the curve here?)

In the last battle – Jaws again! Bond uses a giant magnet (the type used to pick up cars in the junkyard, that happens to be in Stromberg’s shark pool room) to pick up Jaws by the jaws and throw him to the sharks – Jaws against Jaws!

As with many Bond writers, Christopher Wood (novelist turned screenwriter, in his first Bond film) and Richard Maibaum adapt an Ian Fleming title to the screen, not using any plot elements from Fleming’s novel. Lewis Gilbert‘s direction seems classier than his last Bond (Connery in YOU ONLY LIVE TWICE).

SPY WHO LOVED ME is one of the better Bond entries and I’m wondering whether that’s because of the potent mix of writer and director. Throughout the Bond series, I’ve tried to make sense of the inconsistent quality of the various films by examining the teaming of directors and writers. I thought I pinpointed Richard Maibaum as a writer who brought The Stupid consistently – and then he co-wrote (with Kevin McClory) the lean THUNDERBALL with director Terence Young. Meaning Young might have reined in Maibaum’s Stupid – and then we see they were both onboard the idiotic FROM RUSSIA WITH LOVE (so – maybe it was McClory who did the reining?). In SPY WHO LOVED ME we see the primary writer Wood might be reigning in Maibaum’s Stupid – and then Wood’s next screenplay, MOONRAKER, outdoes all of Maibaum’s Stupid in one fell swoop – with this director Lewis Gilbert! Meaning the same team that brought us this good film also brought us the next dumb film!

It doesn’t make sense – UNLESS – we surmise that the Bond series producer Cubby Broccoli was simply churning out this cash-cow product and any “good” entries were simply flukes? Sorry, Bond fans, you don’t want to imagine the godfather of a series you hold dear was a mercenary who never cared for his own product’s quality, or your intelligence, taste or enjoyment, but if you do an objective examination, with pie charts, Venn diagrams and those wall displays with the pins and photos and connecting lines, you’ll see the horrible truth. These men were a meat factory. And you were the cows…

No spy ever loved you.

And the heartfelt lyrics? A sad reminiscence for most of us. For those young studs that are now at that stage in their lives – “Baby, you’re the best!” – revel in this era, boys. It doesn’t come back. And I’m not just talking about sex. I’m talking about your whole mind-set, your lifestyle, your persona. Just as we all know certain sports are a young man’s game, so too is being “the best” in relation to another person. As the days tick down to the inevitable, your cynicism, paranoia, sociopathy grows exponentially, until you become probably the “worst” for other people as you age into irrelevance.

Even the mighty James Bond would experience this – as we see Roger Moore in A VIEW TO A KILL most definitely looking too old for this shit at 57 years of age, sliding into irrelevance as a leading man, a love interest, and a beloved character. Nobody does it better – than a young man. That’s why this song is so sad to me (and all those past a certain age) – it’s a testament to days gone by, to better times, to living at your peak.