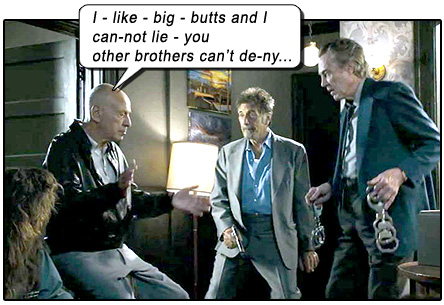 Say goodnight to the bad guys…

The KING OF NEW YORK takes SCARFACE for one last night on the town. Before he has to kill him.

A comedy with heart – and imminent heart attack – as three aged wiseguys in their septs and octs wheeze about town on one last bender, partly in celebration of one of them being released from jail after 28 years, partly because they know all too well they are one heartbeat away from God’s Celestial Whacking.

Movie opens with Doc (Christopher Walken) picking up Val (Al Pacino) exiting prison. Val’s ready to party, and Doc begrudgingly complies. Night on the town ensues, poignant dramedy unfolds: visiting hookers, abusing Viagra, snorting prescription drugs, whoremongering at a night club that turns into a touching need for human contact, casually knocking off a pharmacy while complaining about the insane co-pays, stealing a sports car, helping a rape victim exact ball-breaking revenge upon her rapists… It’s a stroll through an autumn sunset; the twilight of the godfathers. With a Damoclean twist.

Their crime boss (Mark Margolis) has ordered Doc to kill Val (he believes Val killed his son). Val deduces this move was coming, but doesn’t resent Doc, “I’d do the same. It’s a job.” Val, a stand-up guy, relates how the boss’s son was killed in crossfire, yet realizes that if there is to be honor among thieves, even though he kept his mouth shut in jail, the hit must happen even though it is incorrectly motivated. Doc keeps putting off the hit – his fondness for Val reaches across the decades, reflected in their casual sardonic jabs at each other and their recollection of glory days – until they both agree on an elegant final solution.

Doc and Val “rescue” their driver Hirsch (Alan Arkin, as scratchily acerbic as ever) from a retirement home, tied to an oxygen tank; on his last legs, Hirsch proves he can still outrun a police pursuit in their stolen sports car. There is an easy chemistry between the three, a vibrant history of carefree crime (“It’s like the old days!” “No, it’s better, because this time we can appreciate it…”); the disappointment is not in seeing these three icons interacting, but on how short that interaction is. Movie is mainly a showcase for Pacino and Walken to play off each other, with no unnecessary flamboyant explosive passages.

This is a movie where the small things count, not some shoot-em-up, gang warfare, drug-running, car-chasing bulletfest. Pacino and Walken slide into these roles insouciantly,  their careers having foreshadowed this movie for decades. Pacino, doddering like he’s about to keel over, Walken exhausted keeping up that Walken impression for so long. Much like UNFORGIVEN, we are seeing what happens to bad guys after they’ve retired as bad guys.

Luscious Lucy Punch in a sweet role as the madam at their regular brothel; Julianna Margulies as Hirsch’s doctor daughter; Vanessa Ferlito as the rape victim (with that startling Hilary Swank-ish ugly beauty), and Addison Timlin as Alex, a welcoming waitress at Doc’s regular diner with a link to Doc that is one of the story’s many poignancies that might wring a tear in its revelation. The cool soundtrack features Bon Jovi, Sam and Dave, Muddy Waters and Elvin Bishop. The last time Mark Margolis shared the screen with Pacino was as Alberto in SCARFACE. Pacino shot the hell out of him there as well…

The many heartfelt moments are so unexpected they shine brighter than any unnecessary explosion. Val gives Hirsch’s eulogy, a profound treatise on our ephemeral legacies: “… he’ll be missed by so many of us that got left behind. He was a witness to our lives. Not many of those left. So there’s one less person on this Earth who knows our name, who remembers our childhood; who shared in each moment as it passed. Y’know, they say we die twice, once when the breath leaves our body, and once when the last person we know says our name. And then, Hirsch’s life will be forgotten, like all the other poor fucks who ever had the glory o’ livin’. Amen.”

[Tony Montana accent]: So say goodnight to the bad guy…

…in a blaze of BUTCH AND SUNDANCE. Movie opens with Doc’s painting of a sunrise; sunrise associated with his lost granddaughter; closes with a pan up to sunrise, cross-fading into his painting. Elegant elegy.