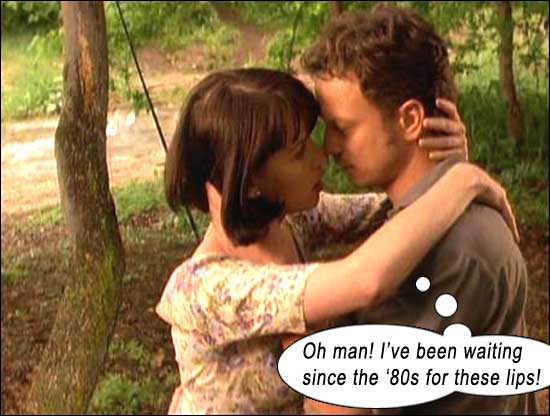 My Favorite Martian versus Garth Brooks.

This story should have stayed in our heads. Reading Stephen King‘s daunting 1000+ page The Stand (restored version, of course), nothing “visual” could intercept our imagination driving onto the wastelands of a dead earth, seeing an unseeable being (Flagg) in our mind’s eye, envisioning the disturbing horrors of the Lincoln Tunnel gridlock, the appendix operation, the suicides and rapes and mean killings. 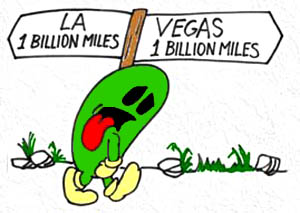 To the chagrin of a billion readers, director Mick Garris and the tome’s author himself, King (as executive producer, screenwriter, and actor), offer us a vapid TV visualization of the book, diminishing all its epic impact.

A super-flu has decimated the bulk of humanity and two camps (one Good, led by Mother Abigail in Colorado, one Eeevil, led by Randall Flagg in – where else? – Vegas) amass devotees to stage a Final Battle.

This six-hour mini-series, a direly obvious television production, gives us an intelligent A-Lister as Stu Redman, the tacit leader of the group (Gary Sinise, working his Mini-Eastwood Method), Ray Walston (who still can’t shake that MY FAVORITE MARTIAN Method), Miguel Ferrer (great in anything, here Flagg’s right-hand man), two Brat Packers right at home in TV Land (Rob Lowe and Molly Ringwald’s Lips), and Stephen King himself (playing against type, as a character with an IQ greater than his shoe size, doing a very passable imitation of an actor). Though Ed Harris and Kathy Bates phone in cameos, the production is hobbled by a clutch of talent-challenged aspirin ad veterans that round out the cast. 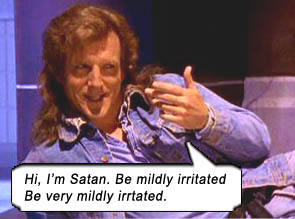 And the bad guy? The incarnation of hell-on-earth whose visage people could not cast their gaze upon? – a country singer with a mullet! Maybe King made a mistake in naming his menace “Randall Flagg.” Who could tremble before a villain who answers to “Randy”? If Jeff Goldblum (as rumored) had accepted the role of Flagg, we might have had a respectable screen-demon on our hands – instead, the movie miscasts Jamey Sheridan as the Dark Man of our nightmares: a toe-tappin’ redneck with a Def-Leppard-roadie hairdo. The only thing more sinful than Sheridan’s Huey Lewis mullet-palooza was his 80s fashion sense.

Leaning heavily on the delusional proselytizing of their matriarch, Mother Abigail (Ruby Dee), no one seemed to notice that the “epic quest” she entreats four characters to undertake “to make a Stand!” against Flagg’s evil achieves nothing that wasn’t going to transpire anyway. Flagg’s downfall was precipitated by inefficient management, insubordination and bad judgment in recruiting a loose cannon like Trashcan Man (a compulsive arsonist, played with lunatic scene-chewing by Matt Frewer), who delivers a nuclear weapon into the heart of Flagg’s congregation, only to have it set off by none other than the Hand Of God (whadaya know – a deus ex machina as a deus ex machina!). All these events had nothing to do with our rose-mouthed do-gooders and their half-assed jibes at Flagg, ultimately getting crucified for their troubles… Well, trusting to the wigged-out soothsaying of a raving old woman hallucinating from her mixture of Demerol, Cyclizine and down-home moonshine and traveling to The Dark Man’s lair with no plan, no resources, nothing but “the shirts on their backs” was bound to lead to the business end of a crucifix.

Even in the book, simply laughing in the face of the Bad Guy in order to cause empire-crumbling dissension was an obtuse disconnect; a tale so wonderfully kinetic and operatic – brick-walled when one realizes that the author himself had no clear notion on how to wrap that beargarden with any serious impact. 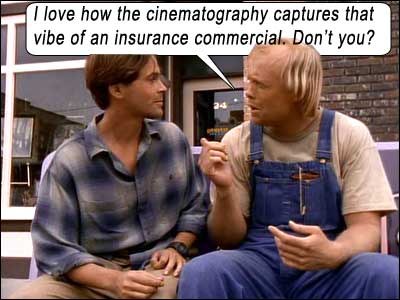 Ultimately, the actual “Stand” spoken of so reverently comprised of interminable walking scenes which amounted to padding, with Stu breaking his leg and sitting out the key plot scenes in a ditch. No one was allowed to drive, with no rational reasons given, other than “Mother Abigail said so.” And after all that meaningless walking – once the Old Testament God of Wrath goes Gomorrah on Vegas with His old-fashioned tabula rasa idealism – Stu boosts a car and drives back to Colorado!

Mother Abigail’s wholly erroneous precognition is surprisingly not even questioned by now and we surmise the townsfolk just want to cut their losses and move on, whilst retiring the old bat to a sanitarium. With her amorphous auguring and everyone else in the cast displaying bursts of psychic linkage whenever required to enhance the plot, the actual “boundaries” of these psychic powers is never delineated.

For example, Stu can “sense” when a character fatally crashes his bike, yet he couldn’t sense that same character building a bomb, premeditating destroying their community. In another case, after two of Flagg’s henchmen kill a Judge whom Flagg wanted alive, Flagg himself suddenly appears and flogs them to death – why didn’t he simply appear two minutes earlier and acquire the Judge himself?

King is justifiably proud of this work; what were once simply motes of his imagination, transferred to typewriter keys, now walking, breathing townsfolk. In a late scene, his joy at seeing “Stu!” and “Tom Cullen!” was heartfelt as their Creator, as well as his character happy for their safe return.

The book is more forgiving in its plot holes and inconsistencies, but that is more telling on the genius of the writer than the content of the tale itself. 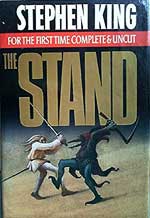