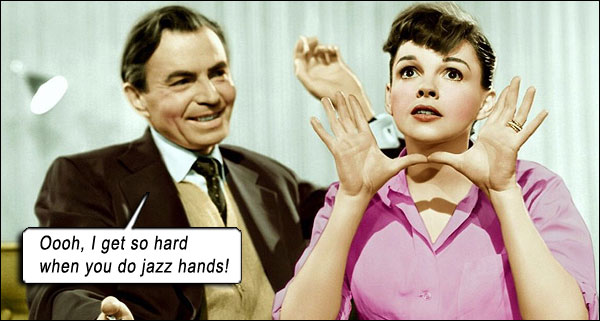 A generation passes.  A STAR IS BORN rises.

18 years after the original 1937 movie (with Janet Gaynor and Fredric March), which followed an ambitious young girl being molded into a movie star, writer Moss Hart and director George Cukor remake A STAR IS BORN as a Musical, where the young girl is now a singer who becomes a movie star.

Judy Garland is Esther Blodgett, singer with an orchestral “big band,” and James Mason is Norman Maine, the alcoholic movie star who “discovers” Esther and puts her on a pathway to movie stardom, even as his own star declines.

The legacy of A STAR IS BORN and its many remakes overshadows the inauthentic aspects of this movie. Firstly – you call that drunk? Norman appears backstage during the opening number and scares the horses and showgirls; he’s meant to be rolling drunk – but he’s wearing a three-piece suit impeccably, with a perfectly unblemished white bowtie, and is speaking like James Mason Acting Drunk. His behavior seems more bipolar than drunk, as he erupts into violence intermittently, displaying the strength of someone who is on more than just alcohol.

Secondly – Esther is a pretty successful singer, and not the naïve, fame-hungry waif her character was in this movie’s predecessor. The opening scene is a gargantuan onstage song-and-dance production featuring Esther on lead vocals fronting her band. The nature of this show (with its massive budget, patronized by big stars) denotes that she is not an “unknown” – she must have been well-known as an entertainer, or had super connections, to get this gig, which must mean her star is rising, or pretty much risen to even be here (with her 20-piece orchestra! To deflect that she might be famous, the orchestra is named after its band leader).

Esther’s Meet Cute with Norman involves him drunkenly stumbling onstage and Esther working him into the act like a pro. Then she has to rush off to another gig – Wait!… Two big gigs in one night? This chick is killing! Does she even need any help to cross over to movies? A couple more years, the movie studios will be knocking on her door. (How can I be sure it’s another BIG gig? Well, Norman tracks her to this next venue, where the maître D’ knows him well, and offers a selection of young girls that Norman turns down, as he is after the singer that just stole his inebriated heart. Meaning, this place is no dive bar; it’s the equivalent of Studio 54 or Spago.)

Norman eventually tells Esther she’s got “it,” and promises her a screen test. On this promise, Esther leaves her band that night, by confiding in her pianist Danny (Tommy Noonan). The character of Danny in the original movie was a Just Friend with no cojones, while here he has graduated to pianist, although any man who lets his Just Friend snuggle against him in bed while both wearing pajamas, and pour out her anguish over going with another man – is a sap! So Danny was a sap then – and he’s a sap now!

Then Norman disappears. And Esther, having quit the band, gets a job with a tray and mini-skirt – but hang on! Why is she waitressing as if she’s on her last pennies? Hasn’t she got enough saved from her successful road gigs to stave off the down time? Is she a) going to keep this job until Norman finds her? b) saving money for a screen test herself now that Norman gave her confidence? c) waiting for someone else to “discover” her, due to a movie star verifying she has “it”? I don’t get what Plan B is. Is there a Plan B?

There is a strange glitch in the movie’s action in the transition between Act I and II. We see a montage of stills with the movie’s audio/dialogue running underneath them – of Norman being drunk and taken onboard a boat for a shoot, thereby leaving Esther in the lurch unintentionally, Norman ordering his staff to search for Esther, and he turning up at her door to resume his cultivation of her career/panty. Was this a feature of the actual movie, or did the studio lose some footage? Copyright/legal issues? Whatever the case, it’s jarring, and doesn’t look intentional.

And it’s a complete waste of time! Because this interlude serves no purpose other than to drop Esther into dire straits for Norman to “rescue” her. Which raises the question: Why didn’t the filmmakers introduce Esther in a smaller way – why not introduce her as this waitress?! – rather than that large-scale production for the sake of flexing their vaudeville muscles? Easy: this movie was a comeback vehicle for Garland, so wanted to display her prowess, character arc be damned.

Judy Garland’s singing is the high point of this movie. Not the songs – the singing. In the first act alone, she squeezes in at least three whole songs, and crushes it with her mighty vocals – but the musical numbers themselves are tiring if you are not into this style of jazz/big band bop. At 2 hours, 34 minutes, the singing is interminable padding many Movie Maniacs could do without. Touted as a comeback for Garland after a four year absence from film (her last movie, SUMMER STOCK in 1950 with Gene Kelly), STAR would simultaneously be the beginnings of her slow fadeout, as she never commanded this kind of salary again (reportedly $100,000 plus 50% profits). Nominated for 6 Oscars, it’s almost sad to see Garland in this film, not because she does badly in the role (her acting borders on melodramatic, but is passable in a musical), but because we know she is only 32 here – but looks over 40 for some reason. Drugs? Physical condition? Hard life? In the grandest irony, having Judy Garland in a movie about the joys of rising to stardom sends the exact opposite message; Garland is actually the Norman Maine character in her real life, sinking under the weight of her demons…

A star is forlorn. 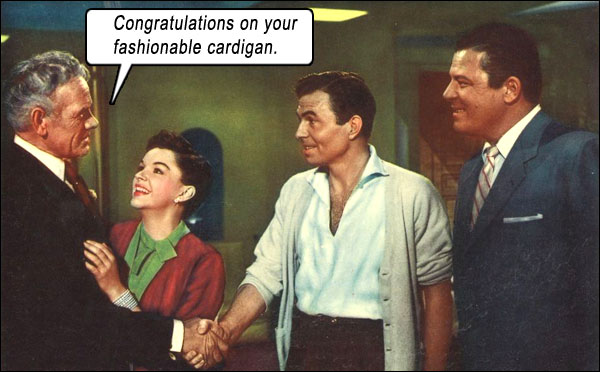 Norman adds some clarity to the title: “Talent isn’t always enough. You need a sense of timing, an eye for seeing the turning point, or recognizing the big chance when it comes along and grabbing it. A career can rest on a trifle…”

We all know talent ain’t enough, but this film once again hammers home that without the endorsement of the Hollywood Studio System, no one would get anywhere. The Studio’s claws are ubiquitous, represented by two That Guys – doughy Jack Carson is publicist Jack Libby and Charles Bickford is studio head Oliver Niles. The movie makes no effort to hide its cynicism, starting with the montage of three white-smocked guys working on Esther’s visage like surgeons. Eventually, they make her look like a plastic-doll version of Marilyn – and Norman laughs at her, forcing her to wipe off all that garish makeup (much like Bradley Cooper in real life would tell Lady Gaga to wipe off her own horrible plastic-doll makeup for the 2018 remake – to spectacular results).

As we see deeper into the System, the cynicism reaches dizzying heights. When Esther picks up her first paycheck, she finds out her name has been changed to Vicki Lester. As she traverses the Oliver Niles Studio, someone remarks, “You’ve just signed with us, haven’t you?” The hive mind of the System! And when Norman announces to Oliver that he and Esther are going to marry, Oliver balks for a moment. Norman remarks unironically to Esther, “He’s trying to decide whether it’s good for the studio.” Libby the publicist chimes in to Oliver: “She’s the hottest piece of property the studio has right now,” meaning: Don’t let her get waylaid by Norman. But Oliver sees it the other way: “She might be a good influence on Norman,” meaning: She’ll bring him round to cooperating with the studio and making us more money again. The cynicism is sky-high by now.

Yet there is no chemistry between the leads – we can’t understand why they’re getting married either. We don’t see indications of them getting closer as a couple; from their first meeting, we see Norman manhandling Esther like property – it’s quite disconcerting in this modern age – until the middle of the film where she is suddenly declaring her love for him, while he is trying to push her away because he knows that everything he touches he destroys. Tales of Norman’s corrosive drunken antics abound – but we never see them, except for that opening scene. So with not much indication of his habit, we also wonder why he would think this about himself. And then they marry.

Esther wins an Oscar, Norman crashes the ceremony drunk (well, drunk like James Mason Acting Drunk in a Suit), and is put in a sanitarium to dry out.

After this dramatic high point, movie makes the mistake of jump-cutting to a musical number with Esther. Backstage, she meets Oliver, and pours her heart out about Norman; it’s that classic clichéd Oscar bait scene, lotsa tears, lotsa overacting: “What is it that makes him want to destroy himself?!” and then… right back into the musical number! Actively ruining any gravitas Garland’s Oscar moment might have held. What is the matter with these filmmakers? (It’s like Jerry Lewis squeezing comedy skits into his movies that have nothing to do with the plot.) Maybe the filmmakers were trying to convey Esther’s professionalism, in having to perform under duress, bracing up under the weight of her problems? No. It’s about the prime directive: Showcase Judy’s singing! 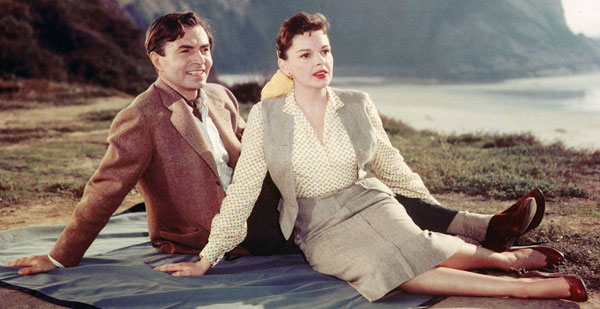 From here, this 1954 version follows every beat of the 1937 film: Norman dries out – meets Libby, who insults him – fight – off the wagon – missing for days – hauled drunk to court for a sentence – judge gives him jail time, whereupon Esther steps in and appeals melodramatically, “Please don’t send him to jail. I’ll take him” – and gets him off! Do any of the filmmakers know how courts work? Has no one heard of res judicata? “A matter that has been adjudicated by a competent court and may not be pursued further by the same parties.” Meaning that after a person is sentenced, nothing can be done to reverse the sentence, even if new evidence is presented.

A star is annoying.

After overhearing Esther talking about putting her career on hold to take care of him, Norman cannot bear the thought of his demons holding her back, and decides to walk into the ocean at sunset and never come back.

Thankfully, they don’t squeeze in another song at his funeral.

The filmmakers who crafted this movie from its original version – writer Hart and director Cukor (also the director of 1932’s WHAT PRICE, HOLLYWOOD?, a film that many believe was the progenitor of the original 1937 movie) – did a great job of keeping the same beats, while adding the Musical element. If it weren’t for Judy’s version, there might never have been a Barbra or a Gaga, both reliant on the titular star being a musician.

Esther’s final words in the film are the same as the original version, but we are a little more in tune with her reasons: her Just Friend pianist tells her that if she quits, it is like throwing away everything Norman created. Thus, at her first public appearance after his death, Esther opens with, “This is Mrs. Norman Maine!”