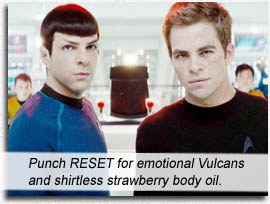 If this don’t keep the fanboys happy, nothin’ will.How do you approach a movie as sodden in mythos as the STAR TREK franchise? The approach must be as trepidatious for film makers as it is for geekboys and weekend viewers alike. Every inch of a production under the STAR TREK aegis would reek of esoterica and legacy. How could anyone possibly circumvent the pitfalls and launch another TREK into warp drive without twisting someone’s seven of nine?

Here’s how: STAR TREK 2009 – a grand homage to a dubious institution. (Some may immediately take issue with “dubious” – but let’s be frank, the original 1966 series was no SPACE: 1999; it was cheap, relatively unsuccessful and aggressively fey. The legend has more cred than the product.)

Funny that director J.J. Abrams and writers Roberto Orci and Alex Kurtzman have recreated Gene Roddenberry’s idea exactly as it has always been – simple story set in space, where English is still the Universal Language, where unknown crew members with different colored tunics always die when they go EVA with the stars, where sparks still fly out of consoles to signify damage being done to a hypersophisticated starship.

The homage and reverence of TREK 2009 comes in two parts: Fully 50% is the efx. They’ve really taken this seriously. The surroundings of the 23rd century are stunning in their detail – Iowa is still a bleak, flat landscape but in the distant haze, hulking cityscrapers loom, rising into the lower stratosphere like ocean liners tipped on their sides; we see the NCC-1701 USS Enterprise in all its maiden glory; jaw-dropping space scenes, which sometimes lapse into total silence during exterior shots, lending the vacuum of space its long-sullied reverential, foreboding air. These latest boastings in special effects technology outdo Lucas – they are the best you will see at this point in history.

The other 50% is the casting. Perfect. Chris Pine is James Tiberius Kirk, looking like Ray Liotta Junior and as fulla beans as we remember the shirtless Shatner; Zachary Quinto is the closest thing to Spock as body oil is to Shatner; Karl Urban channels Bones hilariously, his famous disclaimers scattered passim: “Goddamit, I’m a doctor, not an engineer!”; Anton Yelchin soft-v’s all over the place as Pavel Chekov; Simon Pegg as Scotty steals his scenes (but then Simon Pegg can make even a David Schwimmer film palatable, how could he NOT steal his scenes in a well-made movie?); John Cho (yes, of HAROLD AND KUMAR) is Sulu; and Zoe Saldana as Uhura spreads her pheromones over Spock like chocolate duck butter.

A fitting re-launch of the STAR TREK franchise. And all thanks to Leonard Nimoy! In a wizened cameo as Spock Prime, he is responsible for some kind of time-paradox-anomaly-panty-twist, so these young characters we see are supposedly the same characters we know – but in an alternate time continuum, forging new destinies.

At film opening, we meet the USS Kelvin, populated by Captain Arab Guy and his crew of Teen Models, under attack from Eric Bana as the vengeful Romulan, Nero, directly tied to the time paradox plot. One of the models is Kirk’s father (Chris Hemsworth – THOR was Kirk’s father? No wonder he’s so fulla beans), who makes the ultimate sacrifice for his unborn son’s escape, in the film’s most touching, human scene, as the mother describes via radio her newborn son – James Tiberius – to the father, as his ship impacts. Birthed during a battle, conflict would follow J.T. all his life like green-skinned babes in space bikinis.

While on planet Vulcan, young Spock, conflicted with emotions from his half-human heritage, is invited to attend Vulcan Academy and declines. For emotionless Vulcans, these guys sure display a lot of emotion – when chastised by the elders, Spock gives the “Live Long and Prosper” salutation not in comity, but in sarcasm. Snidely excellent.

The best aspect of TREK 2009 is that it makes the Enterprise crew and the starship Enterprise powerful, not just in reputation – in action. We see Sulu (whose combat experience is in the seemingly innocuous art of “fencing”) do sword battle like Toshiro Mifune, we see the might of the Enterprise’s big guns; we see Spock give the nerve pinch – to Kirk.

Though there is not much space between explosions and stunts for characterization, TREK 2009 explores well, albeit briefly, the conflict between Kirk and Spock over the captain’s post onboard the Enterprise, also playing up an amusing “romance” between Spock and Uhura. The plot involves Spock Prime re-booting history by accident and Nero traveling through time to nerve-pinch him, with the Enterprise crew being caught in the crossfire and having to rescue their captain (Bruce Greenwood) from Nero’s ship.

And the moment we all wait for: Quinto meets Nimoy and engage in some sizzling hot Spock on Spock philosophy. (Poffy Predicts: Other players in this franchise will come and go – Zachary Quinto will be forever Spock.)

Nimoy’s closing voiceover is the immortal intro to this immortal series: “Space: the final frontier. These are the voyages of the Starship Enterprise. Her ongoing mission: to explore strange new worlds, to seek out new life-forms and new civilizations; to boldly go where no one has gone before.”