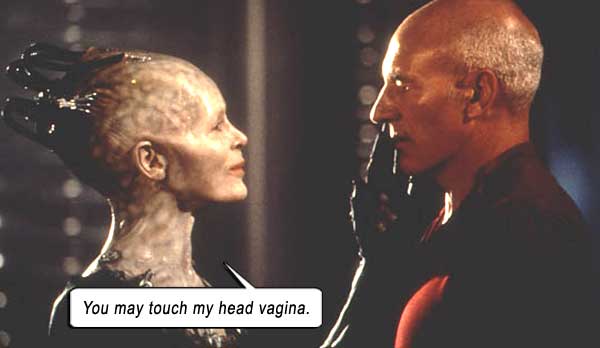 Everyone gives Jonathan Frakes more rope than he deserves as a director. No wonder he hangs himself with STAR TREK: FIRST CONTACT.

With production values just a hair’s breadth above the TV series from whence they sprang, director Frakes (who also co-stars as the Enterprise’s first officer) helms a slow-moving, disjointed adventure that finds Earth of the future overrun by Borg – a race of cyborgs with a hive mind – with the Enterprise crew having to go back in time to the first contact humans had with aliens, to ensure Biff doesn’t get the Almanac.

They follow a probe through a time warp and someone says, “Blah blah blah vortex” and Frakes says, unironically, “That makes sense.” Actually, no, but that doesn’t stop them getting exactly where they want to go, which seems to be some hybrid Old West/FIREFLY-type village where the source music is all Generic Blues Guitar Solos.

James Cromwell is the scientist from this “ancient” Earth, a drunk who won’t be separated from his Generic Blues Guitar Solo tapes, whom the Enterprise crew must coax into following the correct timeline to ensure the Borg don’t win Wimbledon a sixth time. Alfre Woodward is Cromwell’s miscast lady friend, who doesn’t seem to remember how to act; a young Neal McDonough is an expendable crew member.

Brent Spiner is Data, as always, the most empathetic cast member even though he’s the crew’s android; LeVar Burton is Geordi Air Filter, as always, reminding us that ROOTS was a lifetime of shame ago; and Jonathan Frakes is Riker aka Number Two (in rank and smug acting ability). The usual cast of glorified extras round out the cast: Michael Dorn, Gates McFadden, Marina Sirtis.

Written by series regulars Brannon Braga and Ronald Moore, one of the subplots is that Captain Jean-Luc Picard (Patrick Stewart) has been “infected” by the plodding, zombie-like Borg (since his assimilation in the TNG TV episode Best Of Both Worlds, when he woke up as the six-time winner of the French Open) and so is constantly in mental battle with his bad self. As the famous slogan reads, “Resistance is futile.” But the writers cannot convey this inner turmoil compellingly. As an example of lame contradictory writing: at one point, Picard’s whole crew advises him to blow up a Borg ship, “If we blow the ship, we destroy the Borg!” but Picard wants to chase them instead, because… Ahab – white whale – literature! Picard: “They conquer worlds, we fall back; they assimilate races, we fall back. The line must be drawn here!” Yes, that’s why you should BLOW THE SHIP, Captain Confusion!

Two separate storylines bifurcate and help the movie make even less sense that it was already not making. While Picard and expendables try to stop the Borg on the Enterprise, Number Two and Kunta Kinte try to fix the timeline with a skeptical Cromwell. Stunted direction and haphazard editing ensues. There is a stupid 1940’s speakeasy scene where Picard goes Al Capone on some Borg, which completely ruined the movie’s tone as badly as John McEnroe ruined Borg at the 1981 Wimbledon final. Why is this scene even here? You can-NOT be serious! 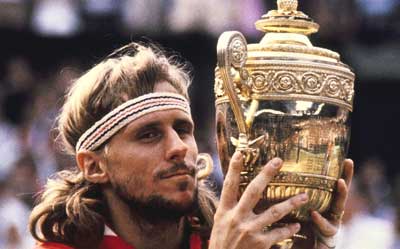 The Borg: triumphant against all humanity.

FIRST CONTACT is supposedly one of the “good” STAR TREKs, but apart from some disturbing elements with the Queen and the hive mind mentality, it’s a pile of trash conceptually, and a B-movie production-wise.

When our heroes see the future Earth populated by Borg, it means the Borg won. Right? “Population: 9 billion. All Borg.” So in this future, the Borg launch a probe at Earth’s past, to guarantee that they stay winners. But what makes them think something in the past can affect their present? My point is: if the Borg had already won, why send a sphere back in the first place? By sending it back, they actually create the opportunity to DEFEAT the sphere and change the present. Which happens. Which means that the Borg LOSE the future. But they’ve already won! Why did the writers create this conceptual time-loop mess?

In the end, aliens land on Earth and Cromwell stares wide-eyed, “My God, they’re really from another world!” Why, because they’re wearing shiny robes? Wait until this Vulcan unleashes his pointy ears and drops a Live Long and Prosper on you!

Borg retired after the 1981 Wimbledon and went into high fashion. As with his tennis career, resistance was futile.