The Death of Kirk! You know these filmmakers are going to hell for this, right? 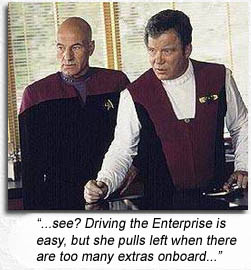 STAR TREK: GENERATIONS was meant to showcase the TREK TV spinoff, THE NEXT GENERATION; instead, the singular event on all our minds is how Kirk is going to eat it. The Original Series fans would dread the moment, yet obsessively study it with rubbernecker fascination, while the NEXT GEN freakazoids were just waiting to flush Kirk’s impulse power out of their wormholes once and for all.

The legacy itself defeats the movie. But if it were not for the legacy, Kirk’s downfall would be even less of an anticlimax than it already is. Captain James T. Kirk is but a minor tangential character in this mix of annoying and innocuous characters. His death is meaningless – it serves no plot point and it is not a sacrifice, although it is written heroically to look that way.

Captain Jean-Luc Picard (Patrick Stewart) of the 24th Century and Admiral James T. Kirk (William Shatner) of the 23rd Century join forces to battle a scientist named Soren (Malcolm McDowell), who is destroying stars and planets in order to catch an energy ribbon called The Nexus, buzzing through the universe and transporting everyone it touches to their personal fantasy realms – you know, like the Christian version of Heaven.

(Christian Heaven: attained through a grisly process we call Death. Like Christian Heaven, the Nexus is something terrible on this side of Death, then Paradise on the other side. Everyone wants to get to Paradise – but they don’t want to get there by actually dying! Isn’t that just like a Christian?)

Movie opens with Chekov (Walter Koenig), Scotty (James Doohan) and Kirk attending the maiden launch of Enterprise-B. Crowded by paparazzi on the bridge, in a strange mix of art-imitating-life, they meet unseasoned Captain Harriman (Alan Ruck – Cameron from FERRIS BUELLER’S DAY OFF; hope he doesn’t do to the Enterprise what he did to his dad’s Ferrari…).

Almost immediately, Enterprise-B must rescue two ships caught in splashy special effects – The Nexus. After beaming refugees aboard, Harriman has no idea how to outrun the Nexus (which is why he left all the planning to Ferris) and abdicates command to Kirk, who plants his ever-widening girth in the Captain’s seat with a shit-eating grin on his face, before he begrudgingly gives it back to Harriman and reverts to his Action Hero idiom to save the day. Exactly like Spock’s death in STAR TREK II, Kirk is killed by a McGuffin: he runs downstairs to Do Something Jargony To Some Jargony Thingy – and is blown into space…

We meet the crew of THE NEXT GENERATION (TNG) in a tiresome sailing ship sequence that only TNG fans’ mothers could love. Then Captain Picard leads Riker (smug Jonathan Frakes), Data (silvery Brent Spiner), Geordi (visored LeVar Burton), Crusher (insipid Gates McFadden) and other passengers, on a rescue mission to a dead space station, where they pick up a scientist named Soren, who immediately causes trouble with his devious Nexus plans and British accent.

Guinan (Whoopi Goldberg) appears with a funny hat any time Picard needs information about the Nexus. She explains that if you fall into it, “you’re not going to care about anything and not going to want to come back.” But it’s the old SUPERMAN II argument: “You’ll lose your powers forever” – until he wants them back, at which point, he goes and gets them. So too, when Picard finds himself in the Nexus as the father of five kids from a Charles Dickens novel, with an attractive (but no doubt, stretchmarked) wife, he retains all his faculties and decides to leave.

Guinan actually appears in the Nexus with Picard – driving the movie further into B-movie dipping sauce with each idiotic line, “I am onboard the Enterprise, but I’m also here… Think of me as an echo of the person you know.” That explains everything! Then she tells Picard he can simply leave… to any point in time he chooses!

So when ships are caught in the Nexus and destroyed, we know for a fact the passengers have been transported to their own slice of heaven… so what’s all the fuss? “It isn’t Real,” says Kirk later. But what IS real after Death? Would a robe and wings do it for you?

Meanwhile, unimportant subplots seem to be happening in another movie: Data (TNG’s emotionless Vulcan analog) implants an emotion chip and becomes almost as annoying as Jar Jar Binks; ugly Klingon bitches with large, beautiful ta-tas ally with Soren, kidnap Geordi and blow up Picard’s Enterprise, which crash-lands with all the TNG overactors. 78 years later, and still not a seatbelt in sight, as everyone falls out of chairs, climbs back on or stands at a railing, only to fall down again. As Arthur C. Clarke once said, the technology is so advanced, it’s like magic!

The crashed Enterprise is sucked into the Nexus, portrayed as a horrible, explosive death – but the Funny Hat Exposition Lady just said it was Paradise…

All the TREK movies center around McGuffins – none more so than GENERATIONS, whose writers (Brannon Braga, Ronald D. Moore) cop to this lazy methodology in the audio commentary: somehow get Soren to the mountain with the missile, somehow team Picard with Kirk, somehow kill Kirk – no reasoning, no logic, no sense, no science.

For example: if you have the power to go anywhere in time, Jean-Luc, go back to when you first picked up Soren – and don’t. Why go back to the moment of desperation as seconds tick away, trying to stop Soren firing a missile into the heart of a star? If you can pick up Kirk to help you, why not pick up your whole crew?

The writers embarrassingly admit to unnecessary jargon as well. “I’d like to run a level three diagnostic on the port plasma relays. I think one of the generators is fluctuating.” There’s a thrilled extra walking around with a SAG card now. And the geeks have to add another faux-scientific tech detail to their overwrought diagrams of Picard’s Enterprise-D.

And, as usual, NO SCIENCE: Distances in space films are always misrepresented, and by misrepresented, I mean the filmmakers don’t have a clue why space is called space. At the speed Soren’s missile is launched from the ground, it should arrive at the targeted noonday star in approximately ten Earth days. Instead, it gets there in the time it takes to read this sentence. Oh, that’s right, they have faster-than-light travel in the 24th century… if that’s the case, why doesn’t Soren simply commandeer a spaceship at phaserpoint and fly it into the Nexus, which travels at sub-light speed? Sorry, that would be logical. And Spock never made it past the bad script…

Picard leaves his Dickens Thanksgiving and meets the Priceline Negotiator in the Nexus, convincing him of Soren’s danger, whereupon they leave the Nexus and stop Soren through the technological method of fisticuffs. 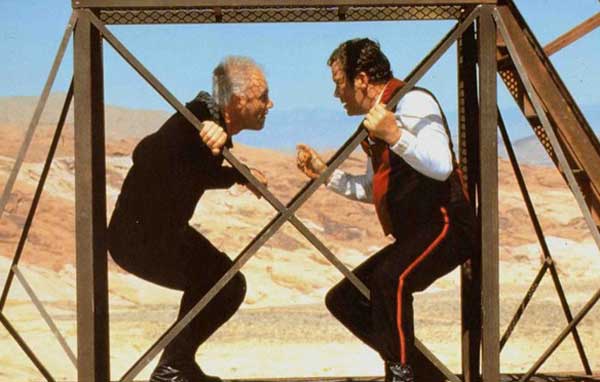 And Leonard Nimoy saw this scene and wept– I mean, laughed.

Now there are Grand Deaths, there are Shakespearean Deaths and Kurosawan Deaths, there are Sacrificial Deaths and Heroic Deaths – but even Leonard Nimoy would call Kirk’s death “gratuitous.” A Meh Death. An unnecessary marketing ploy which ruined an otherwise mediocre movie. Innocuous demise aside, let me get this straight: if Kirk had NOT died, would he have lived out the rest of his life in the 24th century as a fifth wheel alongside THE NEXT GENERATION?

In true Shatner fashion, Kirk squeezes the cheese from his death scene – both times. In his book, Star Trek Movie Memories, Shatner tells of the tear-jerking moment he felt that his torch was being passed: when replying to Picard asking for his help, “Who am I to argue with the Captain of the Enterprise?”

STAR TREK VI: THE UNDISCOVERED COUNTRY was undoubtedly the best of the Original Cast Treks, and if we could boldly go and call STAR TREK: GENERATIONS an Original Cast Trek (for its inclusion of merely three Original Cast), then it is surely the worst. Nonetheless, Kirk’s dying words sum up the odysseys of STAR TREK Compleat: “It was fun.”

And who are we to argue with the Captain of the Enterprise?