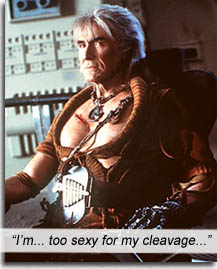 Can we find anyone in the galaxy who can chew more cheese onscreen than James Tiberius Kirk?

In STAR TREK II: THE WRATH OF KHAN, Ricardo Montalban (as Khan Noonien Singh) joins the regular cast of three actors (Shatner, Nimoy, Kelley) and four extras posing as actors (Doohan, Takei, Koenig, Nichols) in the feature film sequel to their TREK television episode of 1967, “Space Seed.” In that episode, Kirk stranded Khan on some distant planet, which requires hefty exposition by Khan when Chekov accidentally discovers him and his Chippendale minions on said planet.

Khan was so pissed after that clunky exposition, he shoved monster puppet earwigs into Chekov’s ears. Paul Winfield, as Starfleet Captain Terrell (one of five actors in this non-actor production) also gets the earwigs, and a dose of rare Action Figure for standing so close to Chekov. The earwigs turn Chekov and Terrell into Manchurian Candidates, for when they meet Kirk later…

Just one of the egregious plot holes that WRATH is riddled with – as Chekov and Terrell could have beamed up as soon as they discovered Khan’s body-oiled brutes were about to capture them. If these people insist on using 21st century plot points, they’ll never remember they’re in the 23rd century.

Khan still has a vendetta against Kirk. In addition, he steals the Genesis Device, a terraforming instrument that Kirk’s son and ex-lover have created, and which for some reason, Khan believes will provide him with some kind of ultimate power – other than making a planet habitable… 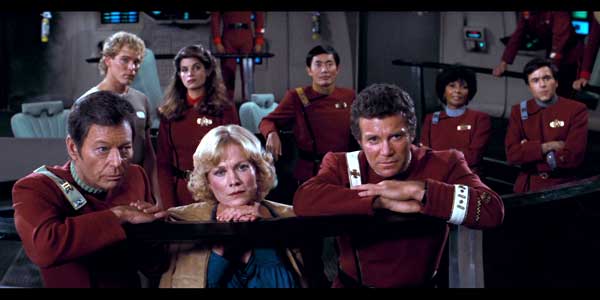 “Sigh… Where do you want to be in five light years?”…

Directed and co-written by wonderboy Nicholas Meyer, WRATH is 100-percent better than its predecessor. Music is better, drama is more involving, the exterior space shots palatable, the computers actually looking like they’re monitoring something legitimate, the transporter beams spiffier, the crew uniforms sexier – and Mr. Spock raising his eyebrow in all the right places. WRATH is a real movie, not an experiment in making a TV show look feature film.

Meyer actually used the same shots from THE MOTION PICTURE for introducing the Enterprise, but he didn’t jack off over them like the previous director and editor (Robert Wise and Todd Ramsay); we can clearly see the difference a succinct director and editor (William P. Dornisch) makes to a production’s slam.

Of course, Spock dies. Wha–? After a studio leak over that plot point caused untold fan uproar, Nick Meyer and his co-writers, Harve Bennett, Jack Sowards, Samuel Peeples and (nominally) Gene Roddenberry, decided to kill off the whole crew in a simulated opening sequence called Kobayashi Maru (proving that even in the 23rd century, there IS no Keyser Soze).

Kirstie Alley joins the Enterprise crew as Vulcan Saavik (during that period in Earth’s history when she was skinny and hot); Spock has been promoted to Captain, and Captain Kirk is still kicked upstairs as Admiral. Titles matter not in Starfleet, it seems, as any time the original 1966 Enterprise crew want to fly off together – they just do.

This time, in pursuit of Khan to retrieve the Genesis Device, which can terraform in minutes rather than millennia. There is an interesting moment as Bones argues with Spock against the Device, “according to myth, the Earth was created in six days…” For those christians who refuse to hear it, he actually said “myth” in reference to the bible. There’s hope for humanity yet. 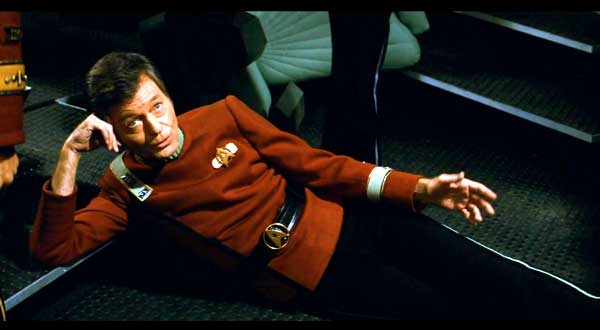 “Stand back, everyone! Anything Burt can do – I can do better!”

Kirk meets his fey son, David (Merritt Butrick), swishing about the science space station like Peter Frampton (with a sweater from his 1984 all-white upper-class Country Club tied around his neck!), with his mother who looks like Dee Wallace (Bibi Besch), one of Kirk’s old flames, now on slow boiler. Uncomfortable family issues ensue…

Khan is genetically engineered to be homo superior – but somehow I don’t think he’d mind too much if we dropped the “superior” suffix, what with his contingent of body-oiled, feather-haired extras who look like refugees from a Pat Benatar video, his gloriously shaved chest-prosthetic (which everyone claims is real – from Meyer to Shatner to Paramount), and his gorgonzola cheese theatrical flourishes.

Adding to his ambiguously-hetero mien, he insists on quoting Melville and other classics as if he’s wearing an ascot and not a prosthetic chest (which I’ll believe is real once I’ve wrapped my teeth around those nipples). Refusing to be outdone chewing scenery by someone with such a thick Fantasy Island accent, Shatner sets some kind of Richter Scale record for melodrama so funny we can’t even laugh at it, with his monumental, head-shakingly furious, “Khaaaan!”

Khan and Kirk have their final battle royale in a starship dogfight to end all plastic toy starship dogfights – in a fish tank injected with dye-in-water effects posing as a nebula, in which these sophisticated starships prove how 21st century their writers are by having to “see” each other to fire on each other. (No such thing as computerized monitoring and targeting in the 23rd century.)

Like all great villains, Khan believes any day is A Good Day to Die, and goes out with a bang by exploding the Genesis Device on his ship while quoting Melville, but I wonder: how did his ship become a planet when it blew up?

But then comes the Death in the Family, super contrived as it may be: Trying to outrace the Genesis blast, the ever-inefficient Scotty can’t provide enough power to the Enterprise, so Spock dives into the Reactor Room to Do Something with the Glowing Something which will Fix Something and allow them to Escape The Blast. The McGuffin successful, now Spock can do his Tragic Acting with KFC skin taped to his face to signify Something Fatal and die face to face with his best buds unable to touch him through the perspex, eliciting reciprocal Tragic Acting from Kirk, who doesn’t have to be asked twice.

It’s what Shakespeareans and Kurosawans would call A Good Death, a Warrior’s Death, and brings a tear to the third eye, as Spock immortalizes the concept, “The needs of the many outweigh the needs of the few. Or the one.”

During the funeral, as Scotty plays Amazing Grace on the bagpipes and they shoot Spock’s casket at the Genesis Planet, Kirk attains Untold Heights of Melodramatic Overacting, “Of my friend, I can only say this: of all the souls I have encountered in my travels, his was the most… human.”

And thus the fanboys were left, all those years ago, pondering at the last shot of the photon torpedo encasing Mister Spock, having landed amongst the primordial Genesis greenery (without any signs of a landing approach tract, just looking like it was dumped amidst the ferns, which it was, by the “science-minded” producers), few realizing that Nimoy himself was instrumental in the decision to kill off Spock due to irreconcilable differences between TREK creator Roddenberry, himself and the studio.

He wanted to be free of the green-blooded ties that bound him to that character. He did, after all, pen that 1975 book, I Am Not Spock.

How wrong he was…