The Search for Plot. 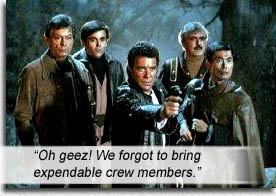 The rumors of his death have been greatly exaggerated.

It was a fantastic climax, bringing tears to the eyes of Terrans and Vulcans alike, as Spock bad his final farewell through perspex, busting his Live Long and Prosper sign while face to face with his lifelong friend whom he could not touch, radiation eating at his body and mind; as Kirk pulled some of the best overacting of his Starfleet career while shooting Spock’s coffin at the heart of the Genesis Planet… The conclusion to STAR TREK II: THE WRATH OF KHAN was a tear-jerking scorcher… But now we find out it needn’t have been so overwrought…

You see, in this sequel, STAR TREK III: THE SEARCH FOR SPOCK, we see that just before his death in TREK II, Spock (Leonard Nimoy), had mind-melded his essence, his “Katra,” into Dr. “Bones” McCoy (DeForest Kelley) with what could have been construed a sexual harassment touch and a single word: “Remember!”

Would it have been too much to ask of the dying Vulcan to MENTION THAT FACT to Kirk, who thought he was gone forever and therefore shot his corpse at the Genesis Planet, instead of keeping his body and rushing him to Vulcan General Hospital?

Enticed back into the fold by being offered the director’s chair, Leonard Nimoy helms a story by Harve Bennett (and Gene Roddenberry, who once again whined about everything, with Paramount saying “yes” to his face and then ignoring his suggestions), that picks up where TREK II left off…

Back on Earth, Kirk (William Shatner) is confronted by Spock’s father, Sarek (Mark Lenard), seeking Spock’s Katra in the lifelong friend whom we believe Spock would have left it in. Tragically, it is not there. But Bones starts acting weirdly Spocky – and everyone realizes Spock’s body must be retrieved from Genesis, to download it with Bones.

Bones-as-Spock tries to hire a black market ship to Genesis, in a cantina sequence that reeks of cheap masks and flimsy plastic sets, with an alien who talks in backward-syntax like Yoda, no less. What could have been just a lousy STAR WARS ripoff (which it is) is saved by the comedic wiles of DeForest Kelley. Of all the TREK cast, he is truly funny; we laugh at Shatner because he can’t help himself, we laugh at Spock for his dryness, but we laugh at Bones because his timing and attitude really delivers a gag; he’s a natural. Goddamit, Jim! He’s a comedian, not a doctor!

Another example of TREK’s inherent disregard for science: when the all-new Excelsior starship pursues Enterprise, Scotty’s removal of a spark plug or some-such McGuffin from the Excelsior, causes her to – now listen carefully – stall with a clunking noise and grind to a stop in the vacuum of space! Where’s Isaac Asimov when we need to ignore his advice?

Meanwhile, on the science vessel orbiting Genesis, Vulcan Saavik (now Robin Curtis, warp-factor-two hotter than Kirstie Alley) and Kirk’s son, David (Merritt Butrick, warp-factor-three feyer than Khan Noonien Singh), discover some terraforming element of Genesis has affected Spock’s man-corpse and rejuvenated it as a boy, who is aging in years by the minute. (I dare any Trekker to explain it “scientifically.”) Actually, the script makes no sense at all. But we’ll continue anyway, just like the filmmakers. 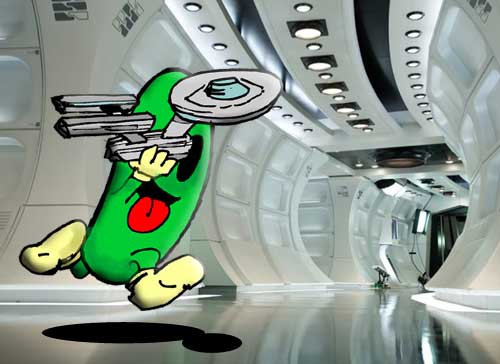 As Kirk’s Enterprise wings its warp way to Genesis, so does a Bird of Prey – a Klingon warship of ferocious design, helmed by Captain Kruge (Christopher Lloyd, chewing plastic scenery like Juicy Fruit), the Klingons seeking the Genesis Device. Don’t know how they plan to use it for ultimate domination, but it should be great for growing a nice terrarium on their Bird of Prey patio.

Spock continues his growth at an alarming rate, so he goes through his seven-year jones for pointy-eared pussy every few minutes. Saavik does a sensually-charged fingerdance with the teenaged Spock, which should outrage a few puritanical thumpers – if they had the wherewithal to apprehend sensuality rather than blatant humping as more conducive to causing social disharmony.

the search for spock: ends before it begins…

The technical prowess of STAR TREK III is once again light years ahead of its predecessors, and Nimoy proves himself a good director. But the story is given away from the outset. Let’s face it, after TREK II’s cliffhanger, viewers are supposedly on edge for The Return of Spock. But knowing Nimoy is pouting there behind the camera kinda gives the game away, dunnit? And Saavik finding young Spock early in the piece seals the deal that our pointy-eared playmate will soon come out and play with us again. So… what now?…

In this TREK, two more Grand Deaths – that of the Enterprise and Kirk’s son: one poignant, one very, very fey. Kirk dupes Kruge’s Klingon Krew onto the Enterprise, then self-destructs it, as he and his man-crew beam down to Genesis’s surface to watch the fireball which used to be their party bus flame into the atmosphere – a heart-wrenching moment for fanboys, almost as bad as the cancellation of the Scott Bakula line of action figures.

David’s death is a little funnier: in a callous gesture, Kruge orders a henchman to kill either young Spock, Saavik or David, “Kill one of the prisoners. I don’t care which,” which prompts David to jump their would-be Klingon assassin, only to get knifed by the Klingon. (Must’ve gotten that weak fighter gene from his mother’s side…) For “tampering in god’s domain” (trying to create life with Genesis) David was punished with death – at least, that’s what the filmmakers say to tenuously connect the neck-sweater-wearing David with the brooding genius of Victor Frankenstein) – but I think they just didn’t want David’s feyness tampering with the masculine domain of the Kirk legacy. 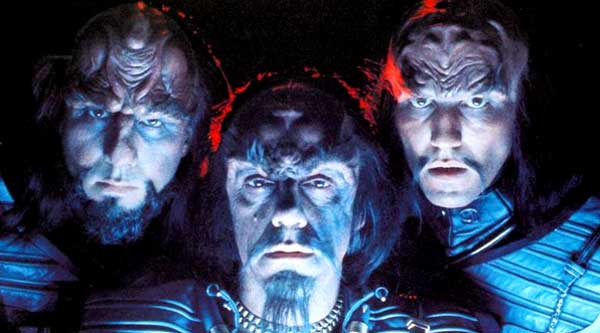 The dramatic climax may have looked good in its day – Kirk fisticuffs Kruge on the unstable Genesis Planet as it quakes – but now looks like two middle-aged hammies throwing movie punches on a cardboard set stolen from 1965’s LOST IN SPACE.

Then it’s all aboard the Bird of Prey to Vulcan, where Bones is thrown on the op table and mystically mind-melded back into Spock, Teen Spock very conveniently having grown to the age of Leonard Nimoy.

But I’m not buying it. You mean after all that turmoil in the last movie to illustrate what sacrifice meant, you’ve just gone through the same amount of turmoil to prove the opposite? What if Chekov or Uhura had died on the Genesis Planet? Think Kirk would have wasted the fuel to go back? There would have been ten irate fan letters and the series would have greenlit production on STAR TREK IV with one less above-the-line paycheck to worry about. But we can understand this flip-flop when we apply Michael Corleone’s credo in THE GODFATHER to the interests of the franchise: “It’s just business.” Spock spells “business” for the franchise. Nimoy did, after all, pen that 1995 book, I Am Spock.