The dancing! The singing! The bearded guy in the bathtub! Are we on a star trek or a pride parade?!

STAR TREK: INSURRECTION is another example of an excellent idea – and I’m not being sarcastic! – ruined by small screen sensibilities and mediocre production values. The very first TREK movie, STAR TREK: THE MOTION PICTURE (1979), also had a magnificent “idea” but could not convey the gravitas of that idea, buried beneath the silliness of computer caramel swirls and Shatner death-pauses.

INSURRECTION, the third TREK film featuring THE NEXT GENERATION (TNG) cast, pokes at the very conscience of America; at that fascist idea of a belligerent alien civilization overpowering a weaker indigenous one. Written by Rick Berman and Michael Pillar, it is framed to constantly remind us of America “relocating” the Native tribes of the Land so courteously. So killingly.

The Federation is aiding a bunch of belligerent aliens with ugly loose skin called Son’a, that want to overrun a planet already inhabited by a race called Ba’ku. The planet’s rings emit a regenerative radiation that keeps the Ba’ku young, which is like catnip to the Botox-challenged Son’a.

But Federation captain Jean-Luc Picard (Patrick Stewart) heads an INSURRECTION with his crew of girl scouts aboard the Starship Enterprise-E – against the Federation itself, reminding the Federation leader, Admiral Old Guy (Anthony Zerbe – watch out! He tried to kill KISS!) that by “relocating” the Ba’ku the Federation is contravening the Prime Directive; the prime directive being a No Interference Clause regarding civilizations led by people who are hot.

Head MILF of the Ba’ku is Anij (Donna Murphy), who is around 300 years old, but looks a smokin’ 42. She touches Picard’s smooth bald head sensually: “I wonder if you’re aware of the trust that you engender?” And we wonder how long it’s gonna take this starship captain to just lean in and insurrect her. But he keeps talking, which is the surest way to lose that ancient minge: “Some of the darkest chapters in my world involve the forced relocation of a small group of people to satisfy the desires of a larger one.” (Though it is more proof of Picard’s smoother approach to women, as opposed to Kirk’s tackle and grope. And speaking of Kirk, the Ba’ku main man is a Shatner lookalike – Daniel Hugh Kelly!)

Admiral Old Guy cockblocks Picard and tells him, “It’s just 600 people” being forcefully relocated off-planet. With a boner the size of a baseball bat, Picard retorts, “How many people does it take before it becomes wrong? A thousand, fifty thousand, a million?” Old Guy replies, uncomfortable around Picard’s erection, “These people were not indigenous to this planet. They will be relocated to continue their evolution–” Picard shouts, obviously near orgasm: “Who the HELL are we to determine the next course of evolution for these people?!” And what happens next is too sexy to bear. 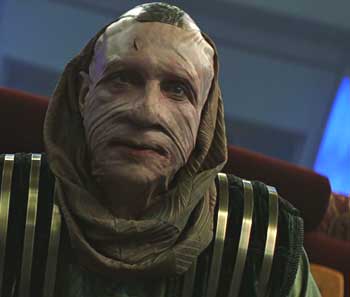 The Son’a are led by Ru’afo (F. Murray Abraham in a stretchy, loose-skinned face). The Federation owns the planet, but Ru’afo has the technology to harvest the regenerative radiation from the rings. Old Guy deludes himself it’s to help billions of people, but Ru’afo just wants to pick up chicks again. The process would wipe out life on the planet – that’s why the relocation effort, that’s why the unholy alliance. But Old Guy shoulda guessed the Son’a had ulterior motives because – ugly people are evil, right?

Such is the conundrum facing Enterprise-E and its cast of glorified extras: feeling youth’s invigoration returning (which accounts for Picard’s singing and dancing), whilst knowing they have to give that up to stay principled. Geordi (Levar Burton) is regaining his sight being in the proximity of the rings, but would gladly give it up to peer through an air filter for ethics; Worf (Michael Dorn) is going through puberty, because even in space, we need a token Klingon; the two window dressing females (Gates McFadden and Marina Sirtis) feel their boobs firm up, but the rings don’t seem to have improved their abysmal acting; and speaking of boobs, there’s first mate Riker (Jonathan Frakes), whom we meet coming onto Sirtis creepily, and are then tortured with the sight of him in a bathtub with her shaving his body hair. While the most beloved TNG character, Data (Brent Spiner), learns how to roll in the hay, literally. He makes the point that due to feeling rejuvenated and young, the crew feel frisky enough to rebel.

Jonathan Frakes directs, with the eye of a man well-versed in television sitcoms. After trying his hand at a few TNG TV shows, starting in 1990, his first directorial feature film was 1996’s STAR TREK: FIRST CONTACT. His second film is this one. And since then (at the time of writing, February 2017), Frakes has directed only TV and two alarmingly mediocre movies (CLOCKSTOPPERS 2002 and THUNDERBIRDS 2004). Any wonder then, that his sensibilities run congruent with TV framing, TV production, TV acting and TV cockblocking?

Once the premise/allegory is set, the rest of the movie is a tiresome rehash of lasers going “pishew pishew,” warships “roaring” through the vacuum of space, explosions onboard starships with electrical sparks flying out of equipment to signify damage, camera tilts to signify being hit with lasers that go “pishew,” bad guys talking when they should be shooting, and the Enterprise-E battling the Son’a ship in a nebula cloud that ignorantly resembles a water-vapor cloud in Earth’s sky, only redder. I can’t even begin to explain how Trekkies have not the faintest clue why there is No Science in STAR TREK…

Even in the future, and even on a spaceship where living space is at a premium, Picard finds air ducts large enough for a man to crawl through.

Funniest moment in the film must surely go to F. Murray Abraham, who, as he is being vaporized, gives a scream that is half-rooster, half-dolphin.

Picard gets the girl – but must leave her when the mission is completed. But it’s not as tragic as he makes it sound. In a universe where warp speed exists, there is no need for goodbyes. If people are only a few seconds away from each other via warp drive or teleportation, there is no such thing as tyranny of distance or time. Picard can come back and see her any time he damn well pleases. He’s only making that excuse about “leaving” because he wants to hit it and quit it. (Hmm, he’s more like Shatner than we thought!) We boyz, Picard. We got your back.

When is he going to admit he only started insurrection to insert his surrection.