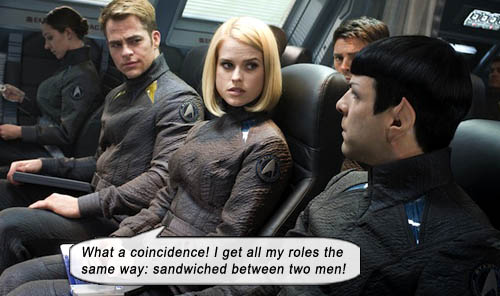 The Wrath Of Cumberbatch.

Hold up a mirror to STAR TREK II: THE WRATH OF KHAN and you get – STAR TREK: INTO DARKNESS.

We get Spock and his infamous line in the first ten minutes, “The needs of the many outweigh the needs of the few”; we get the crisis which can only be diverted by someone illustrating that infamous line by diving into the radioactive reactor room to fix the something-something and save everyone else except himself; and we get – in an issuance of lungbreath rather than a cheese-shout – “Khaaaannn”!

Recall if you will the prime directive of this new STAR TREK franchise (helmed by J.J. Abrams): that these are the characters we know from the movies and TV series – as youngsters. But on a different timeline. So we can find them in almost the same situations, which are reworked to be infinitely more interesting, with much better efx, and with actual acting. 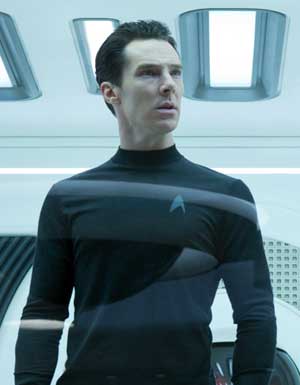 A genetically-enhanced stranger (Benedict Cumberbatch) launches attacks on Starfleet Headquarters, and the Enterprise is dispatched to terminate him with extreme prejudice while he is on a neutral planet. (Shades of Edward Snowden – before Edward Snowden even landed in the public eye.) But this stranger’s motivation is driven by blowback – created by Starfleet Admiral Marcus (Peter Weller), who is, of course, the person ordering his termination without a trial. Like STAR TREK VI: THE UNDISCOVERED COUNTRY, this movie delves into real world issues like preemptive strikes, drones, genocide and small-minded politicians who believe the best solution to any problem is to fire missiles at it.

Captain Kirk faces a moral dilemma: carry out orders without question (which would be unethical and illegal) or disobey orders and do the right thing, which would be capturing the stranger for a trial, which might reveal dark truths about the unethical past of his own Starfleet…

It’s no small joy to see the whole cast from STAR TREK 2009 reunited: Chris Pine is Captain James T. Kirk of the starship Enterprise (still impetuous insubordinate action man, with the perfunctory scene of him being chewed out by his commanding officer, Bruce Greenwood), and Zachary Quinto is First Officer Spock (logical liege to Kirk and action man himself in this outing). Karl Urban is still growling a mean Bones (“Damn it, man, I’m a doctor, not a torpedo technician!”), Simon Pegg is elasticizing English as Scotty – with a moral compass that he gets fired for, John Cho as Sulu gets to sit in the Captain’s seat and issue death threats (not bad for Harold!), and Anton Yelchin as Chekov is still devouring hard consonants as he runs about the bowels of the Enterprise trying to do Scotty’s job.

It’s amusing that the TREK re-booters opted to give the “emotionless” Vulcan, Spock, the only love interest, in the form of crewmate Uhura (Zoe Saldana). (Kirk is still the raunchy bachelor, not remembering past flings, seen in bed with two tailed bitches, and trying to come onto the newest crew member, Alice Eve, here for one gratuitous shot of her 9-body; obvious, as she brings nothing to the role of the admiral’s daughter except her two different-colored eyes that look kinda skewy.) 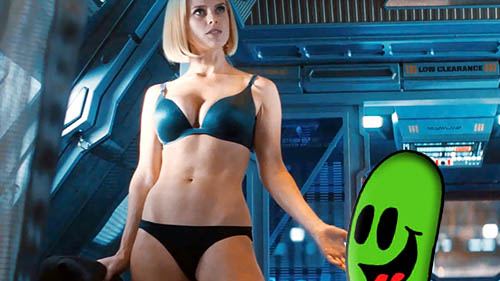 A gratuitous shot of Alice Eve – JUST LIKE IN THE MOVIE!

It is in relation to Uhura that Spock disarmingly elucidates on how he tamps down his human emotions; seems the writers (Roberto Orci, Alex Kurtzman, Damon Lindelof) have done the honorable thing and lifted the concept directly from Leonard Nimoy’s own portrayal of Spock. (Poffy Sez: Vulcan vs. V’ger.)

Scotty pegs the manhunt as the Enterprise tilting into military operation, when their prime directive has always been solely exploration with no interference. (The film’s opening moments allude to the “cargo cult” phenomenon as the Enterprise is seen by primitive natives and worshipped. The military ops remind us of director Nicholas Meyer’s (TREK II, TREK VI) comment about consciously pursuing a military idiom with the uniforms and procedures during the making of the original movies.)

Plot goes deeper as the stranger is revealed to be – exhale sinisterly – “Khaaaaan,” whom we felt the wrath of in TREK II, with his feather-haired, body-oiled brutes, yet here a clean-cut sympathetic figure, trying to save his people from destruction – his people who are all super-soldiers like himself and in hypersleep, in the very missiles that were ordered fired upon the neutral planet! “My crew is my family, Kirk, Is there anything you would not do for your family?” Enunciating like the upper class Brit that he is. (Remember when ALL villains were British?) This was obviously before he got his breast augs, feathered his hair, or spent that time in Guatemala and picked up that atrocious Fantasy Island accent.

And the “neutral planet”? Kronos – the Klingon homeworld – oy, mok-tha! – where we meet the New Klingons for this franchise. They might look scary, but they’re about as lethal as Stormtroopers being pushed over by Ewoks. Oh, Heghlu’meH QaQ jajvam! 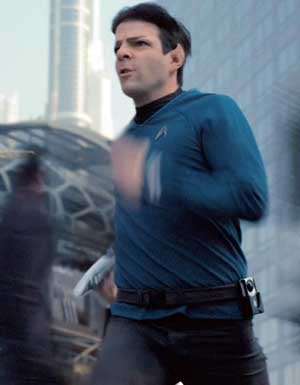 Vulcan on the hoof.

Spock is especially featured as action man, rather than just geeky brainiac; his hand to hand battle with Khan atop a flying transport and subsequent full-tilt chase through city streets is Vulcan dynamite. And he also gets the most touching moment, as he mind-melds with his dying commander (a Grand Death performance by Bruce Greenwood).

Spock also breaks protocol when he contacts once again – oh yes! – Spock Prime. Nimoy! (How come comedy-acting icon Shatner is not involved with this franchise? Nimoy used to be the one who tried to stay out of the TREK spotlight…)

STAR TREK: INTO DARKNESS is an involving thriller that happens to be set in space. Double-crosses, treachery on both sides, unethical and honorable behavior on both sides, and lots of comedic flourishes and nudge-winks, with each character cementing their space within the TREK universe.

I’m not a TREK fanatic, so I wouldn’t know how Trekkies are regarding this new direction, boldly going where no TREK has gone before – into a realistic world with solid characters and no campiness. Way beyond anything TREK’s creator, Gene Roddenberry, could have foreseen. Hold up a mirror to INTO DARKNESS and you will see THE WRATH OF KHAN. But the ham and cheese has been left back there on Fantasy Island.

Orbit Schmorbit.
Once again – in a space-based movie – my little green mouth is agape at the TOTAL IGNORANCE of, or IGNORING of, basic physics and orbital mechanics.When the Enterprise’s warp drive shuts off, the ship suddenly brakes to a stop. In outer space. Where Newton’s First Law – an object in motion stays in motion with the same speed and in the same direction unless acted upon by another force – works for EVERYTHING BLOODY ELSE. They skid to a stop – in a VACUUM. (Recalling the intensely moronic scene in TREK III where a spaceship “breaks down” in space and again skids to a stop. I really really really want to slap a Trekkie right now.)

The Enterprise loses power above Earth’s orbit, and instead of continuing its forward momentum, it simply falls to Earth as if someone dropped it from a tall building. You don’t just “fall” to a planet from outside its atmosphere – you orbit in. Anything in an orbit is technically “falling” to the planet. The orbit is the fall. The irony of this retarded non-science is: the filmmakers take it for granted that simple orbital mechanics is for geeks. But that is the majority of TREK’s audience!  (And don’t call me a geek. I’m a scientist, with a degree from Flagstaff University of Cucumber Kineticism.)

I won’t even begin to question what is creating the ship’s internal artificial gravity. But one good thing: in this timeline, the Enterprise actually has SEAT BELTS! No more falling to the floor while Movie Sparks fly from the consoles of the hyper-advanced spaceship to indicate a malfunction and the camera tilts to indicate the ship is pitching and yawing. Now that’s Science!