Camping in a Row of Future Tense.

I could say this movie was “a whale of a time” but it wasn’t really. Starting with a promising premise, as the story unfolded, it quickly lost its porpoise. (Somebody slap me.) 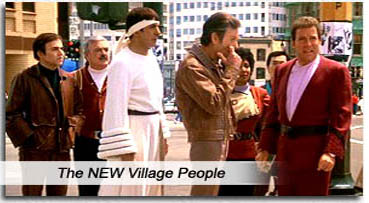 Continuing where STAR TREK III: THE SEARCH FOR SPOCK left off (sometime in the 23rd century), in STAR TREK IV: THE VOYAGE HOME we find the Enterprise crew (William Shatner as Kirk, Leonard Nimoy as Spock and the cast of faves) onboard a commandeered Klingon spacecraft returning to Earth, only to find it being visited by a mysterious cylindrical alien probe hovering above the atmosphere, transmitting in whalesong. Earth’s authorities (the president of the United Federation of Planets looks suspiciously like Rob Reiner) discern the aliens are some kind of whaley protectors seeking their charges on Earth – and since whales were hunted to extinction back in the 21st century, the Federation believes the aliens will now exterminate Mankind in retribution.

Our Enterprise Heroes must travel back in time to 20th century Earth (yes, The Present) to retrieve two humpback whales and transport them Back To The Future to whalespeak to the probe and – I dunno – dupe the probe into believing that all whales are okay or something.

The dialogue regarding time-travel goes thus: “Slingshot around the sun and you’ll achieve timewarp.” “But that’s crazy!” Then they do it.

I kid you not.

With five writers (Leonard Nimoy, who also directed, Harve Bennett, Steve Meerson, Peter Krikes, Nicholas Meyer) one wonders how the slingshot scene could’ve ended up so utterly bereft of sense, not only in its dialogue, but in its execution: judging by the size of the ship as it slingshots around the back of the sun, the sun must be, oh, about 100 feet in diameter. Our Heroes pop out in the mid-80s – and don’t quite look out of place in New Romantic/spandex San Francisco.

Then again, this one’s a comedy – from the jaunty soundtrack during the hospital chase scene to Mr. Spock’s dry one-liners. Some might say that Earth in the 1980s was a comedy anyway, so what’s the diff? Our Heroes land in Golden Gate Park, put the invisible shield on (of course) and fan out in pairs, each on a wacky adventure: Chekov (Walter Koenig) and Uhura (Nichelle Nichols) seek the infamous “nuclear wessels” – to replenish the power that Scotty is always complaining he never has enough of; Bones (DeForest Kelley) and Scotty (James Doohan) seek plexiglass for the whale tank, Sulu (George Takei) and his enormous wang commandeer a chopper, while Kirk and Spock track down two whales at a seaquarium, with Kirk spending all his precious Humanity-Saving time putting the moves on the marine biologist who looks like Elizabeth Shue (Catherine Hicks).

At the time of its release, TREK IV was heartily entertaining – but it is dating fast. In ten years, it’s gonna look as naive as Chekov searching for “nuclear wessels.”

Why is that scene simultaneously a perfect depiction of California (a cop staring at Chekov blankly when he asks, “Where are the nuclear wessels?”) and the most annoying scene that loses our suspension of disbelief? The five writers couldn’t come up with a plausible reaction from the cop?: “Whatchoo talkin’ ’bout Russkie?” or something? Instead, we get this retarded reaction that makes me embarrassed to say I live in California.

After the crew secure all their resources, they rescue Chekov from a hospital (and stupidly beam from the hospital to the OUTSIDE of their ship in the field – why not beam straight INSIDE?), then the chick who looks like Elizabeth Shue forces herself onboard by jumping on Kirk outside the ship just before he beams onboard. Oh, like they can’t escort her off – they’re still just parked in the park, not between wormholes in radiation clouds. After retrieving the whales in one of the most unconvincing, stock-footage whaling-ship scenes in the history of blubber, they “slingshot round the sun” again and arrive with such exactitude at the second they left the 23rd century, that we wonder why more people don’t do this more often and save Kennedy and Gandhi and let Vanilla Ice die in the crib.

Seeing Spock being pushed unwillingly into the water by Kirk (in what I’m sure was a playful ad-lib) is worth the price of the DVD rental, or paying for HBO.

When the crisis is averted, there is a short epilogue where the Elizabeth Shue chick spurns Kirk’s advance. Even if we don’t require Romantic Ending Protocol, he had saved her life and her precious whales – the Absolute Least she can do is allow nuzzling of mammaries for one night; instead, Kirk is blue-balled and can only hope for another sequel where he can get his body-oil on and wail on some chick who is not even his species.

There is a deeper environmental message that goes completely unnoticed and unresolved with the film-makers and the audience, showing humankind in their truest light – and it is not a very charitable view. (In 1986 environmentalism was only a province of hippies and “wacko” scientists who were vilified by every incumbent government.) The alien probe can be considered the Environmental Disaster, as it caused storms over the whole Earth, disrupted radio transmissions and effected electronic failures in every orbiting spacecraft. The Environmental Stabilizers were the whales from the past, which effected a return to normal weather conditions and electronics. But no one seemed to care about long-term strategy: even if the probe leaves Earth alone for now, the humpbacks are doomed to another extinction (because two whales alone cannot possibly re-propagate the species birthing only single calves on average every 2 years) and there is no discussion to ensure there would be whales extant for that time in the distant future when the probe would return to check up on them again (either by cloning, or “slingshotting” armadas of transport ships to bring back thousands of cetaceans). The descendants of these provincial 23rd century humans would bear the brunt of their great-grandpappies’ shortsightedness. Like our descendants will ultimately pay for OUR generation’s squabbling over faux climate solutions connected directly with making money, not saving the planet.

And that, my dear humans, is the story of Mankind in microcosm. As with any “environmental” undertaking, it only benefits the immediate generation. STAR TREK hit on this short term truism unwittingly.

The movie’s premise was never to retrieve whales or save Earth, but to place Our Heroes from the future in the present; to see Spock take on a present-day punk, to see Scotty’s chagrin at having to type on a present-day computer rather than speak to it, to see Chekov threaten to zap navy guys with a weapon they can’t figure out – all situations admittedly funny, but ultimately pointless.

STAR TREK IV is not a tale of salvation or redemption or even rescue – ironically, it is merely a “fish-out-of-water” tale!