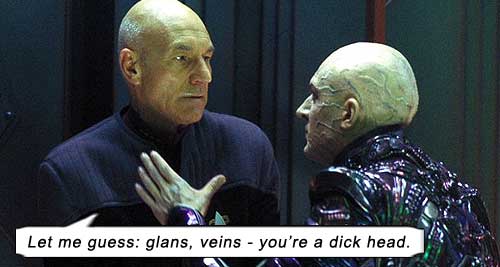 Nature vs. Nurture vs. Nemesis.

Jonathan Frakes is the most useless, insipid character in the STAR TREK universe. There, I said it. (Send your hate mail to 80 Vanilla Street, Who-Gives-A-Shit, CA, Stardate 2350.) Now let’s talk about useless, insipid movies…

STAR TREK NEMESIS is the fourth and last The Next Generation (TNG) adventure, continuing the STAR TREK legacy with beige talking, TV action hero poses and little to no adventure.

Jean-Luc Picard (Patrick Stewart) and his crew of unlikeable and colorless characters encounter a Picard clone, Shinzon (Tom Hardy), who wants to destroy the Earth with his crew of crunchy face-masks and his badass leather longcoat.

Earlier, on a desert planet (where they apparently break the Prime Directive by dune-buggying around and shooting at natives) Picard, Data (Brent Spiner) and Worf (Michael Dorn) locate and collect pieces of a dissembled prototype of Data.

Thus does director Stuart Baird set up the most stunning, evocative, boring, inane story of two mirror images – Picard’s and Data’s – and the philosophical bullshit that goes with them. Picard’s clone Shinzon is a nefarious, clinical warmonger who is slowly dying from the cloning process (or some other plot device) and wants Picard around for pieces of him; while Data’s prototype, called B-4 (hah! I get it!), is a nice guy, but retarded. Did these mirror images become this way through Nature or Nurture?

Picard tries to wean his clone off his conquest jones, “There is something in you that is better than destroying a whole planet.” But Shinzon was so deeply scarred when he was tortured by his creators that nothing can curb his revenge. Ah yes, his NURTURE was through torment, thus becoming Picard’s NEMESIS! Now they can fight over who wears the strap-on tonight.

Speaking of strap-ons, Jonathan Frakes. He can’t wait for his new wife to use one on him – oh, this tall drink of fracking water is married? In an opening sequence only a TNG fanatic would find endearing, we found the Enterprise crew on the deck of an old world sailing vessel during William Riker’s (Frakes) wedding to boring-as-a-blowup Deanna Troi (Marina Sirtis). The fact that they’re on a hologram ship, dressed in 1800’s nautical uniforms is so unbelievably pointless it almost overshadows the fact this is a nothing plot point, that goes nowhere, that no one cares about.

Data tries to tap into his copy’s mind, and discovers a childlike innocence; B-4 was manipulated by his creators for their own ends, and then discarded. It’s a touching  moment, revealing B-4 is not malevolent in and of himself, but an unwitting Manchurian instrument. Ah, so it’s NATURE, because his destructive purpose was programmed into him, like our DNA programs our natures. In this poignant sequence, we realize that the only emotional connection we feel to anyone in this flat film is towards the ANDROID. 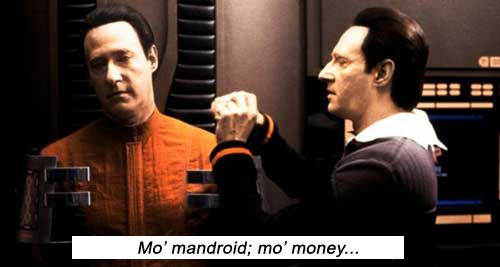 The baby-writers (John Logan, Rick Berman, Brent Spiner), create problems with a million solutions, then try to solve those problems by using the dumbest solution. Like Republicans in congress. Shinzon’s ship rams Picard’s Enterprise. As usual – still no seatbelts! “All hands, brace for impact!” in 23rd century parlance means: whichever desk you’re sitting at, just grip the edge of it a little tighter. While people are falling over from not gripping their desks tight enough, Shinzon’s Viceroy (Ron Perlman in a crunchy mask) is wandering the bowels of the Enterprise beating on Riker. Which means it has the importance of an administrative decision to change letterheads – and just as much energy. Thus, even the Viceroy’s character is pointless – he and Riker could just as well be girly-slapping each other in another movie. Their outcome – whatever it was – didn’t matter one jot to what Picard had to ultimately do: make up a reason to put himself in danger to contrive an ending for the film.

Shinzon deploys a Weapon Of Mass Destruction to blow the Enterprise to atoms. Trouble is, it takes seven minutes for the weapon to deploy, with an ostentatious flowering open of deathly wings that would scare even heartless murderers like Dick Cheney – and is contingent on the ship they’re going to disintegrate not fleeing in warp drive or just driving away slowly. So the Enterprise complies with these Geneva Conventions on Standing Still and doesn’t move, while we wait… wait… wait…

Trying to bolster his reputation as action man, and quash the meme that Kirk was the zenith of decisive Spock-chops, Picard beams aboard Shinzon’s ship kicking ass and taking names, in that sixteenth-century fisticuffs style that seems to work on 23rd century aliens.. Meanwhile that weapon is deploying… deploying… deploying…

Of the mirrored subplots, Picard must destroy his copy, while Data finds a sad peace with his. We even shed a hidden tear for Data as he makes a life-altering choice for B-4 in the film’s explosive climax. Ironically, the only element the filmmakers can use to tug on our human hearts, is the non-human heart of Data. How must that feel to the rest of the cast of glorified extras? Spiner (Data) seems to have written all the best stuff for himself! (Hey, is that weapon ready yet?…)

Thank you, STAR TREK, for going out on a bland film with one likeable character that isn’t even human. NEMESIS being the last of the exhausted TNG franchise, they will thankfully never again Make It So.