Attack of The Motionless Picture. 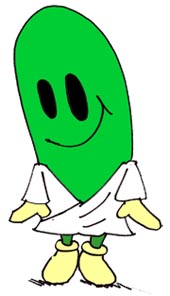 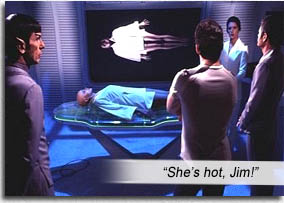 Laden with anecdotes from the making of seven STAR TREK movies, William Shatner’s Star Trek Movie Memories (co-author, Chris Kenski), is – alas – light years more entertaining than the movies it describes. Shatner’s candor and dry wit propels Movie Memories like the warp drive on his vaunted Enterprise chariot. Alas, even applying warp drive to these STAR TREK stinkers would do them no service. Of course, there are the exceptions (the aficionados cry out, “The evens – II, IV and VI!” and of course, they’d be right…).

But hold onto your pointy ears! We can only watch these one at a time…

Maybe Harlan Ellison was first to coin the phrase, maybe it was just synergy, but STAR TREK: THE MOTION PICTURE was roundly hailed as “The Motionless Picture.” For good reason.

It doesn’t move. At all. In space no one can hear the grass grow.

Witness the stagnant immobility as Captain Kirk (William Shatner) and Scotty (James Doohan) silently circumnavigate the USS Enterprise in a docking shuttle, in loving reunion, as a Captain visually undresses his ship after a long separation, and you will heartily, if not sleepily, agree.

Which is ironic, considering the firestorm of indecisive action that birthed the movie Phoenix-like from its cheap, unsuccessful 1966 series that somehow spawned a cult in reruns. When fan outcry for a TREK movie reached a tipping point, Paramount execs dillydallied over whether to target the silver screen or the boob tube with a bastardized concept called STAR TREK PHASE II; a revolving door of writers and directors came and went, innumerable rewrites, pulling plugs, with TREK’S creator, Gene Roddenberry, whining about every aspect of the production from the crawlspace he was “promoted” to – until – 20th Century Fox released a tiny little thing called STAR WARS…

Suddenly, in true, characteristically gutless, tunnel-visioned fashion, the heads at Paramount greenlight a “space adventure” of their own – STAR TREK: THE MOTION PICTURE.

Eventually directed by Robert Wise, written by Alan Dean Foster, Harold Livingston and a host of poor, uncredited bastards who got the pointy end of Paramount’s stick, STAR TREK: THE MOTION PICTURE hits the 23rd century like a space version of THE WHO’S TOMMY – the sublime and ridiculous in an arranged marriage that serves cheap champagne at the reception with the best man getting drunk and falling into the cheese brioche.

Excellent concept, terrible execution. STAR TREK: THE MOTION PICTURE is a plodding masterpiece; brains but no balls; a whole lotta nothing, to say a small lotta something. Remember this was way back in the 23rd century, long before supporting cast were actually required to act, and just after they updated their onboard computers to 1984 standards.

When three Klingon ships are destroyed by hokey special effects, by an entity traveling towards Earth to wreak more hokey special effects, Starfleet sends Admiral James Kirk to stop it; in a reconditioned Enterprise, now captained by Decker (Stephen Collins, wearing his bestest teddy bear pajamas), whose Federation Starship crew is made up of a bunch of humans and one guy in the back wearing a funny mask.

They pick up Bones (DeForest Kelley, as irascible as ever), Spock (Leonard Nimoy, dressed as Batman), Scotty (ever-complaining James Doohan) and the three Ringos – Sulu (George Takei, who can’t act), Chekov (Walter Koenig, who can’t act in English) and Uhura (Nichelle Nichols, who can’t act with a decisively street Mod Squad ‘do).

Rounding out the cast ineffectually is Gene Roddenberry’s nepotistic wife, Majel Barrett, as Nurse Whatever, whose key scene involves spraying some shit on Chekov’s injured arm, like she’s acting as if she’s spraying some shit on Chekov’s injured arm. This is just after Chekov injures his arm by having it near some sparklers that suffice for malfunctioning electronics and crying “Aagh!” like some community theater actress.

The Enterprise encounters a wormhole due to Kirk not reading the instructions – a wormhole that looks suspiciously like the delay effects in old Jimi Hendrix videos – and eventually runs into the alien entity that destroyed the Klingon ships, called V’Ger, a magical artificial intelligence that adheres to no scientific or technological reality; you know, like all space films made in Hollywood.

V’Ger takes over Ilia’s mind and bequeaths her a miniskirt bathrobe so short we can see her v’ger. Then the Enterprise flies into quaint dye-in-water effects supposed to be the innards of V’Ger, and the crew stand around the bridge and look at the wavy colors changing on the monitor. For about three hours.

There are two questions: In the first hour, “Where the hell is Spock?”; in the second hour, “What the hell is going on?” Well, Spock eventually appears in his Batman outfit, making Kirk spurt in his pants, but the answer to the second question seems to be More Special Effects.

The concept turns out to be excellent: V’Ger is the Voyager space probe that Carl Sagan and NASA launched to the cosmos in the 1970s as a message of amity from Earth to the universe. After traveling to a distant civilization of robots, Voyager gained cognizance and was now returning to Earth seeking its creator.

STAR TREK tries to flex its effects muscles – and strains them. Even with effects legends, John Dykstra and Douglas Trumbull, the technology just wasn’t good enough back in ’78; even with George Lucas’s ILM on the job – but we can be pretty sure Lucas held his A-Team close to his chest, for his own little space dalliances.

After feeling like a fifth wheel for the body of the movie – except when cultivating the emotionless Ilia – Decker sacrifices himself by stepping into Voyager and becoming a human-machine symbiote (or something that glows a lot) while everyone else runs and anti-climactically escapes.

Thus: the human adventure begins. Be still my v’ger.

The Starship Enterprise and the Millennium Falcon: two sexy ships show their afts.

The biggest battle facing the Enterprise crew was not against anything in the STAR TREK movie – it was against STAR WARS. And they lost. On all counts:

ACTION: STAR WARS was actually “action-packed” as advertised; TREK’s idea of action was sparks coming out of a console and talking a lot.

SCIENCE: Everyone associated with TREK – the producers, actors and fans – love crowing about how TREK is more “scientific” than STAR WARS. And we laugh so hard that cheap champagne comes spurting out our noses. No less a science avatar than Isaac Asimov was the science consultant on TREK! And they sure went a long way to not listen to anything he said… In the end, TREK contained as much “science” as WARS – none.

ACTING: As bad as the acting was on STAR WARS (with Hamill, Fisher and those Empire extras), STAR TREK takes it to a new level of Hayden Christensen.

EFX: Though ILM was responsible for TREK’s effects, CGI was not invented yet, so the dark Chromakey outline around every effects shot makes everything look faker than Shatner’s hairpiece.

EDITING: by half-asleep Todd Ramsay. As Shatner describes in his book, the producers were so enamored with their effects, they opted for long, loving pans around everything in space, from the Enterprise to V’Ger – no wonder Ramsay spent his time sleeping.

INCONSISTENCIES: It does not bode well for the Intelligence Quotient of Trekkies (or Trekkers, or – as we normal people call them – Virgins) when they purport to being such “science geeks” and then act as apologist for all the non-science in TREK.

I will only give one example of the overarching stupidity and ignorance of “science” in this movie, for lack of space (being the final frontier an’ all):

The energy force V’Ger is reported as “86 AU” in size. “AU” is an Astronomical Unit, which is the “distance from the Earth to the Sun” – about 93 million miles. Do your first grade math: 86 times 93 million equals 7,998,000,000. That means: V’Ger is 7 billion, nine-hundred and ninety-eight million miles large. V’Ger is also reported as being near the Moon on its way to Earth. The Moon is 2,160 miles in diameter and approximately 240,000 miles from Earth. What’s wrong with this picture? You with the funny mask – answer me!

Vulcan vs. V’ger.
Persis Khambatta as Ilia is supposedly expressionless because she is playing a human taken over by a machine. That’s her story and she’s sticking to it! But Spock was meant to be an expressionless drogue as well. Why then, does he seem so much more compelling than Ilia, even though she’s wearing a much shorter skirt than him?

It’s because Khambatta lucked into a role where her inability to act dovetailed nicely with her non-emotional character. Like Arnold in his TERMINATOR movies.

Whereas Leonard Nimoy can act and lucked into a role where he wasn’t required to, but went where no man has gone before. Nimoy has always maintained that he played the Vulcan Spock – the man with no emotions – as a man WITH emotions, who had to rein them in. And that, he tells us, “is where the great drama of Spock emanates from.”