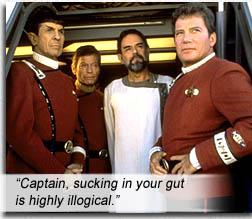 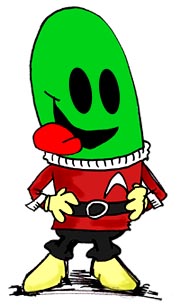 Oh, what a marvelous disaster! From Shatner’s book, Star Trek Movie Memories, we read about Shatner’s grandiloquent vision for the greatest TREK adventure of all – the search for God Itself! The Final Frontier! We learn of the hordes of barbarians at the gate, of the ten Rock Men finale; of the sweeping alien farscapes and cerebral ponderings on the quest for God, the need for God, the existence of God… and then we run aground on the studio complaints, crews being late, loss of light, story changes, budget constrictions, time delays, the middle-background whining of Gene Roddenberry and – waah! – how hard it is to direct and – waah! – how they tamped down his largesse and – waah! – we end up with: STAR TREK V: THE FINAL FRONTIER. A marvelous disaster.

A Vulcan named Sybok (Laurence Luckinbill) pirates the Enterprise in a misguided quest for Sha Ka Ree – the abode of God, which is apparently somewhere in the middle of the galaxy, a vantage point from which (we surmise) all prayers and oblations can be heard and dealt with in timely fashion. (Sha Ka Ree was a play on the name “Sean Connery,” whom Shatner originally wanted as Sybok, but Connery was making a movie with an actual budget, INDIANA JONES AND THE LAST CRUSADE.)

Sybok hypnotizes Kirk’s crew to go along for his ride by healing their inner demons – an easy task with the extras known as Cast Regulars, Sulu, Uhura and Chekov (Takei, Nichols and Koenig); not so easy when it comes to Scotty (James Doohan, skulking about the bilges of the reconditioned, malfunctioning Enterprise NCC-1701-A) and The New Three Stooges, Moe Kirk, Larry Spock and Curly “Bones” McCoy (Shatner, Nimoy and Kelley).

I’ll say one thing for Shatner (who also co-wrote with Harve Bennett and David Loughery): he intimately knows which TREK characters work and how to work them, as Kirk, Spock and Bones are holding hands in almost every scene. From the opening camp scene (“camp” as in mountain-climbing in Yosemite, not “camp” as in fey) to their imprisonment in the brig by Sybok, to their beyond-silly group hug on Spock’s jet boots as they shoot up a 78-level shaft that couldn’t possibly exist in the Enterprise (to paraphrase ZOOLANDER, “Are these levels for ants?!”), to their meeting with God, The Three Musketeers fence off each other like the “much-loved characters” they’ve become, bookending the movie with another fireside camp scene (this time, the “other” meaning for sure, as they fade out singing Row Row Row Your Boat…)

As with all STAR TREKs, the humorous and impassioned scenes involving The Three are tempered by the ridiculous – Uhura getting the attention of some desert dwellers by doing a nude feather dance (which is not only embarrassing, considering she thinks to tempt them with her 70-year-old, wrinkly ta-tas, it’s kinda icky as well), or another cantina sequence (after the failed attempt in TREK III), where TREK once again displays its utter inferiority to STAR WARS.

A disturbing scene shows McCoy euthanizing his father on his deathbed, Sybok coaxing the memory from McCoy to absolve his pain with catharsis; Spock is shown his birth and subsequent spurning by his father as being “too human.” These scenes are the heart of darkness Shatner was aiming for.

Unfortunately, couched within STAR TREK, before too long we are bound to slam into something idiotic, such as Sybok giving an uneducated monolog to justify his quest, “People thought the world was flat – but Columbus proved it wasn’t!” (shows how much he knows about Earth history – Columbus was establishing a trade route, not proving the Earth’s sphericity); “People thought the sound barrier couldn’t be broken – it was!” (And this time, when he could cite the man who actually attempted and succeeded in that singular quest, Sybok doesn’t – Chuck Yeager, you Vulcan C-Student!)

For every dramatic hammer (like Kirk affirming, “I know who I am! I don’t need to confront my pain!”) there is a nail in the coffin (like Kirk fighting a three-breasted cat-lady…).

The hammer: With the Enterprise, Sybok intends to breach The Great Barrier – a wall of special effects that no one can pass through alive. The nail: Apparently, all it takes to breach the Great Barrier safely… is to fly through it.

The hammer: The most authentic Klingons yet in the series pursue Kirk for the glory of killing him, chok-tha-ing quite fluently in what was established as actual Klingon dialect, created by linguist Marc Okrand. The nail: Uh, why do you need a PERISCOPE on a space ship?

Spock gets to nerve pinch a horse, Chekov gets to sit in the Captain’s seat; Shatner’s real life daughter is onboard as an Ensign and she’s as bad an actor as the rest of the extras; Uhura and Scotty are an item – but if I wanted to see something that weird, I’d watch the cantina sequence at Mos Eisley.

After numerous annoying plot holes and cinematic deficiencies, Sybok and The Three shuttle down to the planet of Sha Ka Ree to meet God. This is where the profound should have come into play as Our Heroes seek proof from the “deity” they confront – McCoy: “I doubt any god who inflicts pain for his own pleasure!” – instead, we get the perfunctory evil alien with laser beams shooting out of his eyes.

The final scene is a funny, touching moment as Kirk is overjoyed to see Spock onboard a Bird of Prey and is about to hug him, when Spock interjects, “Please, Captain, not in front of the Klingons.”

Many argue that STAR TREK movies must be judged in the time period they were made – an apologist remark usually pertaining to the low budget efx that every TREK up to V is victim of. But that is not why the TREK movies are such phenomenal space junk. We can live with dated effects; what drives us insane are the egregious non-performances from every single supporting cast member and absolutely illogical and unscientific plot points, bad editing, poor direction, a general sloppiness and an overwhelming plastic dynamic.

But go ahead and compare 1989, apologists, if it gives you a sense of justification: BATMAN, INDIANA JONES AND THE LAST CRUSADE, GLORY, CRIMES AND MISDEMEANORS… ulp! Or go further back: EMPIRE STRIKES BACK (1980), 2001: A SPACE ODYSSEY (1968), PATHS OF GLORY (1957), SEVEN SAMURAI (1954)… We feel stupid even comparing TREK to these “real” films, as if its plastic pedigree (the 60s series) gives it leeway for lackluster acting, stupid plot holes and funny masks that we’re supposed to take seriously.

The final frontier will be when STAR TREK steps out from behind Gene Roddenberry’s skirts to proclaim it is part of our universe, to join the movie-making community on equal grounds, to boldly go where every other filmmaker has gone before – film school.