Even as STAR TREK finds its warp stride with STAR TREK VI: THE UNDISCOVERED COUNTRY, the franchise runs out of dilythium crystal. Alas, TREK VI would be the last TREK movie to feature the complete Original Cast; before the death of DeForest Kelley (1996), the death of James Doohan (2005), and the outing of George Takei and his enormous wang (Gay Mardi Gras 2006). 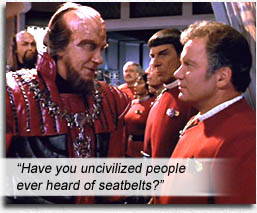 TREK VI would take us where no TREK has gone before, exploring disturbing themes and ethical conundrums, making sociological references from the whole spectrum of history and literature, and the principal cast pretend-acting better than they’ve ever pretended to act before.

First thing we notice is the music (by Cliff Eidelman); no familiar themes, but dark, “feature film” ominousness. The look of the film, the feel of the production – is robust. No more toy models floating across a Chromakey blanket of stars. This is the first TREK to utilize that stunning new invention called – CGI.

The Klingon race is dying and Spock (Leonard Nimoy) gives a sermon explaining how Starfleet, their sworn enemies, should help. Starfleet sends Kirk (William Shatner) as ambassador of peace, because “only Nixon can go to China” (Kirk hated Klingons like Nixon hated China, yet Nixon visited diplomatically in 1972, which spoke volumes).

But conspiracy is afoot. Klingon-human peace scares those who would rather retain the status quo, for the convenience of having common enemies. Even some who want peace cannot conceive of it, thereby psychologically abetting those aggressively against it. This is one of the many concepts in TREK VI that raises it as far from the rest of the series as Altair 7 is from Rigel 3.

STAR TREK VI is all over its Cold War allegory like logic on Spock. But as a science fiction movie, it is still like English on Pavel Chekov – painfully uncomfortable. In the opening scenes, the Excelsior, captained by Sulu (Takei) gets caught in a “subspace shockwave” (which is impossible if these Federation starships have faster-than-light capabilities; anything exploding in the vacuum of space can only propagate at the speed of light, which means a starship can outpace it). Annoying enough. But during this event, the whole crew is thrown to the floor… Can someone put some goddam seatbelts on this 23rd-century dweeb-chariot so that everyone can stay seated and perform their jobs of piloting a spacecraft efficiently?!

The Original Cast (minus Sulu) ends up onboard the old Enterprise NCC-1701-A. Again. And under Kirk’s command, meet and greet regal Klingon Ambassador Gorkon (David Warner, Lincoln-esque in bearing and diplomacy), with his snide, belligerent General Chang (Christopher Plummer, absolutely mokh-tha, as he starts chewing scenery even before opening his mouth).

Diplomatic dinner follows, where uncomfortable clashes of culture are spiced with humor, Gorkon opining that Shakespeare is best heard in “the original Klingon.” He makes a toast to “Peace – the undiscovered country” (paraphrasing Shakespeare’s idea of Death being the undiscovered country, from Hamlet’s “To be or not to be…” speech, Act 3 Scene 1).

Mysterious events lead to Kirk and Bones (DeForest Kelley) being framed for Gorkon’s death and exiled on a gulag planet, while Spock and Vulcan Lieutenant Valeris (Kim Cattrall, hotter than a starship’s afterburners with her little pointy ears and white bandeau and shaved… sideburns) try to discover Gorkon’s real killers onboard the Enterprise.

When Kirk and Bones are in prison, Kirk admits he could not conceive of a world without having an enemy to hate. His prejudice was not just against a particular race – it was against a frame of mind! Like the new wave of Klingons here on Earth – Republicans – cannot conceive of a world they themselves say they want, so they fearmonger to retain the Old World modes of thought. Realizing deep down there ARE no real enemies left, only differing frames of mind. For the fear they exhibit towards change at every turn, they are no different than “the terrorists” whom they fearmonger against. 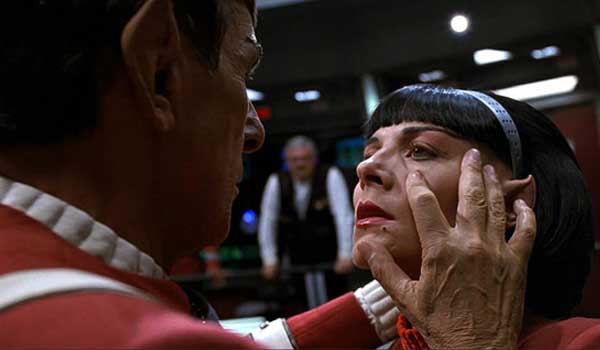 Now this is the kind of logic I like!

Onboard the Enterprise, the conspiracy is uncovered. Spock performs the most sensual mind-meld this side of the planet of green-skinned women, on Lieutenant Valeris, who moans and whimpers like she’s riding a sybian on the Howard Stern Show. It’s not sex. But it’s the best sex scene STAR TREK has ever had.

Valeris and General Chang (quoting Shakespeare at every opportunity) lead the conspiracy against peace (as if proud descendants of Sarah Palin and Dick Cheney), stirring chaos for the simple reason they are terrified that a sea change in society would leave them bereft of purpose.

So it is ironic that Kirk later laments to Spock, “Is it possible that we have grown so old and inflexible we have outlived our usefulness?” Their own prejudices stunted their forward momentum, and therefore their usefulness as leaders: Klingons killed Kirk’s son (in THE SEARCH FOR SPOCK), so he could never forgive the race; while Spock’s respect for Vulcans blinded him to Valeris’s treachery.

Kirk also confesses to Spock, “You’re a great one for logic, I’m for rushing in where angels fear to tread. We’re both extremists. Reality lies somewhere in between.”

It’s hard to believe we are watching a STAR TREK movie with themes that shine brighter than Sirius A.

Yes, there is still willful “science” ignorance and plot holes so big you could drive a herd of Balthusian blubber beasts through them:

Two Kirks for the price of one overactor.

the future is the past revisited

Director Nicholas Meyer comments on how the TREK canon grew so revered – much of it to do with this striking film:

“One of the few theories that caught my fancy is that in literature, art and in experience, everything is leading up to the present moment – in other words, when you read a book or see a film or view a painting, the sum total of all your experience of world history and art is contributing to your understanding of that painting…. It also works backwards: that what you see now will inform things that you go back and re-read and re-view; for example, if you look at the TREK TV series, you will find them immeasurably enriched by the movies that came after them – because you bring your consciousness of the films to the original episodes. And the original episodes get better, more dense, more complicated…”

Writer Denny Martin Flynn adds: “When you look back at the early TV episodes, the cast of seven characters were very shallow. So many possibilities were never entered into; only realized later in the movies…”

Gene Roddenberry, the creator of STAR TREK is given way more credit than he deserves for the popularity of TREK.

There is more meat in TREK VI than in the other five TREK movies combined. It would inform everything that came before it. For example: 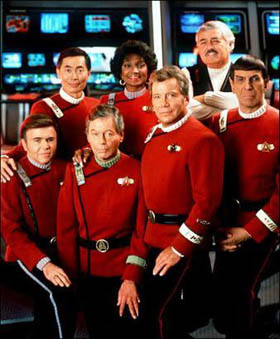 The Enterprise crew save the day in a blaze of hasty action sequence, that seems tacked on to provide a headrush final curtain. Bones gets to work with Spock on a magical torpedo (that pinpoints that “exhaust pipe” spewing whatever into space and goes after it like a Greenpeace warrior), Scotty gets to be an action hero, Kurtwood Smith gets to be the blind President of the United Federation of Planets, Sulu gets a Zorro entrance as captain of Excelsior, and Kirk performs a dynamic fantasy-man dive to save the President, worthy of ten barrels of German cheese. And after the flesh-crawling “I’ve-learned-something-today” speech, there’s a slow clap. This movie has everything!

When Sulu wryly tells Kirk, “Nice to see you in action one more time, Captain Kirk!” we feel the finality thump into our chests. The cast, as Danny Glover might say, is gettin’ too old for this ship. As their signatures are traced over the starfield backdrop, it is like a subtle goodbye. Very sad. Yet there is joy in the knowledge that before their final farewell, STAR TREK at last got it right.

Now all they need are seatbelts.