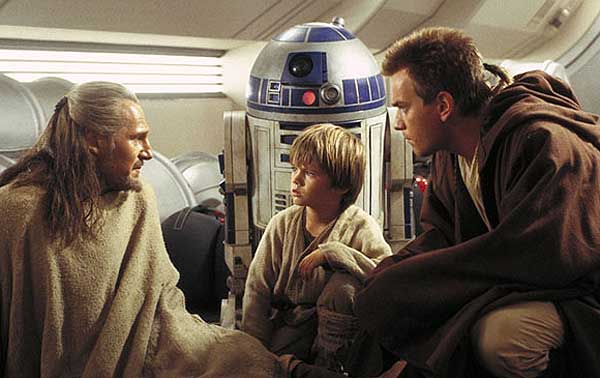 Both these entities were done in NOT by lack of funding, backstabbing competitors or unbalanced advisors. Ironically, they brought their downfalls on themselves through a surfeit of funding which removed them from any competition and tipped them into insular universes within their own strangely shaped heads.

All that said, STAR WARS: EPISODE I – THE PHANTOM MENACE is simply amazing. It is absolutely astounding how much nothing this much money can buy.

Now remember, PHANTOM MENACE was birthed into the world long after the STAR WARS canon entered world vernacular, like red corpuscles in the Earth’s bloodstream. So it is all the more painful to see the cancer of The Prequels eating our childhood dreams away.

George Lucas (Mr. Insular himself) writes and directs and ruins as he goes. If he had just surrendered his chokehold on his writer’s pen and precious director’s chair, we wouldn’t have this facsimile of a movie sullying the legend that he himself brought to life 20 years ago.

an even longer time ago…

Is anyone buying this?

Invoking the Jesus myth, Anakin’s mother simply blurts to Qui one day that she “just got pregnant” with Anakin – you’d think she’d save the high maintenance girlfriend talk until after dinner and drinks, but I guess she really had the hots for Qui and his Steven Seagal ponytail and wanted to come clean with him about her divine stretchmarks.

By now, Liam Neeson is not even phoning it in – he’s faxing it, his eyes so glazed over with boredom he never once focuses on all the imaginary CGI shit around him, his inflection never rising above audition level.

Qui-Gon discovers the irritating kid is blessed with a lot of little animals living in his blood, called midi-chlorians. Rather than produce whiter whites – which is what they sound like they do – these midi-chlorians contribute to that mystical power that runs the galaxy – The Force. *I* didn’t say it. George Lucas did. George tells us that the more midi-chlorians in your bloodstream, the stronger The Force is in you. So in EPISODE V, when Yoda speaks to Luke about The Force imbuing the rocks, he was talking about the rocks’ bloodstream? And when Ben Kenobi and Yoda speak of The Force binding the Universe together, they mean billions of these little animals floating around in space? I get it now, George. Really, I do.

We could only watch in helpless horror as George Lucas takes apart his toy and tries to put it back together again, like a retarded Rain Man.

If the rule you followed brought you to this, of what use was the rule?
— Anton Chigurh, NO COUNTRY FOR OLD MEN.

At a Jedi Council, which looks more like an AA meeting for fanboys in funny masks, Qui-Gon tries to sell the midi-chlorians story about young Anakin – but no one’s buying it. They’re on a higher plane of universal consciousness – Prophesy. And we see that it really worked out well: with all their vaunted prophesies and foresight on Anakin being their “Chosen One” who would “bring balance to The Force” – he becomes DARTH VADER!

Oh, and I’m the asshole for being sarcastic? 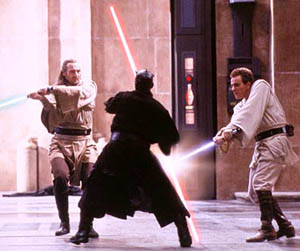 It is here that Qui-Gon must die. Not because Darth Maul’s midi-chlorian count was higher (which is obvious if he bested Qui-Gon), not because it served the plot, but because Liam Neeson’s fax machine ran out of paper. Neeson showing his utter contempt for this project by not allowing Lucas to use his spirit form in any further prequels/sequels. Kenobi and Yoda appear to Luke every time he stubs his toe, to offer sage advice on how to rub the lotion on its skin or it gets the hose again, yet when Kenobi was a young man in need of spiritual guidance, Qui-Gon, a supposedly powerful Jedi Master, can’t bother to scare up the ectoplasm.

But why do Qui and Obi insist on battling Maul – an obviously superior dueler – with lightsabers when they could have just as easily used a blaster on him? The Jedi ethos seems to purvey that – as in HIGHLANDER – a Jedi should not and cannot be killed unless he is swashbuckled to death by a beam of light. Or do they insist on using this obsolete lightsaber technology due to a misplaced honor code?

Han Solo says in EPISODE IV, “Hokey religions and ancient weapons are no match for a good blaster any day.” Proven time and again throughout the series: Obi-Wan himself uses a blaster against General Grievous in REVENGE OF THE SITH (and then complains, “How uncivilized!” – that “uncivilized” blaster could have saved us ten minutes of padding with the lizard-riding and redundant quadruple-lightsaber swooshing); also in SITH, Jedi across the galaxy are brought down not by lightsabers, but by blasters. Easily. Midi-chlorians on vacation that day?

If there’s that much “honor” among Jedi, why do so many of them turn to the Dark Side? And upon turning to the Dark Side, why then bother using the “honorable, civilized” lightsaber? You’ve already turned to the genocidal, dishonorable Dark Side – d’ya think killing kids with a lightsaber is more “honorable” than with a blaster?

Meanwhile, down on the planet of wimbleys or something, a completely illogical land battle is taking place between Jar Jar Binks’s Gungan race of agrarian ostrich-riders and Imperial robots who can’t aim. Illogical because the Empire’s firepower can obliterate the Gungans and they insist on taking the battle down to Gungan level by employing ineffectual ground troops – those absolutely useless, waste-of-evil-taxpayer-dollars “battle” droids. (Like these futile drogues who never hit anything even know what “battle” is.)

These things are robots – shouldn’t they have AIMING MECHANISMS? For economic purposes, shouldn’t their guns be built into their arms, with re-loadable magazines slotted into their bodies? At least those rolling droids have built-in guns – but what’s the point if the guns are programmed for “Fire Arbitrarily in General Direction of Enemy and Hope for the Best”? (And no, I don’t know what those rolling droids are called, but I’m sure you can find out on the Star Wars Information Line at 1-800-NO-GIRLFRIENDS.)

After we realize the movie has degenerated to every single pixel onscreen being a special effect, we take a nap. When we wake up, everything has worked out fine in the end, just like a big fat family sitcom in space. With no one ever figuring out just who or what the “phantom menace” actually is.

No two synopses for PHANTOM MENACE can agree on what PHANTOM MENACE is really about, except that it introduces to cinema the most annoying kid in the world and claims he’s Darth Vader. What can really be learned from these Prequels, except that there was a lot more sky traffic – and the Empire seemed to have cleared up that problem by EPISODE IV.

Big Government. Who needs it? We do. If they can clean up sky-traffic like that, go right ahead and keep phantom menacing me, midi-chlorians, maxi-chlorians, ultra-chlorians, I don’t care – as long as I can get across town for a Hefeweisen with a buddy without busting a blood vessel stuck in the belly of a steel snake and giving the finger to ten jerks who drive as if they owned the skies like the Trade Federation…

And like Big Government, PHANTOM MENACE talks too much, dazzles with special effects, overdoses on misdirection – and says nothing. 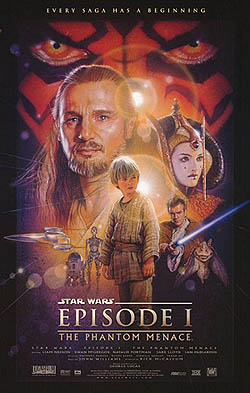