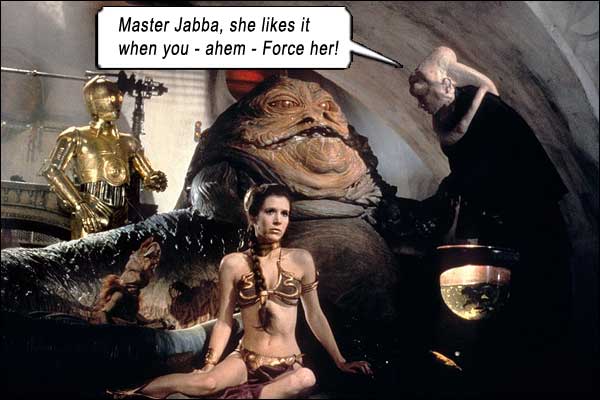 Another day. Another Death Star.

In the last of the STAR WARS hexology, the Galactic Empire has returned with another planet-sized space station to terrorize the galaxy. And the Rebel Alliance has returned to break it.

The Jedi Knights have returned as well, with Luke Skywalker continuing the legacy of the humorless old farts by dressing in black and channeling Burt Lancaster. 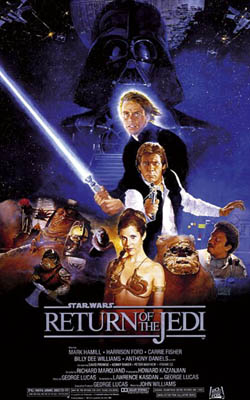 George Lucas and Lawrence Kasdan write, and Richard Marquand directs RETURN OF THE JEDI, opening once again with John Williams’s now-iconic, epic fanfare, and the characteristic text crawl that says nothing. Pan down the blanket of stars to a new and improved, planet-destroying Imperial Death Star, under construction – a fantastic visual of skeletal steel framework on the scale of a planet. In ominous chords, the Imperial Sith Lord Darth Vader (walking as David Prowse, talking as James Earl Jones) makes a surprise visit to this space station to ensure progress continues apace.

The Emperor himself (Ian McDiarmid, wizened beyond the help of Olay) is scheduled for a visit and Vader will tolerate no delays; after all, ruling the galaxy with an iron fist cannot proceed without the iron fist.

Meanwhile, Our Heroes (C-3PO, R2-D2, Han, Chewbacca, Leia and Luke) are in another fine mess, in the palace of evil Jabba the Hutt. (The way Jabba is sometimes described as a “vile gangster” or “crime lord,” one would think he is just a GODFATHER-type mobster, even though he resembles a combination of stale blubber and cancerous liposuction runoff – come to think of it, he kinda does look like Brando…)

Han Solo (Harrison Ford), frozen in carbonite at the conclusion of EMPIRE STRIKES BACK, is now a decoration on Jabba’s wall. He is almost rescued by Princess Leia (Carrie Fisher), who, in turn, is taken captive by Jabba and made the tastiest slave girl fourteen-year-old boys could possibly fantasize over, in a skimpy, ornate bikini that threatened to slip nipple continually on that luscious, milky, pale, naked flesh every time Jabba pulled roughly yet sensually on her hot bitch neck-chain and dog collar….

After Luke battles the aptly-named rancor (a triumph of stop-motion spectacle) and wins, no one in Jabba’s employ thinks to advise the cancerous blob that it would save on energy, resources, manpower, screentime and efx budget if someone would just laserblast all the Rebels and be done with it. Instead, they invent the James-Bond-Batman-Procrastination-Death: Jabba takes Our Heroes to the desert to cast them into the Pit of Sarlacc, all pomp and circumstance, a live band and cocktails, and a thousand opportunities to escape. Which they do.

rebels without a cause

Now Jabba was just a troublemaking, “worm-riddled scum” who meant nothing in the grand scheme of government, but the Empire was a totally different animal.

A long time ago, in a galaxy far, far away, a galactic empire fell, and we descendants of those worlds at war, only hear the WINNERS’ points of view. That is, the Rebels, the OUTLAWS. Like all history, it is skewed to make the winners look “right.”

Viewers never question what the rebels were actually fighting for. Well, “peace,” for one thing. But the galaxy was AT peace until the Rebels started fighting FOR it. The Empire are so powerful “star systems bowed down before them,” but what exactly does this mean? Unreasonable taxes? Not responding to disaster relief? (Except for blowing up Alderaan in EPISODE IV, the Empire never do anything particularly evil.)

Why must “empires” be synonymous with evil, like corporations have become today? There is really no difference between the Empire and the Alliance, except the costumes were shinier and the music was scarier.

In EPISODE I, slavery is condoned – in a political system long before the Empire came to prominence. Did the Alliance fight to stop slavery? No. By EPISODE VI, there are still no salient issues they are fighting “for.” I guess that’s why they’re called Rebels, for the mere act of “rebelling.” We are told they are the good guys unquestioningly, blindly. And you know what happens then – religion is invented.

No good ever comes from talking to an old man in the forest.

We recall the scene from Monty Python’s THE LIFE OF BRIAN, where rebels argue over what the Romans – The Empire – ever did for them: “Alright, apart from the sanitation, the medicine, education, wine, public order, irrigation, the roads, the freshwater system and public health – what have the Romans ever done for us?” Someone pipes up, “Brought peace.” And the speaker retorts, “Oh, ‘peace’! SHUTUP!”

Ben Kenobi (Alec Guinness) appears to Luke and rationalizes his lie about Vader “killing” Luke’s father by saying, “So what I told you was true… from a certain point of view.” With steam comin’ outa his ears, Luke retorts, “A ‘certain point of view’?”

The story of STAR WARS Compleat is “a certain point of view.”

The Alliance’s political ideology is as confused as they are: they do not fight for a Republic, because they pay fealty to a supposed princess – Leia, born of an ex-queen – both Imperial titles, not democratic.

And if the Empire runs a million business networks and trade routes galaxywide, in defeating them, the Alliance would only throw galactic business into disarray. But then, Luke and his pals are only dethroning figureheads. Like any corporate machine, it could run automatically until new figureheads are in place. But how would new figureheads run things? Probably the same way the OLD figureheads did. For efficiency’s sake. As any Earth businessperson knows, just changing the name plates on office doors is an undertaking that rivals steering a star-destroyer through an asteroid field; try changing office name-plates on a GALACTIC scale – the vendors alone would send you round the bend with their inefficiency.

Now I’m all for keeping order in the galaxy, through the use of reasonable taxes, the trade federation and the Microsoft Excel Spreadsheet – it’s the freakin’ REBELS throwing things out of whack with their spies and ersatz princesses and Wookiees wearing no pants.

No good ever comes from making love in front of an Ewok.

Climactic action is split into three parts – Han and Leia on the forest moon of Endor ally with Ewoks (were these things meant to be cute or annoying?) to nullify the Death Star’s deflector shield; Lando Calrissian (Billy Dee Williams) and a puppet lead a space battle against the Imperial star destroyers intent on keeping them from destroying the galaxy’s deadliest weapon, the Death Star, by plopping a tiny energy burst into a pipe no bigger than a womp rat; and on the Death Star itself, Darth Vader (now a good guy who only wants the best for his son) must stop Luke doing Burt Lancaster impressions in front of the Emperor, who is having just too much fun being fey.

In space, the dogfights continue like Spitfires against Messerschmitts. Watch for the uber-cliche of the frazzled pilot ejaculating, “There’s too many of them!” and immediately being blown up. If I was your wingman, that’s the absolute LAST thing I want to hear from a supposedly expert pilot. The same thing happens in INDEPENDENCE DAY, with the exact same words: some defeatist pilot exclaims, “There’s too many of them!” and is immediately vaporized.

Earlier on the Death Star, the Emperor orders Vader to go someplace and pick up Luke, to which Vader replies, “He will come to me,” to which the Emperor immediately backpedals, “I have foreseen it.”

Uh, then why did you tell me to go get him in the first place, you freak?

Just before Luke leaves for the Death Star (to fulfill – uh – what the Emperor has “foreseen,” ahem!), he tells Leia that he is her twin. She replies, “I’ve always known.”

Well then, why did you kiss me that way in EPISODE V, you skank?

Darth continually marveling to Luke, “Obi-Wan has taught you well,” when in fact, Yoda was Luke’s combat teacher, who taught him handstands and levitating X-Wings.

Ben just appears when I’m having my ass handed to me, except for now when I really need it.

At the end of the day, the Empire only lasted about thirty years, from EPISODE I to EPISODE VI. The Jedi would constantly pule about some “chosen one” bringing balance to the Force (meaning Darth Vader) while the Sith would sneer that the Dark Side was stronger (meaning Darth Vader). Both hokey religions were wrong. But no one seems to notice.

The biggest mind trick the Jedi ever played on us was making us believe George Lucas knew what he was doing. Oh, no doubt RETURN OF THE JEDI is exceptional stuff, with John Williams’s orchestral score once again simply magnificent, the effects the best that money could buy, by the most advanced effects studio of the day, Lucas’s own Industrial Light and Magic, the grand themes of redemption and friendship and unity, broad strokes amidst the matte paintings and explosions; yet Lucas’s story is full of gaping holes, ignorant non-science and silly rationalizations, which no amount of “authorized” websites (euphemism for apologist manifestos) or side-adventures can re-imagine into sensibility.

As just one example: Boba Fett; well-loved bounty hunter who was only cool because his helmet resembled DC Comics superhero, Dr. Fate; dies in the Pit of Sarlacc in the most embarrassing way. When Luke was swashbuckling his captors onboard Jabba the Hutt’s skiff, Fett, armed with a gun, thought it best to fly to within two feet of Luke before aiming it, at which point Luke lightsabered it in half and swept him into the Pit. Some kinda professional manhunter! He couldn’t aim from Jabba’s barge? Okay, compounding this character’s irrational motives and Lucas’s irrational screenwriting, the “official” Wookieepedia entry on Boba Fett claims “he left his armor” (my emphasis) in the Pit of Sarlacc and escaped with his life. Royt… anything for the sequelae ad infinitum.

I’d go through all the asinine plot holes and physics anomalies, but – as some gutless pilot once wailed, “There’s too many of them!”

In the remastered editions of this movie, Lucas does some immeasurably stupid things to his own creation: besides the unnecessary extra effects (that none of us were complaining about anyway), Lucas replaces the cringeworthy Teddy Bears Picnic song at the end with another Teddy Bears Picnic song that is just as cringeworthy. Piling cringes, Lucas then replaces the final ghost visage of Sebastian Shaw (Vader unmasked in the original version) with Hayden Christensen (Vader emasculated in the new trilogy). 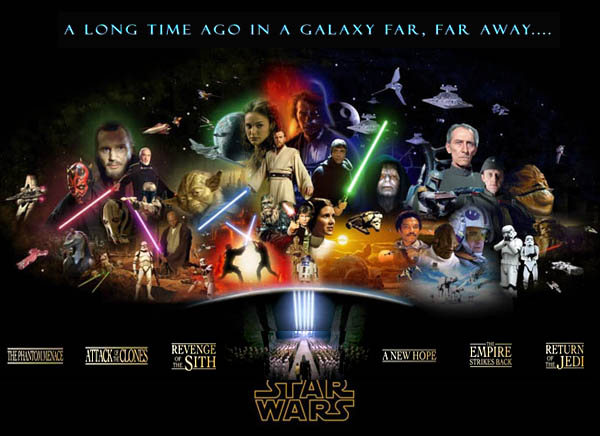 RETURN OF THE JEDI cleanly wraps George Lucas’s epic space soap opera. Now all we need is to see Darth Vader as a boy, an annoying Gungan, Yoda with a lightsaber, political screenwriting as exciting as chalk, and some really, really bad acting… no, wait! I was only kidding–the circle is now complete and all that–uh oh!, too late… We’ve circled around to – gulp! – EPISODE I… 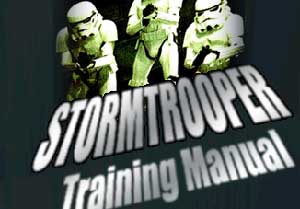 STORMTROOPER
TRAINING MANUAL
Excerpts from The Empire’s secret training syllabus.
Learn how Imperial Stormtroopers came to be the most feared fighting force in galactic history.
Compiled by Darth Slapstickus.