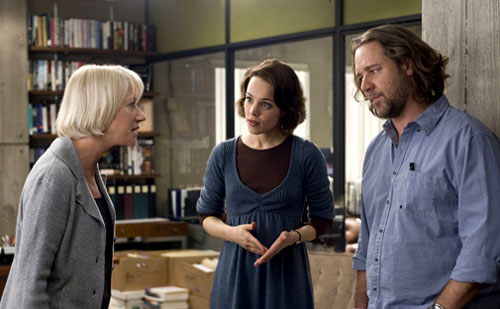 When the frame gets filled with old people – Look Out! Cutie Pie Alert!

ALL THE PRESIDENT’S MEN meets Blackwater.

Politics, conspiracy, murder – is the STATE OF PLAY. And Rachel McAdams looking tastier than Christmas dinner.

A murdered congressional aide is linked to Republican Congressman, Stephen Collins (Ben Affleck, playing it straighter than Tom Cruise’s public persona) in a sex scandal that leads to questions regarding his links to a no-bid, war-profiteering contractor, PointCorp (think: Blackwater, renamed Xe). A former roommate of Collins, investigative reporter, Cal McAffrey (Russell Crowe, playing it scruffier than Nick Nolte on a bad hair day), uncovers what looks like a conspiracy.For those uninterested in political intrigue, there’s spinner Rachel McAdams (whose only conspiracy is to commit hotness), as McAffrey’s naif reporter chum, Della Frye, wearing dresses that nicely accentuate her high, tight a-cups, looking cuter than a Hello Kitty backpack on a 16-year-old girl scout. 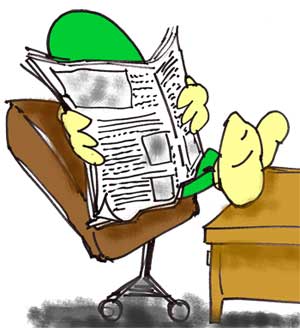 All the news that’s fit to Talking Points!

Writer Mathew Michael Carnahan (LIONS FOR LAMBS, 2007) once again displays his uncanny Beltway underbelly knowledge and knack for conjuring compelling stories from dry political duplicity. Kevin McDonald directs STATE OF PLAY (which could have easily become a talky mystery) like an action thriller.

Russell Crowe, looking faintly like Jesus, plays something almost non-existent in this 24-hour-news-cycle world – an investigative reporter. Taste the syllables in your empty mouths, news media; remember when this species was not extinct? No wonder he looks like a martyr.

Crowe’s acting chops simply beats the rest of the cast to death. Deep in The Method, he appears in his shoddy car, on the way to a crime scene, singing loudly to Irish beer-drinking songs, his back seat a scandal of wrappers and paper cups. He is paunchy, unshaven; his cubicle reminiscent of paper-age pack rats, his apartment the messiest in the world – yet his mind is like a shark’s tooth.

It is not surprising that democrat Affleck (the only man brave enough to satire progressive demagogue Keith Olbermann on SNL) is playing a Republican, and it is certainly not surprising to any Republicans that he is busted in a sex scandal; what is surprising is that his Republican congressman actually cares about The People, trying to uncover corporate corruption, rather than being molded by it, which would effectively make him a pariah at the All-White All-Male Racist Repub Country Club.

Helen Mirren plays the newspaper’s ribald editor, showing us what The Queen would sound like with the tongue of a construction worker. She only wants the dirt on congressional philandering, while McAffrey pleads more time to go deeper into the story. 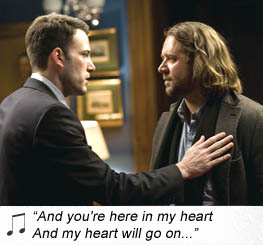 But maybe McCaffrey just wants to go deeper into something else, as we discover a past affair between him and the congressman’s wife, Anne (Robin Wright Penn). At one point, he tells Della he is following a lead and slinks off to have a drink with Anne.

Jason Bateman is PR man, Dominic Foy, a pimpster for richies, playing the same distracted, ad-libbing eccentric he has made a hilarious career of. Through him, we discover everyone is in collusion (again, like THAT would surprise anyone in politics!).

A PointCorp insider tells McCaffrey about corporate operating procedures: “They do whatever the fuck they want; they answer to no one. It’s a fundamental restructuring of our domestic intelligence policy – the privatization of homeland security, billions of dollars… wrath-of-God money.” Is he talking about Blackwater/Xe? Of course he is. The filmmakers don’t go too far to disguise PointCorp’s analogy to George W. Bush’s real world, no-bid murdering mercenaries; the logo even resembles Blackwater’s.

STATE OF PLAY never mentions what government is in power, because – as we have seen with the new spineless Obama administration – it doesn’t matter what government is in power for government misfeasance to continue. (Nine months into Obama’s reign, Bush’s shit still rains: still Iraq, still illegal surveillance, still Afghanistan, still Guantanamo, still no health reform, still no torture investigations, still no Bush, Rove, Cheney, Woo indictments for war crimes…)

STATE OF PLAY brings together many suspenseful story strands and clacks them into place neatly, but in the end, backs away from its high level of crime, bringing the story down to one man’s bad decisions which only made it look like corporate conspiracy. Collins, who seemed so sincere, was only looking out for his own interests – That’s Our Republican!

Also McCaffrey asserts something demonstrably incorrect: “Through all this gossip and speculation that permeates people’s lives, I still think they know the difference between real news and bullshit, and they’re glad that someone cares enough to get things on the record and print the truth.” No, they don’t know. Why else would Rush Limbaugh and Glenn Beck still be on air? How else did networks garner ratings by talking about Palin’s wardrobe for a week? How else did George W. Murderer crouch for two felonious terms in the Oval Egg?

Yet this movie’s construction and its performances are superb. The hardest aspect to swallow in STATE OF PLAY is that there are newspaper offices where investigative reporters still exist.