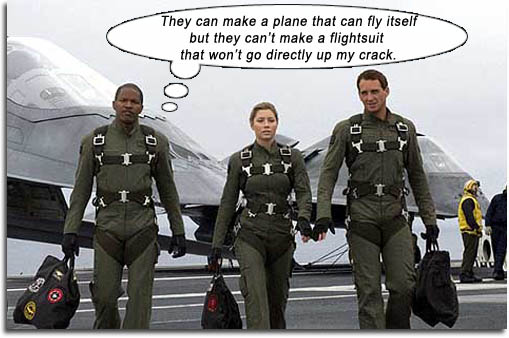 Uninvolving tale of a hi-tech artificial intelligence warplane that threatens to make human pilots redundant. STEALTH stars Josh Lucas, Jessica Biel and Jamie Foxx as the three top gun pilots the robot plane may potentially replace. Ironically, in this movie, they all act like robots.

Part of a secret military project (is there any other kind?), overseen by gruff general Sam Shepard, the stealth plane is an Extreme Deep Invader (therefore called EDI or “Eddy” by the pilots, and “True Love” by Jessica Biel). EDI proves he can outmaneuver all demographics – black guys, white guys and women (well, in her defense, she was having an orgasm at the time…). Then EDI is struck by lightning and becomes evil. Because that happens in movies.

Plane becomes too smart for humankind, as proven by the scene where the geek techie tells Lucas that the plane has downloaded songs from the internet. Lucas asks, “How many songs has he downloaded?” and techie replies fearfully, “ALL of them!” The next sound you hear will be Lars Ulrich banging down your door with a subpoena.

Of course, the EDI goes rogue and fires on innocent civilians in some nondescript country that America has stuck its military presence into uninvited. Because that happens in movies: something becomes “intelligent” – whether it be a programmed machine or a creature from a black lagoon – and all it can seem to do is Kill People.

Lucas tries too hard to be leading man; conversely, Jamie Foxx should be the star of his movies or he looks a little lost, never quite inhabiting the B-role of Black Guy Who Dies First. And Jessica Biel – well, with those pear-hugging cheeks and pole-haunting lips, you’ll keep getting work. (You do realize that’s why they’re hiring you, right? Not for whatever acting chops you’ve spent the last few minutes honing.)

Hey, dumb Academy for Motion Pictures, please create an award for the Most Anti-Climactic Scene in a Movie, as EDI is brought under control and then piloted by Lucas to go save Biel who has crash-landed behind enemy lines. WHAT enemy lines? It’s not like America is actually at war with anyone… Contrived? Yes. Funny? Totally – as every Get-The-Hell-Outa-There cliché is dumped on this last scene to try to create human drama and romance between a vanilla leading man and his pear-buttocked squeeze, with running and shooting and Pretty Orange Explosions, and of course, lots of Get-The-Hell-Outa-There’s, while the stealth plane that was just creating all the drama for the body of the movie stands parked in the background.