Will Ferrell as Adam Sandler and John C. Reilly as a funny Will Ferrell. 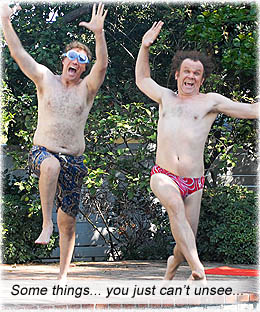 Both 40 going on 14. Both thrown together as step brothers when their single parents (Richard Jenkins and Mary Steenburgen) marry; set in their ways, yet forced to share the same house, they must somehow find a way to co-exist – or this mixture of funny, half-funny and deadpan stupid gags would all go to waste.

Splash review on the DVD box for STEP BROTHERS, from Kyle Smith, New York Post: “The funniest film I’ve seen this year.” You don’t get out much, do you, Kyle?

Movie opens with a quote onscreen: “Families is where our nation finds hope; where wings take dream.” The credit reads: “an actual quote from George W. Bush.” Rather than pushing any political stance, I think this movie is trying to tell us it’s going to be about a couple of mongoons.

One of the main gags is, of course, that both Ferrell and Reilly are probably no more than ten years younger than their parents. Once we’re over that one, there’s hardly anywhere left to go, yet the movie keeps trying: thrill to the drama of the parents giving the spoiled step brothers an ultimatum of finding a job or moving out; cringe at the brothers’ attempts at making an informercial while destroying their father’s yacht; vomit at the eventual success of the brothers as an unlikely musical duo, saving the day at a business symposium (where Horatio Sanz solicits one titter from us as an 80’s Billy Joel Tribute Band – “We only play his hits from the ’80s”)…

There are a few good lines, all said by someone other than Will Ferrell, but if you enjoy this movie without being whiskied up enough to put a mule-deer into a coma, you’re probably related to him.