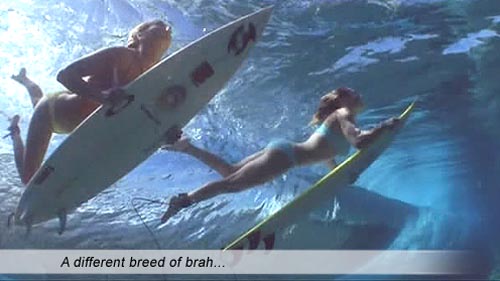 Surfing is not a matter of life and death… It’s more important than that.
— surfer’s credo.

STEP INTO LIQUID is one helluva surfing documentary – and we never once hear the words “dude” or “brah”!

And writer-director Dana Brown‘s tribute to board-dom is not just an esoteric in-gag for surfers. It embraces every one of us citizens of the shore alike and flings us headlong into the passion; we taste the brine, we feel the sun-blasted surf on our backs, we inhale the heady, luxurious salted air, the ineffable laze of warm sand and hot breeze; we feel the pound of the breakers, the spank of the surfboard, the step into liquid.

Brown is son to surfing guru Bruce Brown (ENDLESS SUMMER, 1966), so it’s no accident this doc is as compelling as it is.

Not just 87 minutes of bronzed bros throwing down on tuff tubes, STEP INTO LIQUID moves us physically and emotionally from locale to locale, from individual to individual, from wild team to wilder team, never flagging, and capturing the most thrilling surfing sequences on film today.

From Maui to Western Australia, from Rapa Nui to Ireland; from traditional surfers to the crippled surfer who still hits the waves with his buds’ aid, to the women surfers, to the Michael Jordan of surfing, Kelly Slater and his wild man successor; from the guys who follow supertankers for the fifteen minutes wake swells to the madmen who take on Cortez one hundred miles out to sea, where a mountain beneath the water creates literal mountains of water to ride.

Accompanied by driving soundtrack, Dana Brown narrates, outlining pioneers, innovators and just plain crazies: the hydrofoil board that rises two feet above the water on its winged keel, the four-man teams who thrive on the competition to extend their expertise, the old redneck who started surfing in leap year February 1976 and aims to surf every single day (“rain, shine or tonsilitis”) until leap year Feb 2004 (over 9,100 consecutive days at time of filming).

Brown: “Surfers often can’t escape the stereotype of being a beach bum. Their entire lives they have to explain themselves.” And Chris Carter, creator of THE X-FILES concurs: “When you talk about surfing, the more you say, the worse off you are. It’s something very personal and ends up sounding a little silly.”

Just one example is old Dale (Mr. 9,100 days): “Surfing is the ultimate spontaneous involvement in a natural medium.” I guess walking around breathing oxygen doesn’t count. Later he tells us of the intellectual problems he faced while working at a refried chicken joint: “All the knobs confused me.” Of course that’s not counting himself as the biggest knob.

Or the wave riders at Rapa Nui proclaiming the island was not despoiled by civilization. Of course, not counting the despoiling their camera crews and white ways are doing right now.

With John-Paul Beeghly’s sweeping, exhilarating slomo cinematography, we are made privy to what I presume is just a taste of the sensation that surfers chase like an addictive drug. So though the extent of my interaction with the sea is tripping over in shin-deep water and losing my rubber ducky, it’s easy to see how real surfers would drink deeply of STEP INTO LIQUID.