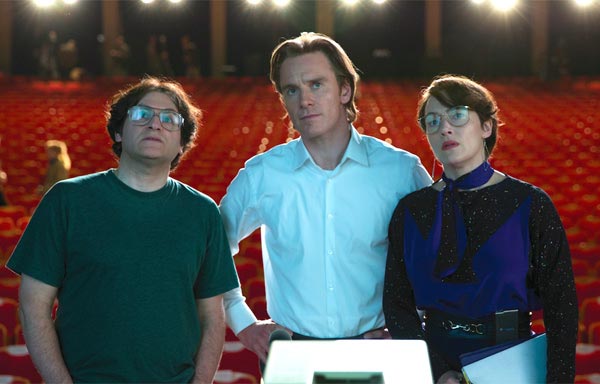 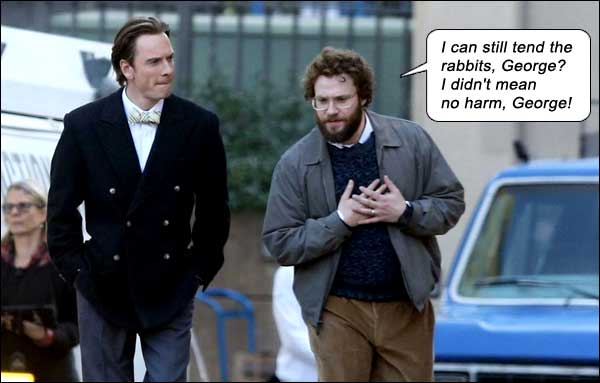 Nerd against Geek in a battle to the Steve.

STEVE JOBS is a savage attack dog of a movie. Like Steve Jobs.

Each scene slams into us like shrapnel: overlapping intelligent dialogue, fever pitch arguments, soul-breaking philosophies, walk-and-talk business decisions, with flashbacks as savage as the writing, smash-cut into the smallest interstices, rather than drawn-out exposition. After viewing STEVE JOBS, you will log into your personal media device that Steve Jobs invented, and blog that you are exhausted.

Unlike most biopics about Steve Jobs, which focus on his ruthlessness as co-founder and CEO of Apple Computers and never explore why, the movie STEVE JOBS teases out a throughline of a man battling to understand familial bonds. Maybe too neatly, because from all accounts, Jobs was driven by more than just one demon.

Michael Fassbender (X-MEN: DAYS OF FUTURE PAST) is the man, the monolith, Steve Jobs, looking nothing like Jobs himself, but imbuing his role with a metallic resolve and ice-blooded momentum that the real Jobs wielded like a battleaxe. The first scene opens in crisis mode, at the 1984 Apple Macintosh launch, as a rail-thin Jobs, obsessed that his new computer should say “hello” to the audience, admonishes his tech Andy Hertzfeld (Michael Stuhlbarg, TRUMBO) to make it so, moments before showtime. Though this command could not be achieved after weeks of development, Jobs’ ego would not relent, “I don’t have time to be polite, or for realities!” (The irony that this obnoxious personality is striving to make a machine sound personable!) We are immediately ensconced in the aura of this man – whether he be right, wrong or out of control. We don’t have time to breathe as –

— we are thrust into the next scene, where Jobs confronts his ex-girlfriend Chrisann Brennan (Katherine Waterston) asking for financial help, their “daughter” Lisa in tow as ammunition. And as arc of redemption for Jobs, who would start out vehemently denying his paternity to Lisa. Her first interaction with him is as damaged and cruel as you can imagine, when she proudly proclaims, “My daddy named a computer after me,” to which Jobs replies harshly, firstly that he’s not her daddy, and that his LISA computer stands for “Local Integrated Software Architecture” (which, we would discover later, means absolutely nothing).

Ten minutes in – and we are about to tear the cotton from our seat arms in an emotional hurricane. Each act is shot in real time, so showtime still looms, as his marketing executive Joanna Hoffman (Kate Winslet) keeps reminding him, even as Jobs is again interrupted by —

— Steve Wozniak (Seth Rogen), the Tech Behind The Man in their formative years, Jobs’ own Tenzing Norgay, the Sherpa creating reality from Jobs’ ascent into fevered fantasies. Pathos oozing from every pore, “Woz” comes hat in hand, asking simply that Jobs acknowledge Woz and the tech team that raised Jobs to where he was today, which Jobs vetoes. Woz would subjugate himself to Jobs for the better part of their careers, until he can take the derision no more, later telling Jobs:

You can’t write code, you’re not an engineer, you’re not a designer, you can’t put a hammer to a nail. I built the circuit board. The graphical interface was stolen from Xerox Parc… So how come ten times in a day, I read Steve Jobs is a genius? What do you DO?
— Seth Rogen as Steve Wozniak, STEVE JOBS.

The last character introduced in this bullet-train first act is Jeff Daniels as entrepreneur and CEO, John Sculley. Literally seconds before Jobs must walk onstage, Sculley shares a rare wine with him and exposits on Jobs being adopted; we also sense Sculley fulfills the role of surrogate father to Jobs. Or a sinister Svengali.

Stitched together with montages, the three acts are built around three launches of revolutionary computer products, career defining moments, camera tailing Jobs relentlessly before each launch as he damage-controls his staff, his product, his ex-colleagues, his assistant and his informal family.

Act II, 1988. NeXT computer launch. Again, moments before showtime, crisis mode; more revelations, as Sculley visits Jobs in a hail of shouted explanations that leave us unsure of everything we thought we knew about the ousting of Steve Jobs at Apple. One revelation for me in this movie is that Jobs wanted to make his computers “closed systems” while Woz, Sculley and most of his techs advised for compatibility with other computers. In a flashback boardroom decision that is too cinematic for its own popcorn, Jobs is victim to a show of hands while it buckets rain outside the giant corporate windows.

Act III, 1998. iMac launch. It didn’t really matter whether we were paying attention to all the tech jargon, the political wrangling or the triumphs and trials of Jobs trying to stage his marvels, this story resolves here with Lisa Brennan-Jobs, now 19 (Perla Haney-Jardine; she was Bill’s daughter B.B. in KILL BILL VOL.2). This man, so intent on fixing things for maximum efficiency, would admit to Lisa, “I am poorly made.” Arc resolved.

The three people responsible for what you’re doing RIGHT NOW.

Nerd Against Geek: It might seem Wozniak’s constant upbraiding might have led to Jobs’ redemption, “It’s not binary – you can be decent and gifted at the same time.” But woz it? (Dja see what I did there?) The indispensable Hoffman got to the point where she threatened to quit as his P.A. if he didn’t “fix this now” with his daughter. So all roads – including Sculley’s musings about Jobs being adopted – lead to this moment. Movie seems to indicate Jobs just needed that reconnection with his estranged daughter to become Saint Steve. So though it takes his abrasiveness to heights unseen in previous Jobs bios, it palliates that unsavoriness with this one event. But we must look past the movie manipulation and ask: Did Jobs actually keep his daughter’s first Mac “painting” and show it to her at a crucial emotional moment when she was 19? Artistic license is a sonuvabitch.

From a book by Walter Isaacson, Aaron Sorkin (THE NEWSROOM) pens a script as ferocious as Danny Boyle‘s direction. Remember back in 1995, when studios were trying to make computers interesting in THE NET, by involving chasing and murder and Sandra Bullock in a bikini? Here’s how it’s really done! This dialogue-heavy movie trucks along as dynamically as Boyle’s TRAINSPOTTING or SLUMDOG MILLIONAIRE, with no murders or bikinis… (A very cool black and white clip of Arthur C. Clarke opens the movie, as he talks of computers being the future, although this prelude is sleight of hand to distract from the movie’s real aim.)

German-Irish Fassbender melts metal with that American accent and steely resolve, biting into every line like a razorwire indictment. Winslet’s portrayal of Jobs’ frumpy personal assistant is probably too hot for prime time (at many points, their heads get close enough to simply lean in and let it happen; at one point, we sense a missed opportunity as she refers to herself as his “work wife” while preening his hair). Master comedian/ director/ writer Seth Rogen sensibly plays it dead straight, and comes out the better actor for it. And Jeff Daniels is fast becoming one of the greatest underplaying actors of his generation. (How did he EVER manage that after DUMB AND DUMBER?)

I don’t know Steve Jobs personally (probably the case for most of the world), so media like this is gradually “finding the statue within the stone” for us. Whether it is right, wrong or out of control, all these speculations and fictions gradually concretize as “fact.” Ironic that Steve Jobs himself is becoming “Local Integrated Software Architecture”…