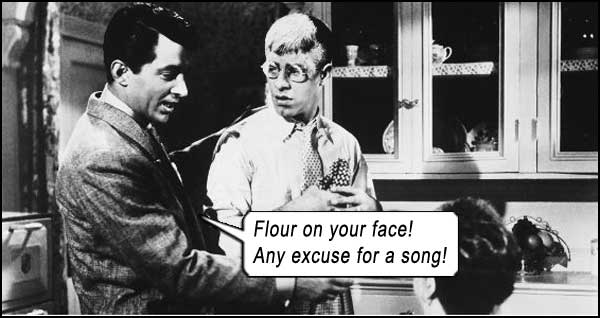 Well, Dean played Dean, and I played Jerry; we were two different characters, but it was us all the time, including the almost-breakup scene, which was tough for us to do.
— Jerry Lewis, INSIDE THE ACTORS’ STUDIO, 1999.

THE STOOGE is the Martin and Lewis roman à clef of their rise to glory.

Bill’s agent Leo (Eddie Mayehoff from THAT’S MY BOY) advises him to plant an unknown guy in the audience to spice up Bill’s act with interplay. Ted Rogers (Jerry Lewis) is that stooge, whose impromptu antics make the act a roaring success. Bill refuses to give Ted any billing, maintaining that Ted’s anonymity is what makes the act so successful. He could be right… but when he starts treating Ted like his personal slave, we realize Bill’s runaway ego is to blame for Ted’s omission. 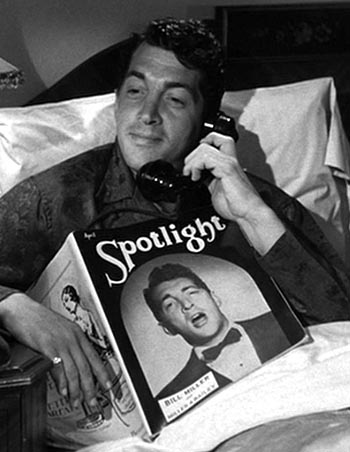 Going to bed with myself…

(One wonders why Bill wasn’t forced to just reunite with his former partner, but I guess it’s ‘Martin and Lewis,’ not ‘Dean and Dogface’…)

THE STOOGE is probably the hardest Martin and Lewis movie to watch, because it cuts so close to the bone. In fact, the release date was pushed back until a few more Martin and Lewis films had hit theaters. Filmed in February 1951, THE STOOGE was only seen after THAT’S MY BOY (May 1951), SAILOR BEWARE (Feb 1952) and JUMPING JACKS (June 1952), because the studio felt its tragicomic fiction was too depressing, and Martin’s meanness to Lewis was too jarring.

In real life, Jerry’s self-admitted love for Dean was well-documented, yet it seemed Dean could take or leave Jerry. By the time of their breakup, one of the reasons given was that Dean felt Jerry was holding him back from a dramatic film career; another reason, that Dean felt his roles were becoming ever more shallow while Jerry became the focal point of the team. All of it was only part of a complexity we would never untangle. These issues are alluded to in THE STOOGE, where the dynamic is slightly different to real life: here, Bill (Dean) is the performer and Ted (Jerry) is ad-libbing his bits. In reality, Jerry was the writer of all the Martin and Lewis gags, Dean’s role simply suave straight-guy. That’s the way Jerry wanted it; his business model of “sex and slapstick” was a winning combination. Dean was content to sunbathe all day, or drink or womanize, while Jerry wrote. Still, there must have been some kind of work ethic, as their lightning-fast delivery attests. Although, that could be due to – in Jerry’s words – Dean’s “innate sense of comic timing.” 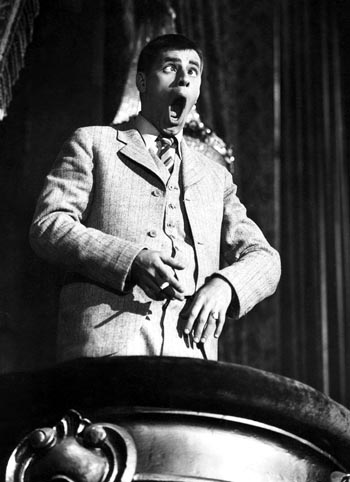 There are songs aplenty in THE STOOGE, some unbearable romantic treacle (like Dean’s opening croon to Bergen) and some quite catchy (Who’s Your Little Whoo-zis?, A Girl Named Mary and a Boy Named Bill); and Dean even sings Jerry to sleep on the train (–any excuse!).

As well as Polly Bergen again (AT WAR WITH THE ARMY, THAT’S MY BOY), there’s Marion Marshall again (from THAT’S MY BOY), as “Frecklehead,” Ted’s love interest. Note how the filmmakers (director Norman Taurog and writer Fred Finklehoffe) infantilize Frecklehead to make her compatible with Ted’s arrested development character.

This was “entertainment” once: a guy in a straw hat and suit, soft-shoeing it and crooning with an accordion, his “backing band” a small orchestra, and telling jokes like “I took my mother-in-law to the beach, and the only thing that got sunburned was her tongue.” Rim-shot. (Back when George Carlin was in tiny counterculture boy-pants.)

One day, Bill is rolling drunk and cannot do the show. Ted steps in for him, solo, and kills. Ted is complimented that HE is the act and Bill is the hanger-on, yet Ted acts as apologist for Bill, reveres him, builds him up. As always, so close to the bone. It’s a testament to Dean’s fine acting that he can play such a downright horrible guy, under the veneer of the suave sex symbol.

By the time Bill fires Ted for stealing his thunder, everyone can see through Bill’s mean streak – Mary his wife, Leo the agent, theater owners, Frecklehead, the crowd, even Dogface Dolan – and only when Bill bombs miserably as a solo does he repent. And it is heart-wrenching. Because – close to bone. And Bill gives a speech to the crowd that no one would ever give in real life, but it is tear-welling nonetheless, because – bone.

“…But I’m only half an act – the fella that made the act work was a little guy by the name of Ted Rogers. I can sing a song and play an accordion, but I need that spark, that “something,” the chemistry that makes two men a successful team…”

Of course, the greatest conceit of the movie is that it would have us believe a random guy pulled from obscurity can be such an improv firecracker. Ted is not an actor-waiting-tables, nor does he dabble in any of the performing arts. Ted is the clumsy errand boy of the agency, foisted onto Bill to get him out of the office where he keeps breaking things. How does he adapt so quickly to the spotlight? It’s hard enough for a civilian to be comfortable in front of an audience, let alone ad-lib… Movie tells us it’s as easy as breaking things. 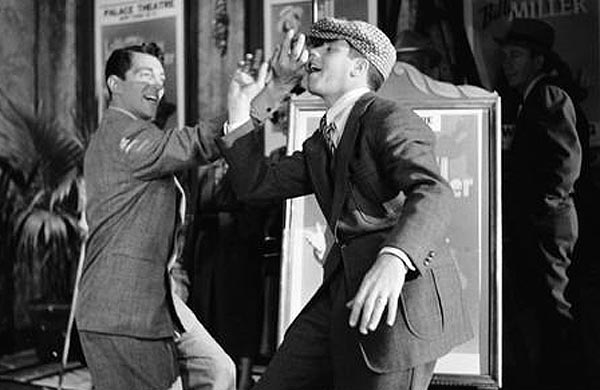 Both Dean and Jerry were 5’10” yet to further their image of the handsome man and the monkey, Jerry put lifts in Dean’s shoes and shaved his own down, always working in a crouch around Dean.

The final look and feel of the act that Bill and Ted end up performing is a simulacrum of Dean and Jerry’s real life shock-and-awe music-and-comedy club appearances, where audiences didn’t know what was going to happen next.

The very last shot of Dean and Jerry breaking the fourth wall and giving the A-OK sign to each other and we the audience, is touching. It needed this last shot to bring us up from the depths of direness the film had dragged us to.

In real life, ten years to the day that their impromptu act exploded onto the stage at the 500 Club in Atlantic City in July 1946, Dean Martin and Jerry Lewis would part ways. Though this film seemed to soothsay their eventual breakup, they were actually on the rise. THE STOOGE would be the last in the “nightclub” era of Martin and Lewis films (where – not counting THAT’S MY BOY – they were always essentially playing entertainers). Now (starting with SCARED STIFF) would start a run of classic Martin and Lewis character-driven comedies that would catapult them into the realm of legend…

imdb
Word Count: 1,200      No. 1,339
2:24 – Look at that fall over the balcony railing. That’s no stuntman. That’s all Jerry. Though it’s meant to look accidental, watch carefully how he sets up his gripping arm, how he knocks off the cap, and smoothly goes over without any damage to his person. A true master of his craft, an artisan!

There is such a thing as “joke-craft” where standup comedians carefully move around the language of their joke to make it most impactful and funny. Watch enough Jerry Lewis slapstick and you’ll realize that he crafted these gags as meticulously as Chaplin or Keaton or the Marx Brothers.