Nothing Stops the Loss.

I didn’t say it. Ryan Phillippe did. In its stunning 37th minute, STOP-LOSS gets raw as Staff Sergeant Brandon King (Phillippe) protests being “stop-lossed” – involuntarily deployed again after his voluntary service to the U.S. military has ended. 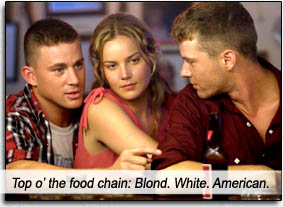 The Stop-Loss program is exactly what it sounds like: a fine print clause in military contracts to stop the loss of American troops from active service – by forcing them back onto the death fields at the behest of the Murderer in Chief. No courts dare oppose this presidential order, so soldiers hoping to contest “stop-loss” are dead in the water. Or dead on land. Doesn’t matter – as long as you’re dead by the time they’re finished with you.

Director Kimberley Pierce does the first ten minutes of STOP-LOSS like an MTV video; almost feels like a flag-waving call to arms, colorful soldiers on colorful battlefields, everything blowing up sexy, edited like a Maroon 5 video. Then Brandon and his unit (Chippendale dancer, Channing Tatum and Heath Ledger doppelganger, Joseph Gordon-Levitt) return home to a redneck Texas reception as heroes, and a Senator (Josef Sommer) making empty promises to pull strings for Brandon should he ever “need anything.” When Brandon actually seeks the Senator’s help, the Senator does nothing but remind us what an unprincipled, unethical, mindless talking head pol he is.

In flashback, we see Brandon’s unit in Iraq checking cars for – what? Apparently, strategists and generals and the president-moron-cowboy himself believe that checking traffic and terrorizing civilians somehow curbs terrorism in the fake War on Terror in the Middle East.

I constantly shout at the screen, What are you DOING? Why are these troops at checkpoints? Are terrorists gonna have a BADGE or something, stating their intent? Get OUT of that country, you maroon-necks!

When a group of “terrorists” do a drive-by on Brandon’s unit, Standard Operating Procedure is to follow the hot car and take it out. So Brandon’s unit tails the car to a civilian abode, beat down the door, terrorizing the bewildered people in their kitchens and living rooms with full armor, guns drawn, full shout, itchy triggers… no one here… oops! wrong house… leave without any apologies, recompense, or remorse. Now imagine…

…Imagine there were Iraqi military checkpoints every few miles in these United States, your car strip-checked, you and your passengers/ wife/ children submitted to humiliating body-searches; imagine the travel time to your job, school, the store, a dinner date or business meeting; imagine an Iraqi battalion beating down your door on a lazy Sunday afternoon (because they believe they have a right to) and searching your house for weapons you don’t have and terrorists you are not harboring, with their weapons drawn, no permission, no apologies, no reasoning; imagine them shooting one of your family callously and leaving with no repercussions. They say they’re searching for American terrorists – but the “American terrorists” are only terrorizing the Iraqi occupation forces because the Iraqis are in their country beating down American doors.

How many houses would Iraqis have to destroy and how many American twelve-year-olds would they have to grope before you yourself loaded up a car with ammo and did a drive-by at an Iraqi checkpoint? Answer: not fucking many. Will George W. Bush ever get it?

Back home, after telling his commanding officer (Timothy Olyphant) what should be done to the president (see above), Brandon steals a jeep, goes AWOL, and spends the movie wondering how to stay out of a) military service, b) jail, c) Mexico. Fake choice, as all three will get him killed or give him mad diarrhea.

Though he enlisted for patriotic reasons (“I signed up thinkin’ I was gonna go over there, protect my country, my family; payback for 9/11 – but you get there, you realize it wasn’t even about any of that!”), his reason for leaving is just as patriotic – he wants to live in the free America he fought to defend. But he finds “this war is never gonna be behind me” and ends up headed for Iraq again with his unit, all misdemeanors forgiven, as long as the military is able to put him back on track to an early grave.

Phillipe’s performance in FLAGS OF OUR FATHERS was good – here, it is exceptional; true grit as a man and actor, and a Bible Belt accent that would get him into a knife fight in any tittie bar in the slave states. In perfunctory, gore-filled flashbacks, we see he is battling the demons of accidentally shooting a child. Even so, he is the most psychologically stable of his unit.

Now… I have a theory:

This society blames PTSD for any sign of maladjustment in returning soldiers. But anyone who signs up for war is already maladjusted to begin with! “Returning from war” gives them license to act like the maladjusted pricks they already are, via the magical excuse of PTSD.

Not everyone returns from war maladjusted. That’s our clue that PTSD is not always the reason why Bubba is bonkers. It is used like alcoholism: a fake “disease” that serves as catch-all EXCUSE. The tragedy is, the soldiers who are well-adjusted – who see they’ve made a mistake about the “honor” of the military and want out – are ostracized, destroyed, disciplined for their GOOD SENSE in realizing it is a fool’s vocation.

Tatum has “Death Before Dishonor” tattooed across his back. Is it because I’m not an indoctrinated army grunt that I just can’t figure exactly where that honor thingy kicks in? Is it when he’s sleeping naked with his loaded gun in a ditch he just dug while blind drunk, after smashing his home and beating his wife? Explain the honor part?… I’ll wait.

And exactly how is the American Military honorable in criminalizing leaving the service after your duty is done? Where is the honor in the government itself not honoring its military contract? The stop-loss program can only be enacted in times of war and since the president himself declared the war over (even though it was never legally declared a war in the first place – double whammy!) the military should not be able to stop-loss anyone. This never stopped the gutless cur 43rd president (who ran from his own duty to the country) and the chickenheart vice president (who deferred from service five times) re-sending other men’s children off to die for them.

I’m still waiting for that explanation of honor…

A Mexican soldier makes gravy from his prospective bloodbath: “I might go back because if I got killed, my family would get green cards.” Ridiculous rationalizations spawned from desperation and hopelessness.

Brandon furtively makes contact with an underground group of AWOL stop-lossed ex-military, but their existence is too shadowy and insubstantial for him. At first, his decision to return to his unit felt like a cop-out, but we realize the poor guy had nowhere to run. The military would squeeze him until he died one way or another.

At a funeral for a suicide friend, Tatum presents a flag to the grieving widow, voice breaking, holding back tears, hollow words of sympathy from an uncaring government, “This flag is presented on behalf of a grateful nation and the United States army as a token of appreciation for your loved one’s honorable and faithful service.”

“My loved one dies in this unnecessary war prosecuted on the basis of a lie and all I get is this crummy flag?!”