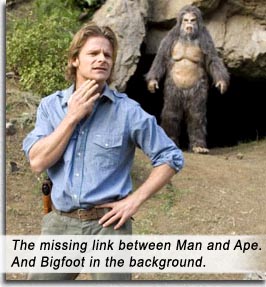 In an effort to staunch failing ratings after inheriting his dad’s wildlife TV show called Strange Wilderness, Peter Gaulke (Steve Zahn) goes in search of Bigfoot with a group of losers (including beige Allen Covert, stoner Justin Long, wacko Jonah Hill, alcoholic Kevin Heffernan, and blonde Ashley Scott as the chick whom we’re meant to think gets her knockers out but it’s just a body double).

Adam Sandler produces, which is the only reason this movie got funded. One wonders if even Will Ferrell would find these flat attempts at jokes funny. WILDERNESS tries desperately to be willfully absurd like BALLS OF FURY or ZOOLANDER, but lands closer to the mincemeat of YOUR HIGHNESS or the hash of ENVY. Does Ernest Borgnine really want STRANGE WILDERNESS to be one of his last legacies? What is he doing? And it’s usually women who have to show their genitals to get movie roles, but here, Robert Patrick is a veteran jungle tracker who drops trou to show us his war-wounded shaft. Like this movie, it’s been terminated.