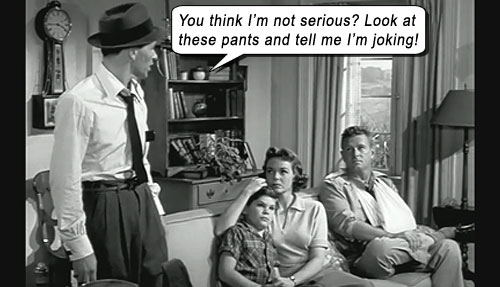 An assassination attempt on the president of the United States – by Ol’ Blue Eyes!

In a bucolic American town named SUDDENLY, three men posing as FBI take a residential family hostage, using the family’s house as a vantage point to assassinate the president.

Frank Sinatra (FROM HERE TO ETERNITY, 1953) is John Baron, the crazy-eyed leader of the three assassins, so rail-thin, his pants are not only too high, they hang about him like pantaloons; his tie is too short and his hat is so rakishly tilted, it gravitationally affected Mercury’s orbit for two months.

Ellen’s house is overrun by the assassins, as it overlooks the station where the president will disembark. Her loudmouth son “Pidge” and old paw live with her.

This black-and-whiter is a case study in dated moviemaking versus timely message. Made in 1954, the production values, special effects and social mores are all so quaint it makes us vomit in our mouths (theatrical acting, gunshot wounds nonexistent, asking her out to church!), yet the themes and arguments are as impactful today as they were half a century ago.

Though there are small pockets of badly directed action (by Lewis Allen), SUDDENLY is a dialogue-driven movie (written by Richard Sale) with a throbbing social conscience. Strangely, it embraces a nuance that is altogether extinct today: it is actually anti-war and pro-gun!

So though we notice all the glaring annoyances at first (like the terribly looped voices, all the law enforcement with big-balled basso throats, melodramatic acting and pointy bras), by paying attention to the dialogue, we peel away another layer to this seemingly simplistic thriller.

The story itself is predictable – after all, in an American movie no one ever kills the American president (unless it’s Lincoln). Likewise, even though assassin Baron keeps threatening that all-American kid, we know not one hair is going to be harmed on his purty li’l head – but within this predictable story, the arguments presented over war, guns, violence and heroism are surprising. Ellen’s husband died in “the war” so she is pathologically averse to Pidge following his example; she hates Pidge playing with guns. Meanwhile, her paw tries to school her about “dyin’ for your country” and her sheriff beau (Hayden) buys a toy gun for Pidge and tells her, “Guns aren’t necessarily bad – it depends on who uses ’em.”

Baron is an ex-military man, more than once boasting, “I killed 27 people – got a silver star for it” – in other words, though killing people in civilian life might be called murder, killing people in war is called heroism. Baron is constantly rationalizing that killing isn’t bad if done for the right reasons. The fact he is targeting the president is irrelevant. Baron’s character is disconnected from political ideology, to keep his motivations pure mercenary: “Don’t give me that political jazz – it’s not my racket!” So sayeth Ol’ Blue Eyes. SUDDENLY is a treatise on guns and war as instruments of morality. Though released during the Eisenhower administration, movie never mentions who the president is, because presidential policy is not the point of the tale. (Baron even spits an allusion to what would become one of The Who’s signature lines, “Tonight at five o’clock I kill the President. One second after five there’s a new President. What changes? Nothing!” In other words, “Meet the new boss / Same as the old boss!” – The Who, Won’t Get Fooled Again.)

Baron boasts about “control of life and death,” how having a gun “made you kinda God; without the gun I’m nothing, and I never had anything before I got one. First time I got one in my hands and killed a man, I got some self-respect… If I didn’t have a gun, you wouldn’t even spit on me, but because of the gun, you’ll remember me as long as you live!” He’s got a point. Mass murderers (whether they be postal workers, school shooters, army grunts or generals) always get the best press.

The koo-koo message is: war is BAD because it legitimizes murder and sends back some citizens with the humanity trained outa them, but guns are GOOD, because – as Wayne LaPierre would crow in ignorance decades later – the only thing that stops a bad guy with a gun is a good guy with a gun.

Unlike today’s vernacular where military service is tantamount to godhood, SUDDENLY gives equal weight to both sides of the argument, simply posing the questions and letting its audience decide: is Ellen’s husband a hero or a chump for “dying for his country”? Is Sheriff a hero just for being in the war? Is Baron a chump for “killing more jerries than any five officers put together”? Sheriff came back to be a sheriff; Baron came back to be a hired killer and Chairman of the Board.

For a ruthless, emotionless killer, Baron sure talks a lot about his emotions. Sheriff even says to Ellen, “We gotta keep this guy talkin’, cos that’s his weakness.” (Baron was a James Bond Villain even before there was such a thing…) Coincidentally, one of his thugs is cartoon voiceover extraordinaire, Paul Frees.

Many dumb plot points hold the film back from becoming a masterpiece, or even a compelling piece of cinema:

Before this movie’s release, three sitting United States presidents had been assassinated by gunmen: Abraham Lincoln (1865), James A. Garfield (1881), and William McKinley (1901). Nine years after this movie, in November 1963, John F. Kennedy would be assassinated by CIA gunmen.

Influenced by this movie? Or just koo-koo coincidence?…

All of a Sudden, Stupidly.
What a stupid, stupid fictional name for a town! Just to be able to crack the joke, “What’s the name of this town?” “Suddenly.” “Suddenly what?” “No, no, that’s the name!” Oh, such fun! May I lol? 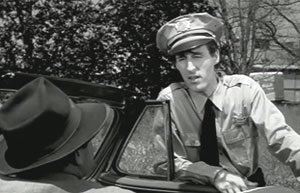 Cop with a basso voice so deep his balls must have their own zip code, tells a motorist, “Hangover from the old days. That’s the way things happened here – suddenly: road agents, gunfighters, gamblers.” He adds, “Things happen so slow now, the town council is figuring to change the name to Gradually.” Ha ha. That’s rich! Worth waiting for that punchline almost as much as waiting for my boil to pop.

In the film’s final frames, they suddenly circle back to that joke when a passing motorist asks Sheriff the name of the town. “Suddenly.” “Suddenly what?”

Y’know, it wasn’t that funny the first time…