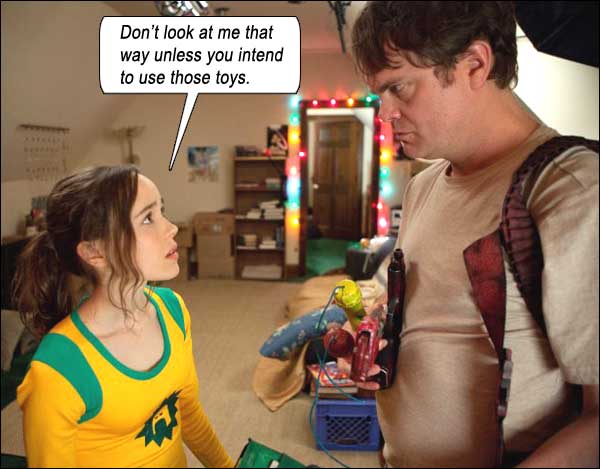 Didn’t somebody already make SUPER and call it KICK-ASS?

In SUPER, Rainn Wilson (THE ROCKER) is the putty-muscled nerd who has had enough of bad guys, adorning himself in flamboyant, ill-fitting costume and pipe-wrench, to become the scourge of small-time hoods with his catch-cry, “Shut up, crime!”

Like his counterpart in KICK-ASS, Frank D’Arbo (Wilson) also wonders why no one else has taken it upon themselves to fight back. (Uh, maybe because the type of crime that warrants fighting back against is the exact type that will kill you faster than a speeding bullet – this includes anyone carrying a gun up to the corporate swine responsible for the disparity in wealth disbursement in society.) But the paradoxical concept of the costumed vigilante “super” hero has embedded itself so deeply into modern culture that director-writer James Gunn can get away with yet another epigone with little explanation or apology.

Frank is a virtually friendless fast food cook, who leads such a drudgerous life that he has immortalized its best two moments in two small cartoons framed on his wall: his unlikely marriage to Sarah (Liv Tyler), and the moment he helped foil a robbery. When Sarah falls prey to the drugging and thugging life and is stolen away by twitchy, ostentatious sociopath Jacques (Kevin Bacon, bringing the same charismatic cheese he just fried in X-MEN FIRST CLASS), Frank can take it lying down no longer and hits the streets as Crimson Bolt (mainly to win back Sarah, and fighting any crime that gets in his way). Comics geek Libby (Ellen Page) blithely follows him into the heart of darkness as his sidekick Boltie.

At first blush, SUPER seems just another plagiaristic permutation of Hero-Without-Powers, but Rainn Wilson’s studied performance lends a touching pathos to Frank that all us downtrodden mortals can relate to. He pendulums between drama and comedy  surprisingly well, and there is a bittersweet throughline that is only fully appreciated during the film’s final frames.Like KICK-ASS, I applaud SUPER for its brutality, but in taking lethal situations to their logical end, director Gunn loses his way with the tone. In KICK-ASS director Mathew Vaughn had the right idea – retaining the black humor through to the cool ending sequences, and when he did drama, he didn’t try for incongruous levity. SUPER dips into very disturbing drama – the context of the violence becomes serious rather than comedic – when Frank goes postal on Jacques’s henchmen. Laugh or grimace? No amount of cheesy “KAPOW” or “BAM” signs can palliate the moment when Frank tips from righteous vigilante into pathological killer.

But the rape scene is definitely cause for black laughter. And interfering with yourself. As Chloe Moretz was the underage sexually-enticing female in KICK-ASS, here Ellen Page fills the role with barely-legal spinner sultriness and flat-chested brio. Libby (Page) is ambivalent toward Frank but her costumed alter ego Boltie erotically craves the Crimson Bolt’s electric telegraph pole. Yes, SHE rapes HIM. Apparently, this kind of super-hero fetishism is called cos-play. 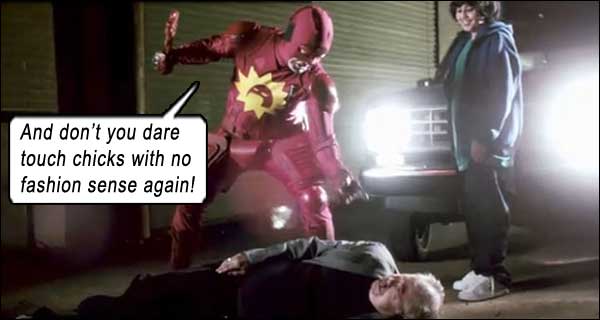 When Boltie looks on lustfully at Crimson Bolt battling henchmen, it is a nod to our ancestral DNA; a primal, tribal courtship dance – watching a boyfriend beat up someone – reflecting the evolutionarily sound tactic of choosing mates strong enough to defend one’s family unit. On film, it can be traced back at least to Natalie Wood in REBEL WITHOUT A CAUSE (1955), as she watches her leathered boyfriend doing something violent, dumb smile and glazed-eyed, orgasmic thrill on her face. In civilized society, it isn’t proper to surface your emotions like that and it has become a form of sociopathy – which it is in Boltie’s case. She goes Wolverine, with a couple of steel claws on her gloves, and extracts a madman’s glee from carving up suspected bad guys. Wait– “suspected”? When Crimson Bolt realizes Boltie doesn’t care if they’re guilty, he knows something is awry in her crime-fighting wiring – but it’s so hot we don’t care at that point…

Just as Nic Cage played the Real Super in KICK-ASS, here comes Nathan Fillion (FIREFLY) – tongue planted firmly in ass-cheek – as an evangelical Super called The Holy Avenger. With Rob Zombie as the Voice of God.

Like most superhero movies (even the ones who have real powers), SUPER only deals with the lowest cogs of crime. If Crimson Bolt wants to fight for his lady love, that’s his prerogative, but if he wants to battle actual “crime,” then waiting in an alley behind an industrial trash bin for crime to come along – though hilarious – is still only targeting what we have been conditioned to believe is “crime” even though any people perpetrating illegal acts in an alley near an industrial trash bin are actually just the RESULTS of crime – crime created by the highest echelons of society responsible for disparity in wealth due to avarice and politics.

Okay, let’s not go there – I can hear you through the internet tubes: “It’s just a movie!” I’m just sayin’: His catchcry of “Shut up crime!” implies he is aiming much higher than a footloose pimp who steals his wife.

The story resolves most unexpectedly. Though it has its faults, SUPER has a depth that will go unnoticed by most who think it is a simple superhero comedy. For not catering to Chick Flick Romantic Protocol alone, it is applause-worthy; for tying up Frank’s character arc emotionally, it is bravura; and for letting us lust openly after someone who looks like she’s just learned how to apply her training bra – now that’s just kick-ass!