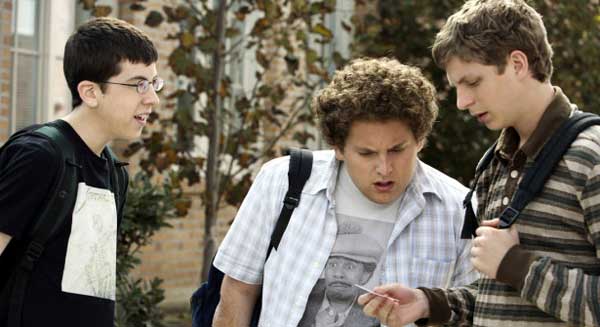 We all remember the first time we considered sharing a condom.

Superbad: The Quest for Piece.

The age-old tale of three underage dorks on a quest for alcohol and chicks in one eventful night, where life happens while they’re trying to live it. We’ve seen this all before (DAZED AND CONFUSED, 1993; THE STONED AGE, 1994), yet there is an edginess to the way this tale is told (by writers Seth Rogen and Evan Goldberg, and director Greg Mottola, produced by Judd Apatow). All previous dork-to-chick movies now lack any bite when held up to SUPERBAD’s bullet-train urgency, modern crudeness and razorburn truths, like a bear trap slamming over your scrote.

High schoolers Seth (Jonah Hill), Evan (Michael Cera) and Fogell (Christopher Mintz-Plasse) try to seal their transition to college with drunken flings with the girls they lust after from afar. Very afar. Clueless to the wonders of women, their naive haplessness drives SUPERBAD.

Following the trend of portly heroes like Jack Black, Jonah Hill brings a charisma to the classic dork like a big ole hilarious charging rhinoceros. In just a scant year, he went from the unpopular kid in ACCEPTED (his most famous line of sycophantic, unfunny dialogue, “Ask me about my wiener!”) to being the wrecking ball in SUPERBAD, with all the best lines: “You know when you hear girls go, ‘I was so shitfaced last night; I shouldn’t have fucked that guy!’? We could be that mistake!”

As vital and strangely Tony-Soprano-sexy as Hill makes his character, Michael Cera’s uber-nerd Evan is a walking “Kick Me” sign, and plays it so fearlessly I want to give him a wedgie throughout the movie.

Then there is McLovin. Simply McLovin. In order to buy alcohol, Fogell scores a fake ID in the name of McLovin. I doubt anyone will remember the actor’s name OR his character name after this, his debut film. The ultra-dweeb is elevated to badass party animal with the assistance of two very irresponsible, law-breaking, hooligan cops (co-writer Seth Rogen and Bill Hader: “We should be guiding his cock, not blocking it”). Forever McLovin.

The girls are merely flesh beacons (Emma Stone, all mature sensuality, and Martha MacIsaac, all perky natural ta-tas), but that’s how boys that age regard them anyway. So no foul. 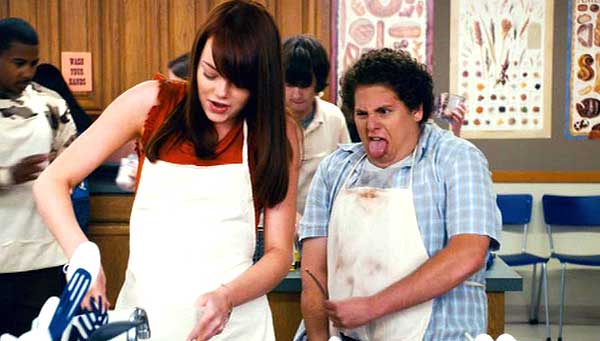 We all remember the first time we came on Emma Stone’s elbow.

After pandemonium piled on pandemonium (Ted Nugent’s Stranglehold gets yet another run onscreen – ROCK STAR and INVINCIBLE come to mind – and Van Halen’s Panama accompanies the police car demolition!), Seth and Evan somehow make the Cool Kids’ party with stolen alcohol. But whereas they hoped to shatter their celibacy at this party, they find it is simply another misadventure that needs to be survived, and come to realize that they mean more to each other as best buds, than any poon they pursue.

They can relax with each other and express honest feelings, rather than constantly being “on” around females; bringing a bromosexual poignancy to that age-old adage: Bros before Hos.

Seth even carries the drunk Evan out of the party like his very own Ho.

The Hollywood Reporter actually chided SUPERBAD for not bravely going “all the way” in a sleeping bag scene where Seth and Evan declare their love for each other – and don’t go Brokeback. I guess two straight guys should suddenly go gay because it’s “in” to be “out” these days. I guess The Hollywood Reporter is as naive as the target audience for GIGLI, who believe every lipstick lesbian is just waiting for some solid Affleck man-tool to come along and pump her full of hetero…

In one of the truly bravest moves in the now pc-gutless, gayophilic Hollywood, SUPERBAD kept its characters straight – and allowed them the humanity to profess their love for each other without resorting to prurient homophobic gags or a homosexual encounter. 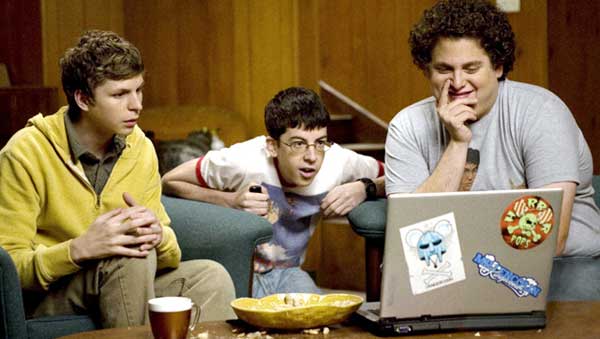 In the final scene, both Seth and Evan meet their intended chicks in the light of the next day at the mall. Uncomfortable apologies are made, with even more uncomfortable impromptu plans made to pair off, the boys finding themselves with the girls they wanted for so long. But instead of the movie wrapping like every maudlin teen romantic comedy that makes “getting the girl” the focus of existence, SUPERBAD continues its brave stance by making its final amazing scene Seth looking back longingly at Evan.

It comes upon us without warning. We think Seth will turn to his girl, but he keeps his gaze tentatively, sadly, on his best friend at the top of an escalator, while Evan does not seem to notice Seth’s look.

The boys never realize it, but the movie gives off the subtle message that to score the girl of your dreams, you don’t have to be duplicitous and get her drunk or be “on” your A-game with trite one-liners. You just have to experience life with her.

Life happening while you’re trying to live it.