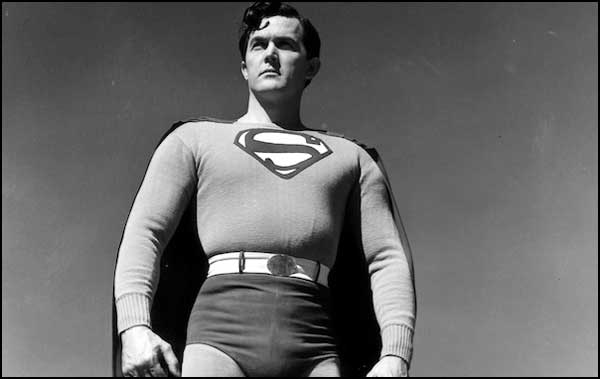 When sucking in your gut sufficed for bodybuilding.

Long before Christopher Reeve became the face of Superman in 1978’s SUPERMAN: THE MOVIE, peering from the distant past comes Kirk Alyn in the 1948 Columbia serial, SUPERMAN. Doughy visitor from another planet, Alyn was faster than a prancing ballerina, more granny-pantied than a locomotive, able to bring ferocious effeteness in a single bound.

The legend begins…in this 15-part serial, against the grain of canon… Planet Krypton, orbiting a blue star (not red), where lived a race of super men and women (unlike Superman’s familiar origin tale of Kryptonians being “normal” under their sun and only “super” under Earth’s yellow sun — but if everyone was super, how did they know they were super?), where scientist Jor-El explains to the Council of Republican Douchebags that Krypton was being pulled into their star, soon to disintegrate (“A force that even we super men are powerless to prevent” – yes, but to whom or what are you comparing yourselves? If you couldn’t prevent this disaster, how “super” could you possibly be?!).

The Council demand proof, and, ironically, ends up providing proof of themselves as Douchebags in doing so. I guess the constant earthquakes during the meeting weren’t proof enough for them to vote YES to flee the planet. There’s just no talking sense to Republicans…

In quick order – the baby Kal-El (Jor-El’s son), the rocket ride to Earth, the rural crash landing, the Kents (Martha and Eben Kent, not Jonathan) taking in Kal and naming him Clark, montage of Clark performing super deeds as he grows. Eben pep talks teen Clark, “Because of your great powers, you have a great responsibility”… Ulp! Stan Lee kicking himself that he didn’t think of that, yet spending the last few decades bogarting that well-worn axiom as his own. You Marvel copycats…

After both his parents die, Clark Kent (Kirk Alyn), grown into his glasses and hat, emigrates to the big city; walks into The Daily Planet offices and gets a job as a reporter by pilfering a story from Lois Lane (Noel Neill). The first deed of the man who stands for Truth and Justice is snide theft. Noyce.

Noel Neill looking the sweetest and sexiest we’ve ever seen her. By the time she reprised this role for the television series ADVENTURES OF SUPERMAN (with George Reeves, during its 1953-1958 seasons), she looked like a frumpy soccer mom (it was the short, tight hairdo and stilted theatrical acting), but her hair is long and lubricious here, her blouse is tight against her small chest-swell, her smile is authentic and breezy, she is a young stunner – even with that STUPID HAT. Lois gets knocked out at least once per episode. I think half the attraction in casting Noel Neill was that she was such a little spinner that she could be carried bodily by any of the men in the cast, from the crooks to Superman. So hot, being manhandled like that, and usually tied up… but seriously, anyone who gets knocked out that much should really see a brain doctor soon… 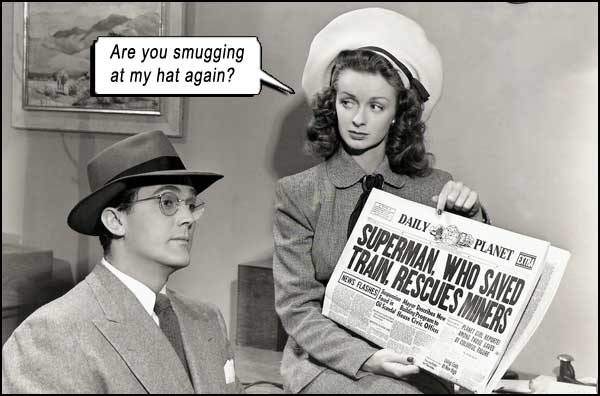 Superman’s first deed in costume is to hop gaily across some train tracks to straighten a bent rail (in a scene that Chris Reeve’s SUPERMAN paid homage to). It’s the first of many annoying depictions of Clark changing into Superman to perform his act of might. I mean, Clark was standing right there alone at the bent rail. He could have bobbed down and straightened it without anyone noticing. Instead, he runs away to change into his duds – as the train barrels toward the bent rail – and loses about 30 precious seconds before prancing back and fixing it in the nick of time.

The funniest canon aspect must surely be Superman’s costume, which is made up mostly of panty. Mostly. No rationale is given for why it is so fruity. Haute couture on Krypton consisted of silver robes and big-ass sashes, so how did Superman even end up with this distinctly unique design? At least in MAN OF STEEL (2015), the filmmakers made Kryptonian fashions resemble Superman’s costume, the “S” being a family crest that means “hope,” the costume itself explained away as “battle armor.” We know now that creators Jerry Siegel and Joe Shuster (both 34 years old at the time of this serial’s release, and giving it rave reviews) designed the costume to emulate “circus strongmen” of their day, but in this first live action outing, Superman suddenly appears from behind some buildings in that Mardi Gras outfit with his panties up to his nipples and expects no one to laugh because audiences were indoctrinated with the costume from DC Comics (since Action Comics #1 in 1938), and the innovative Fleischer Superman Cartoons (1941). Did audiences just accept/respect the blue and red tights because the man wearing them could punch a hole in the Earth?…

The Spider Lady. Yes, she turns up that suddenly. Carol Forman is the blonde villainess in black evening gown and lace mask, with a giant silvery spiderweb adorning one wall of her lair, which she uses to magnetically draw people into, and electrocute them. (How she makes the people magnetic is anyone’s guess.) She covets a reducing ray, created by an old scientist, “Not even Superman will stop me getting that machine.” What the ray “reduces” and what she needs a reducing ray for is anyone’s guess. Still, it must have been pretty progressive for this movie to portray a woman boss! In an age when doughy white guys ruled the world, bad guys were called crooks and always wore suits and hats, and everyone pronounced “police” as “pleece,” taking orders from the lesser sex must have been either very liberating or very infuriating for men. Spider’s bottom bitch is henchman George Meeker (man, that guy is evil in everything! He was Bob Hope’s and Bing Crosby’s nemesis in 1947’s ROAD TO RIO, and the crime boss in the classic MST3K episode, I ACCUSE MY PARENTS, 1944).

Spider is so confident about Superman’s inability to stop her because she’s got her hands on some kryptonite. This meteorite from the exploded planet Krypton is explained as robbing Superman of his powers, almost to the point of death. In a scene where Clark meets with the scientist who found it, he suddenly reveals his secret identity like a bitch, so that the scientist will not let the kryptonite fall into the wrong hands. Which it does.

Clark is far more begrudging about his dual identity with Lois, which aligns with Superman canon of Lois always suspecting, never discovering. (Well, Superman does speak in a more basso voice than Clark – at least Alyn was doing something to distinguish the characters.) Yet the main dynamic between Lois and Clark here is combative (Lois sees Clark as a rival for her position as star reporter); between Superman and Lois, businesslike (he saves her, she thanks him, he saves her, she thanks him, he saves her, etc.), and because it’s a tale for kiddies, there is no whiff of the sexual tension that would envelop this most paradoxical of threesomes in future incarnations. Matter of fact, Lois stomps all over Clark, calling him “Little man!” (Ow!), tricking him into exiting a car and driving off without him, ragging on him for phoning the police instead of driving into a life-threatening situation, “That’s ONE way of avoiding danger!” – What’s the matter with you, woman?! Lois’s suspicions about Clark being Superman would become a major subplot in future Superman media, but it barely holds her interest here. As long as her spinner bod is being manhandled to safety by that big blue lunk. 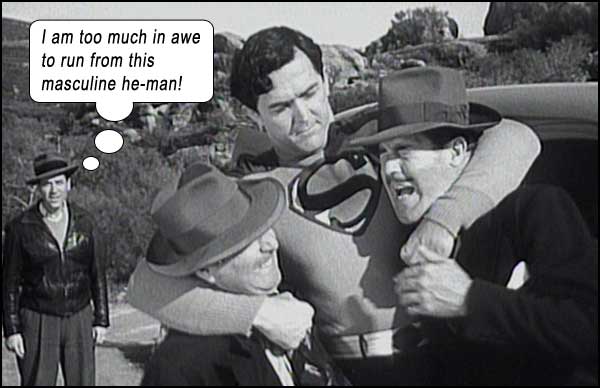 You’ll (probably) believe a man can (kinda) fly! Directors Spencer Bennet and Thomas Carr get around the thorny problem of depicting Superman in flight by having all his flying scenes rendered as cartoons. As soon as he takes off, Superman himself becomes a cartoon superimposed over the live film. It was the only tech that existed at the time; innovative and ingenious – and almost seamless (even though the filmmakers feel it is the worst element of their production). The cartooning was the classic style of drawn frames, and of a high quality, although in the “feature film release” of SUPERMAN (edited down to 156 minutes, from its full 244 minutes), the classic cartooning is replaced by the Monty Python/Terry Gilliam style of cutouts, which – in my opinion at least – ruins the original cartooning’s unique stamp.

No matter, as the SUPERMAN serial is only interesting from an academic standpoint; a curio from the distant past, with five writers (headed by Arthur Hoerl and Royal Cole) loading it with countless plot points that make it quite unwatchable for pleasure: 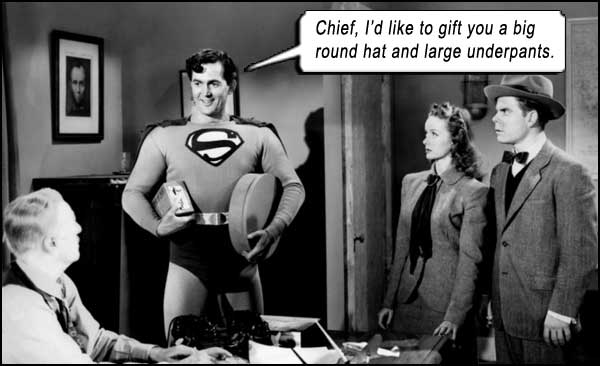 Columbia’s first superhero serial, BATMAN (1943), was so successful, it gave them the impetus to invest in this SUPERMAN serial (which was harder to stage due to the flight scenes). SUPERMAN, in turn, was also a success, that allowed Columbia to fund a BATMAN AND ROBIN serial in 1949. This spurred the next Superman serial, ATOM MAN VS. SUPERMAN, where Kirk Alyn reprised the role that would make Christopher Reeve famous. 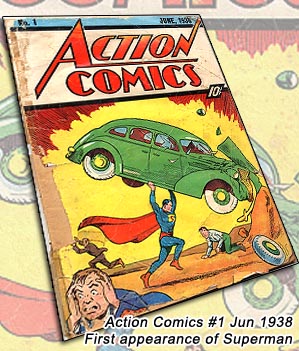 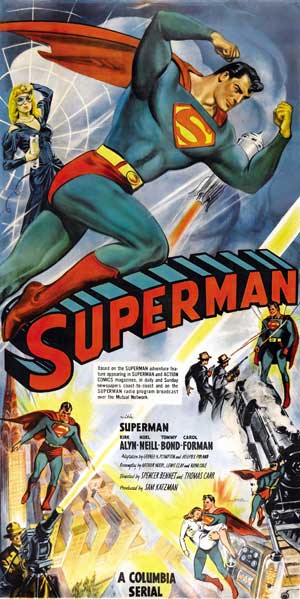 CHAPTERS
1. Superman Comes To Earth
2. Depths Of The Earth
3. The Reducer Ray
4. Man Of Steel
5. A Job For Superman
6. Superman In Danger
7. Into The Electric Furnace
8. Superman To The Rescue
9. Irresistible Force
10. Between Two Fires
11. Superman’s Dilemma
12. Blast In The Depths
13. Hurled To Destruction
14. Superman At Bay
15. The Payoff