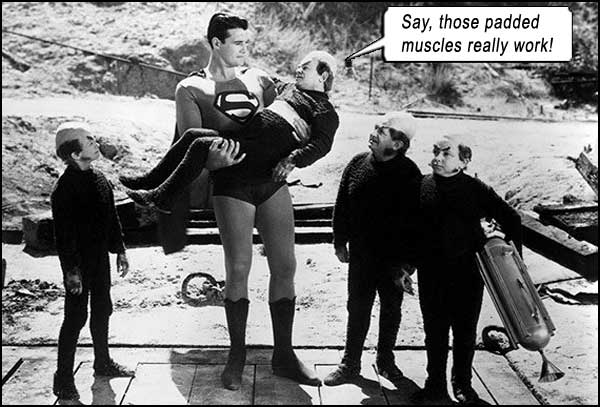 The first feature-length DC Comics superhero film, SUPERMAN AND THE MOLE-MEN is a theatrical pilot for the ADVENTURES OF SUPERMAN television series.

Starring George Reeves as Superman/Clark Kent and Phyllis Coates as Lois Lane, MOLE-MEN, hampered by low budget and second-rate writing and direction, is a snoozefest, with a social message of tolerance that is no doubt lost on its core demographic of 12-year-old boys.

Clark and Lois are sent to a hick town to cover the drilling of the deepest oil well in the world, but find that the well has pierced the core of the Earth. When no one is looking, dark-furred midgets emerge from the well, and terrorize the town by being potentially radioactive. And by being Black-Furred and Nearby. Superman advocates for the “mole-men” when the town whips itself into a frenzy to hunt them down and kill them. 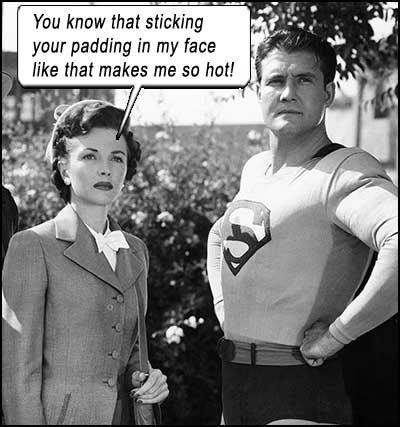 The production company is Lippert Pictures, which should tell anyone familiar with Robert L. Lippert’s roasting on MST3K, that this is a B-picture at best, thus no budget to include any of the familiar Superman-themed elements – no Daily Planet newspaper (Lois and Clark are introduced when they arrive at an outdoor location that is just bushes and rocks), no Perry, no Jimmy, no real attempt to personalize the lead characters (beyond inserting them into the plot with a quick intro narration about some kid coming to Earth with powers), no origin story, no Lois-Superman romance, no Metropolis, no actual flying scenes (only taking off and landing, which are the most innovative segments of the piece). There is barely any story (from Robert Maxwell, who wrote as Richard Fielding for his few ADVENTURES OF SUPERMAN episodes) and adequate direction (from Lee Sholem).

If you know the ADVENTURES OF SUPERMAN series, you’ll recognize Reeves’ posedown in the intro – the same footage is used in the series: arms akimbo on womanly hips with big-ass panties, then the cross-fade into Clark Kent (wearing what looks like a David Byrne outsize stage suit), then another cross-fade back to Superman with stars and stripes flying behind him. And those big-ass panties. Which, looking back on it, seems amazing that NOT ONE PERSON was repulsed by, in real life or onscreen. There were always the underpants-outside-trousers jokes by the public, but that didn’t change the costume design by one thread!

Movie is short (just under 60 minutes), and opens in complete boredom as miners begin closing a mine (slowly), just as reporters from a “big city newspaper”, Lois and Clark arrive (slowly) in a car. Head miner tells Lois it’s the “deepest mine dug – 6 miles down!” and Lois exclaims, “Good heavens! That’s almost to the center of the Earth!” Because, as every ace reporter knows, the Earth is only 12 miles in diameter.

Phyllis Coates (looking a lot like Noel Neill from the Kirk Alyn SUPERMAN serials) plays Lois as a “firecracker.” Her strong character, and ability to tangle verbally (if not physically in one instance) with men must have set her apart from the damsels-in-distress of the day. There is no need for her to be smitten with Superman just yet, so there is no “weak” romantic trait in her character here, and she is constantly undermining Clark for running away from danger. Noel Neill, though also undermining Clark, seemed to spend more time being knocked out and rescued, whereas Coates’ Lois definitely stands up for herself – although she retains that soccer mom ‘do, a long-strap purse that goes everywhere with her and a STUPID HAT, that belie her modernity and individuality (sigh – fashion!).

George Reeves (who was cast because Kirk Alyn wanted too much cash) plays both Clark and Superman exactly the same – smug. Even in the Fleischer Superman cartoons, at least Superman’s voice would attain a deeper baritone once he changed from Clark – “This is a job… FOR SUPERMAN!” – but not this Brylcreemed cheese orator. Maybe if he worked out, and those embarrassingly obvious padded muscles were real (we can even see the edges of the prosthetics under his costume!), then the smug wouldn’t be so aggravating. There is no separation of smug between his two characters. None. So when Clark runs off, even though Lois accuses him of being a coward, it is merely like a man in control who is leaving, rather than a wimp running away from danger. At one point, Clark actually goes into a hotel door – and Superman emerges. No lightbulbs going off, Lois? Nothing, huh? 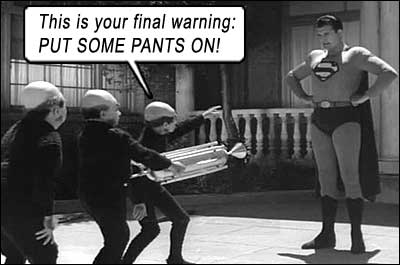 Billy Curtis (who would appear later in ADVENTURES OF SUPERMAN as Mr. Zero, and would become very recognizable as the midget sheriff in HIGH PLAINS DRIFTER), is the lead mole-man. He shuffles out of the well with his pal (wearing bald-caps and dressed in black turtlenecks that are meant to be fur), peers in a window and scares Lois. She fearfully relates to Clark, “They had bodies like moles…” Jesus, woman! You’ve never seen a midget in a turtleneck before?

Benson (Jeff Corey, renowned Bad Guy character actor, TRUE GRIT) assembles a posse in town to hunt the mole-men. Superman intervenes. Benson, barred from shooting the mole-men, is very quick to shoot Superman instead. Which is one of the stupidest plot points ever: Benson is a small town miner, terrified of actual alien creatures threatening the life of his town (with radiation), so resorting to arming himself to defend his livelihood, family and neighbors. When Superman intercedes for the aliens, it’s not like Benson is a seasoned killer who can just willy-nilly, with no conscience, gun down an unarmed man. Does he regularly go around shooting people who disagree with him? And it seems like the town is unfamiliar with Superman’s powers (no one exclaimed “Superman!” when they saw him), so essentially, Benson was trying to KILL Superman (not knowing that bullets would bounce off him). This is not like killing an “other” alien intruder – this is a MAN Benson is shooting at. And even if he didn’t kill Superman, shouldn’t Benson be convicted by the local authorities for attempted murder?

To make us believe a man can fly, they show Superman taking off (as they start that epic flying music), and then a quick shot of his feet going out of frame (i.e. he is being yanked upwards). With landings, Superman is shown coming down into shot, feet first (i.e. either jumping into frame or being lowered fast by wire) and then a quick cut to him on the ground. It’s innovative for the non-budget, but it’s a total wind-up for fans who thought they might see their hero actually fly. There is one animation gimmick, where Superman catches a falling mole-man in flight. The averted-sight flight scenes are the only artful part about this piece of B-movie schlock.

With a poster that looks like Superman had a bad Botox incident, MOLE-MEN is renowned for being the first appearance of George Reeves as the Man of Foam Padding, but it exudes a smallness and a cheapness; an ethos where no one took superhero films seriously, so granted them no budgets, so the films had to make-do with meager  production values, inept story elements and lackluster performances. 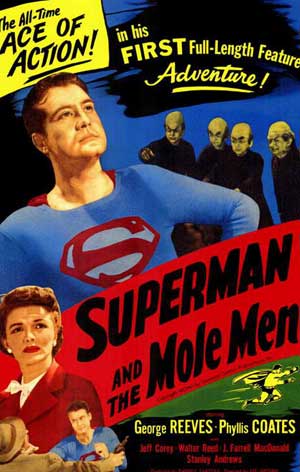 Did an adult write these plot points?

The remaining mole-man escapes back to the subterranean hatch from whence he crawled, and – we presume – crawls the 6 miles back down to his homeland. And returns with 2 other mole-men and a big ray gun.

They fire on Benson – and after 20 seconds of rays, Benson suffers nothing more than being pushed up against a wall and becoming kinda tired. Superman jumps in front of the ray, as if he’s saving Benson’s life (creating a life lesson to rescue your enemy), but Benson could’ve taken at least 20 more minutes of that wispy ray’s pounding before he broke a nail. Great weapon.

Whatever we may think of SUPERMAN AND THE MOLE-MEN, it achieved its purpose of exciting the necessary television executives, and the TV series ADVENTURES OF SUPERMAN ran for 6 Seasons, from 1952 to 1958, making George Reeves a household name, and cementing him as THE Face of Superman for every generation, until Christopher Reeve usurped that crown from him in 1978.

After the Japanese internment camps of WWII, and the agitprop conditioning against “foreigns” (even the 1940’s Fleischer SUPERMAN cartoons had an episode called “Japoteurs”!), the pendulum of decency was swinging back towards tolerance in American society. SUPERMAN AND THE MOLE-MEN was a reflection of this cultural shift. It was probably not the best vehicle to make this statement, as Superman’s demographic was too young to absorb it.

To make it utterly explicit, the mole-men destroy the drill that infiltrated their subterranean home and Lois dramatically intones, “It’s almost as if they were saying, ‘You live your lives, and we’ll live ours.’” Well, almost. More likely, ‘FUCK your drill and your big panty areas in our faces!’

The story is so static and the situation so manageable that we must ask, “Was this really a job for Superman?”