It’s SUPERMAN II in Donner Vision! Released on DVD in 2006 on the strength of fan uproar, THE RICHARD DONNER CUT is better than the Richard Lester debacle. But not by much.

The overarching tale is the same: as Superman relinquishes his powers to play patticake with Lois Lane, three supervillains from Krypton terrorize Earth, led by General Zod, who has a pathological need for people to kneel before him. And Superman must save the day by talking to Marlon Brando in a dress.

Originally released in 1981, SUPERMAN II was completed by director Richard Lester after director Richard Donner was fired by the producers. It is well known that Donner had shot both SUPERMAN: THE MOVIE (1978) and SUPERMAN II simultaneously, so had much of II in the can by the time he was ousted. After many reshoots and restructures, comedy director Lester could not find a happy medium between the mythos and the madcap, thus delivering a patchwork quilt cheesefest.

Fan tumult over Donner’s mythic unreleased version reached such a tipping point that by 2006, studio heads commissioned Michael Thau (editor on SUPERMAN: THE MOVIE) to oversee assembling Donner’s original footage, which is packed with alternate and unused scenes, alternate takes and a slightly different order of events, that projects a more respectful, slightly darker vision than Lester’s. And John Williams‘s majestic music has been reinstated. Yet SUPERMAN II: THE RICHARD DONNER CUT still doesn’t exhibit the cohesion of a credible film.

It’s not like Donner had unlimited footage of a completed movie that he just didn’t get the chance to put together. It is still a patchwork quilt – except now it’s Donner’s patchwork quilt; not so much a Director’s Cut as a diluted vision of What Could Have Been.

But the mediocrity of both finished versions – Lester’s and Donner’s – should not be blamed all on the Richards.

Most of the blame is on Terence Stamp as General Zod and Gene Hackman as Lex Luthor. Because they are such incredible actors! Their commitment to these “comicbook” roles is stunning, their acting impeccable, their timing innate. And they show up all the other performers as the low rent wannabes they are. (In the DONNER CUT, there is much more Hackman, which does more for the comedy that Lester was supposedly aiming for by putting all that slapstick in his version.)

There is also Brando mincing about as Superman’s father, Jor-El, orating cheese in that Kryptonian/Shakespearean accent in many more spirit soliloquies than the Lester version, woiking his woman’s pants suit till it glows in the dark.

While veterans Ned Beatty (as Otis), Jackie Cooper (as Perry White), Sarah Douglas (as Ursa) and E.G. Marshall (as the President) don’t get the screentime to act much, the limp principals mill aimlessly in the foreground as if they’ve just missed the bus for a toothpaste commercial – Marc McClure (as Jimmy Olsen), Margot Kidder (as Lois Lane) and the Man of Steel himself (Christopher Reeve, whose Clark Kent/Cary Grant impression was not bad, but who definitively earned his epithet Man of Wood whenever he donned the cape and panties).

Stamp and Hackman bury these people alive with their chops.

Lois Lane’s romance with Clark Kent/Superman is still laughable; the barest of chemistry between the most famous paradoxical love triangle in the galaxy. 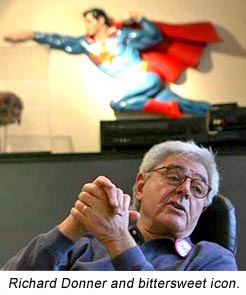 In DONNER CUT, Superman actually shares a bed with Lois before he relinquishes his powers, and afterwards we see a quick shot of Lois wearing Supe’s blue top as a girlfriend wears her boyfriend’s outsize t-shirt after sex. It’s gross. (For the reasons why Superman can’t mate with a human female, I refer you to Larry Niven’s well-thought-out piece, Man of Steel, Woman of Kleenex.)

To restore the Metropolis battlefield after he defeats the supervillains, and to erase Lois’s memory, Superman spins the Earth backwards in time. Before it was the climax to SUPERMAN, that plot point was the planned climax to this movie. And both movies suffer the same paradox – that in turning the Earth back, all the threats he wished to negate would still be threats (Luthor’s warheads, the earthquake, the three supervillains), only he would know how to avert them more judiciously. Yet both times when he turns the Earth back, all the threats have disappeared. Lois is fine and EVERYTHING is fine.

Ironically, turning the Earth back is probably the best deed Superman ever performs – but for the wrong reasons. You see, in SUPERMAN, when Glenn Ford told a young Clark he was “here for a reason – and it’s not to score touchdowns,” it implied Superman would concern himself with more than just petty crime; that he might address the sociological reasons that create crime in the first place. Think of what a super man might do with corporations, politicians, churches, oil congloms, pharm companies… Well, Superman went around anyway like a well-intentioned blockhead and stopped smalltime bank robbers and saved pussies.

But it dawns on me: When Superman spins the Earth back in time, he actually lives up to his potential and saves millions from catastrophe– But hang on!–[sound of needle scratching across record]

In SUPERMAN, he didn’t spin the Earth back necessarily to save millions. He let all of them die horrible deaths – even though, we see in retrospect, he had the power to save them – and only spun Earth back SO LOIS WOULD LIVE. And in II, he spins the Earth back not necessarily to undo the billions in damage Metropolis sustained, but to ERASE LOIS’S MEMORY!

The final coda scene is retained in DONNER CUT: Clark Kent gets revenge on the trucker who beat him up in front of his chick (which isn’t really honorable or righteous, because he’s got super powers again – how big of a man is he to pick on this powerless human?). I’ll say it again – as his Earth father said: “here for a reason – and it’s not to score touchdowns.” Meaning, while Clark is getting his petty revenge, 50,000 kids in Darfur are dying for want of a super man to bring them Real Justice.

As far as the fans are concerned, “Directed by Richard Donner” in the opening credits is the only real justice that matters.

More facts about
SUPERMAN II: THE RICHARD DONNER CUT
at the Superman Homepage.