Could that possibly be the cheesiest line in cinematic history? Yes. Yes, it could; most certainly aided by the level of fruitage employed by Terence Stamp as the imperious General Zod, resplendent in black, pseudo-leather, thigh-high disco boots and heavier eyeliner than Avril Lavigne. 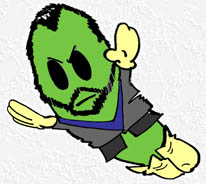 Consequently, SUPERMAN II is two movies mashed together to make HALF a movie.

Badly scripted (by too many cooks – Mario Puzo, David Newman, Leslie Newman, Tom Mankiewicz), badly acted (by SUPERMAN’s principal cast: Christopher Reeve, Margot Kidder, Valerie Perrine, Marc McClure, Gene Hackman – well, Hackman’s good in anything, but his scenes in II were shot with Donner, and he refused to do any more scenes for II, which resulted in stand-ins finishing his job from behind), badly directed (Lester’s forte was comedy), badly edited (by John Victor-Smith, with amateurish looping and unsalvageable scenes that had to be included because nothing else was shot), badly scored (by Ken Thorne, trying to augment the great John Williams’s music, but churning out a bombastic hash instead); were it not for Superman himself – that blue-clad icon with the red towel tied ’round his neck burned into our neo-cortexes since birth – this movie would be as unbearably ludicrous as E.G. Marshall‘s wig. 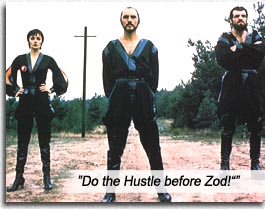 Superman hurls a nuclear bomb into space, which is so powerful it releases three Kryptonian supervillains from the previous Superman movie – Zod (Stamp), Ursa (Sarah Douglas, as some kind of sadomasochist dyke) and Non (Jack O’Halloran, as a big dumb galoot) – who, all possessing the same powers as Superman, decide to conquer Earth at the same time that Superman decides to conquer Lois Lane by inexplicably abdicating his powers to show his love for her. Smart move, puss.

(It would occur to us kids years later that Superman got rid of his powers so he wouldn’t tear Lois’s vagina a new asshole with his super-thrusting. Even though that aspect is never brought up in the movie or by the producers, we know this to be true, due to our dirty minds.)

Did Kal-El fail to consider that trailer-park Lois fell in lust with a SUPER man and that the loss of his powers would translate to a nine-to-fiver brain-fry existence, coming home to find Lois with a mudpack on her face watching Jerry Springer, ignoring the screaming kid? And having an affair with Green Lantern. After all, that’s what she “fell in love” with – super powers. “In brightest day, in blackest night / No evil shall escape my sight…” Whatever you say, Greeny; you had me at “Let’s fly to Paris for lunch…” 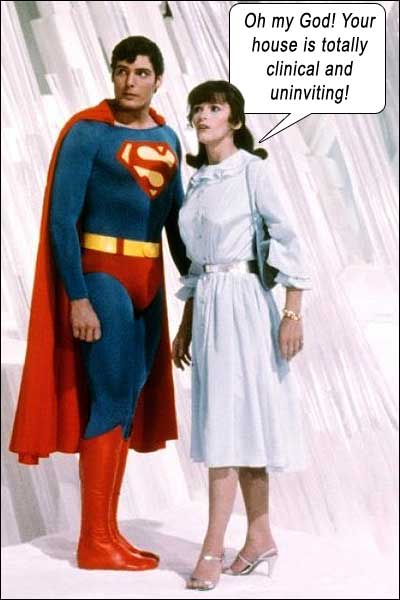 SUPERMAN II contains the iconic Honeymoon Suite scene: reporters Clark and Lois visit Niagara Falls, posing as a married couple to uncover a completely McGuffin “Niagara Falls racket” (that is never mentioned again after its exposition line). Lois, suspicious that Clark is Superman, throws herself into the river rapids, thinking to make Clark reveal himself when he saves her, but Clark manages to expend a minimal amount of super to pluck her from the raging torrent. Back at the suite, he accidentally reveals himself, whereby his desperation to pluck her with his raging torrent precipitates Superman flying Lois to his Fortress of Solitude, to consult his magic crystals on The Birds and The Bees.

Meanwhile, General Zod is camping it up in Midwest Podunk with his dyke and galoot, orating cheese in High English vernacular, then kicking the badass American army in the groin and storming the White House to make the President (E.G. Marshall’s crooked wig) kneel before him.

The unthinking script has Ursa mock a helicopter, “Look! They need machines to fly!” (well, so did you on Krypton, honey!) and pick up a snake that bites and hurts her – even though she is a woman of steel.

The script continues to unthink… as Clark, driving a rental car back from the North Pole with Lois, gets his shiny new human ass whupped by a trucker and, to add insult to his injuries, also learns of the three supervillains who are stealing his thundercheese. (As a further insult, the trucker was probably Canadian.) Fearing it just might have been a mistake to go homo sapien (what gave it away – the internal bleeding?), he hikes back to the Pole to get his supermojo back (I guess three supervillains taking over the world wasn’t a big enough emergency for Lois to give him the RENTAL CAR – already treating him like a nutless puss).

And – like Final Notices, Final Destinations, Drop-Dead Deadlines, etc. – we find that the Irreversible Anti-Super Effect wasn’t that Irreversible after all, as Superman’s blue-groined hardbody is soon streaking through Metropolis skies to tangle with the three supervillains with stunningly mediocre special effects. 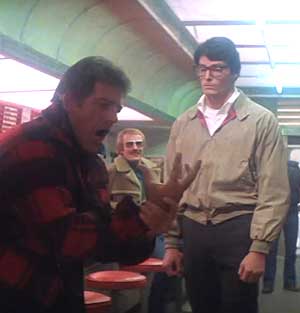 There is a coda scene that is quite disturbing. Clark, now with super powers again, goes back to that diner where the trucker beat him up when he was mortal. And beats up the trucker. As much as we are satisfied that the bully trucker got his comeuppance, it shouldn’t be like this. Because Clark has super powers! It’s a completely one-sided fight. It seems very petty of Clark to stoop to beating up this guy in a slapstick manner simply to get revenge laughs, when the idea of Superman should be to curb bad human behavior by example, at the least, to teach wrongdoers a lesson. (And doesn’t Clark have something more humanitarian he could be doing anyway?)

Simply beating the trucker and flippantly commenting to the surprised bar-folk that he’s “been lifting weights,” is not going to stop that bully absolutely whaling on the next wimp that walks in. (If Clark had actually trained as a mortal and returned to beat the trucker, that would have been commendable, but for a Superman to do it – psh!) What if Superman had flown that guy to a hospital or homeless shelter and educated that bully on how he could be the solution to the ills of the world rather than the problem? The message would have been infinitely more sobering than a simple beating.

It is a real pity that the SUPERMAN franchise is not better than it is, because there is something so inspiring and awesome about John Williams’s soundtrack, truly capturing the essence of thunderous power, a majestic, sweeping paean of an otherworldly being who can bend the world at will. We vicariously thrill to the possibilities of being a Superman, or of loving a Superman. It’s the lottery one-hundredfold.

Ironic that General Zod mincing, “KNEEL BEFORE ZOD!” was part of the reason the franchise was brought to its knees.

imdb
Word Count: 1,180      No. 168
Man of Steel, Woman of Kleenex.
(Why Superman Can’t Sire a Child with Lois Lane)
by Larry Niven.More facts about
SUPERMAN II: THE RICHARD DONNER CUT
at the Superman Homepage.