The Last Gasp of the Last Son of Krypton. 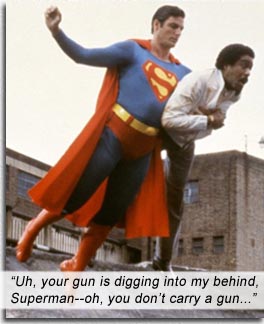 Richard Pryor’s performance is the only credible meat in this debacle, which features the relatively new concept of “computers” being utilized for eeeevil, and with a subplot of Superman affected by hybrid kryptonite which doesn’t kill him but makes him do really bad things like get drunk and flick peanuts at mirrors. (See what I mean about taking it seriously?)

Though Pryor is surrounded by now-veteran SUPERMAN co-stars (Doug McClure as Jimmy Olsen, Margot Kidder as Lois Lane, Jackie Cooper as Perry White) and A-Listers Robert Vaughn (as the villain) and talented comedienne Pamela Stephenson (as the villain’s T&A, who does nothing more than minimally expose her T&A), he alone saves the movie from descending to the Ninth Level of Hell with his inimitable turn as a computer hacker patsy hired by Vaughn for evil ends.

Christopher Reeve is once again the Man of Steel and is given such an abominable script – coupled with the worst and cheapest flying effects you will ever see – that wearing his neon blue and red duds out in public is starting to look exceptionally gay.

Gone is the slick production value; gone is the tagline “You’ll believe a man can fly” because when you watch SUPERMAN III, you’re pretty sure a man can’t fly and that he’s being levitated by guy wires attached to a crane. Gone is the majestic music – Ken Thorne is only allowed minimal snatches of John Williams’s grand theme, the rest of the soundtrack consisting of slapstick toodles to accompany director Richard Lester’s supposedly uproarious slapstick action. To call the opening credit sequence a third grader’s idea of comedy is a compliment.

I’ve said this before: with the powers that Superman possesses, he shouldn’t even THINK about “bank robbers” or “people falling down and hurting themselves” – this guy should be dealing with crime at the highest corporate and government levels, the “white collar” crime that CREATES low level crime by creating economic social rifts.

But who is really paying attention when his undies are so bright and tight? By the mid-1980s, Superman comicbooks had been developing storylines and character over 50 years – yet this third modern SUPERMAN movie still retains the provincial mentality of the 1950s.

Superman is handed pseudo-kryptonite by Richard Pryor (doing his best General Patton – one of the films three great laughs) which doesn’t kill him, but makes him go bad: Supes straightens out the Leaning Tower of Pisa, blows out the Olympic torch, punctures an oil tanker, and gets drunk. You know, true evil. Oh, and he almost grows a three-day shadow, the universal stamp of sexy Euro villains. And when he has the opportunity to slam Pamela Stephenson atop the Statue of Liberty, he accedes to doing her a favor first in return for her sexual favors! Yeah, badness like Mister Rogers.

It takes an hour for the film to reach this semi-interesting point – and then it goes nowhere with the concept. Superman merely splits into two people – himself and Clark Kent – and battles soporifically with himself in a junkyard, raising the film almost to the level of boring. Clark Kent triumphs. Hooray for dorks!

Another subplot involves Clark Kent returning to Smallville for a school reunion and hitting the picnic blanket hard with Lana Lang (Annette O’Toole) and her son. A plot strand – like the factory fire or the dual personality bit or the fat couple vacationing in South America – that goes nowhere at super speed.

One would think that director Richard Lester, after making such a hash of SUPERMAN 2, would have been issued a restraining order against any Superman product. Instead, producer Alexander Salkind re-hires the insipid comedy director to make a hash of SUPERMAN III as well.