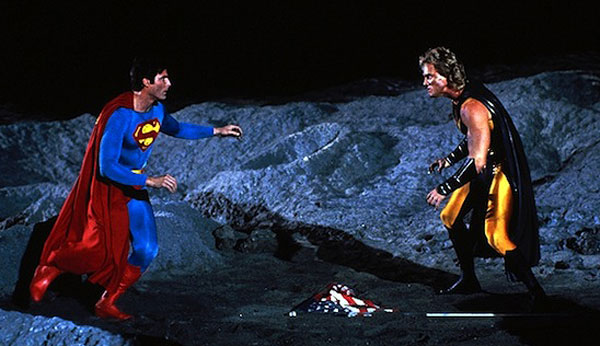 How sad. The last SUPERMAN movie with the most famous Man of Steel, Christopher Reeve (1952-2004). Since arriving from Krypton in 1978, Reeve became the acknowledged Superman due to – or despite – the SUPERMAN franchise. The producers of the franchise, Alexander and Ilya Salkind, let him down like an ape from the future. Like the PLANET OF THE APES series, after the first stunner movie, each successive sequel would be funded less than the one before, therefore procuring less talented production and nullifying the essential element of authentic flying sequences, until no one – not the filmmakers, the marketers or the public – took the legendary superhero seriously any more.

And the sad part is: Christopher Reeve would never get the chance to atone for all the waterheads around him who sullied the majestic concept that he alone would remain the Face of. Eternally proud to be, in his words, “the onscreen custodian of the character,” after his paralyzing horse-riding accident in May 1995, it was out of the realm of possibility for him to ever don the red cape and panties again, to redeem himself and the franchise in maybe just one more tale, just one well-produced, well-written juggernaut film, featuring an older Superman in a cynical, gritty movie that might have restored the mythos to its legendary footing.

And that’s the sad truth that eats at the base of my brain like a deathworm as I watch SUPERMAN IV: THE QUEST FOR PEACE. 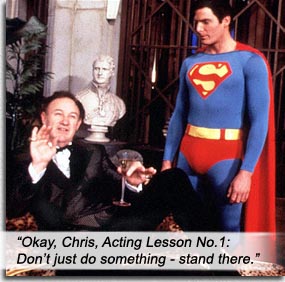 Superman (Reeve) takes it upon himself to rid the world of nuclear weapons, catching every missile launched by the Soviets and the USA, piling them into a giant net in space and throwing them into the sun. Evil genius Lex Luthor (Gene Hackman) uses this knowledge to construct a missile that contains mutated DNA of Superman’s, so that when he hurls that missile into the sun, an evil super being emerges, Nuclear Man (Mark Pillow), with allegiance to Luthor and one thing on his tiny mind, “Destroy Superman!”

Regarding my old refrain/complaint that Superman should be using his powers for more than mere bank robbers, SUPERMAN IV actually gets it right! The writers (Reeve himself, with Lawrence Konner and Mark Rosenthal) pitted Superman against a threat which could not be taken out with a simple super punch; an amorphous “evil” – nuclear war – which called for a super solution. The movie fails because the execution of the solution is handled in that same juvenile way we have come to expect from Hollywood execs who believe audiences haven’t got the brainpower to understand anything beyond a super punch.

In response to a decidedly Reagan-ish president announcing an arms buildup, Superman announces at a United Nations symposium that he will rid the world of nukes. It brought a fictional character into hard reality and the movie was suddenly relevant to a generation who were growing up under Ronald Reagan’s idiotic Strategic Defense Initiative of 1983, which escalated the arms race worldwide. The stage was set for SUPERMAN IV to impress us with the ramifications of a super being’s intrusion into mortal conflicts; of a godlike being enforcing his unilateral view of peace; of the irony of heeding peace advocacy only from someone with the ability to destroy you… instead, the story derails immediately as the U.N. breaks into unanimous applause at Superman’s announcement. Everyone? If everyone was in such agreement, why do we need a super man to resolve an arms race issue?

And the juvenile, passive-aggressive manner in which Superman enforces his ape law – capturing missiles AFTER they’re fired – illustrates further how this movie is one big missed opportunity and that Superman still doesn’t realize how to utilize his super powers efficiently. Because he is doing exactly the same thing with nuclear disarmament as he did with crime – attacking the issue from the tail end. We are not expecting him to bore us to death in political discussion, but even on a simplistic level, wouldn’t it be more expedient to dismantle the nuclear facilities and launch sites and underground stashes of these missiles rather than tackling them singularly after they’re fired?

Then Nuclear Man appears. Cue super punching. And all semblance of intelligent thematic grist goes flying out the window faster than Superman speeding to save Lois Lane’s pink knickers.

At least Gene Hackman was game enough to actually appear in this film. (He passed on SUPERMAN III.) He tries valiantly, but even he fails to save the movie, encumbered as he is with the talentless Jon Cryer, who, as his sidekick in the place of the great Ned Beatty, effects an insufferable Valley Boy accent and tries not to let Hackman’s shadow fall upon him for fear it will crush his vapid soul.

Once again, Jackie Cooper is Perry White, Marc McClure is Jimmy Olsen and Margot Kidder is Lois Lane. I’m embarrassed for the lot of them.

Buy SUPERMAN IV on DVD….it will be the only time you’ll ever spend more on a DVD than the producers did on the special effects.
— YouTube comment.

Director Sidney J. Furie (LADY SINGS THE BLUES, IRON EAGLE) just didn’t have the ‘nads to pull this production together; from the opening titles (which cost $2.50 and a handjob) to the continuity, to the nuke storyline that went completely ignored after Nuclear Man appeared, to the inane “romance” sequence where Clark reveals he is Superman to Lois only to hypnotize her to flense her memory within five minutes of doing so, to the slapstick where Superman tries to double-date Lois and new Daily Planet executive Lacy (Mariel Hemingway) as himself and Clark Kent, to the laughable chroma key flying effects that make us forget we once believed a man could fly.

Just one example of the uncaring effects department: when Superman is on the surface of the Moon with Nuclear Man, we can see the ruffles in the curtain that is meant to be the “black night sky” behind them!

Well, at least they bought the rights to the magnificent John Williams score.

At one point, Nuclear Man threatens Superman, “If you don’t tell me where Lacy is, I will hurt people,” then makes good on his threat by firing explosive rays at buildings and cars, not hurting any of the thousands of gawping mob gathered to see the fight just a few feet to the left of anywhere he’s firing. To which Superman screams in alarm, “The people!” Uh, what people? The ones he’s NOT hurting?

Nuclear Man kidnaps Lacy and flies into space with her, but Lacy doesn’t suffocate or anything, cos in a SUPERMAN movie, people can breathe in space apparently.

When Luthor asks Superman how he discovered Nuclear Man’s weakness, he replies, “high school physics.” Well, that same physics applies to the Moon you just shifted out of orbit, Super Einstein! Have you any idea of the chaos you’ve created with the seasons and the tides and biological ecosystems, not to mention shipping, calendars, menstrual cycles and the price of rice in China? 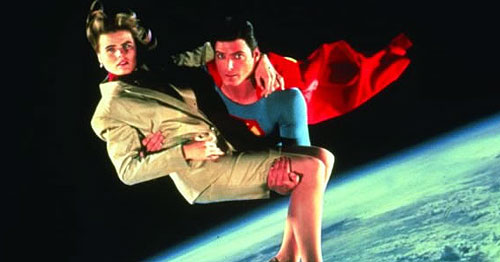 Because in space, no one can hear you breathe…

At the conclusion of this Golan-Globus Production (ooooh, say no more…) Superman proselytizes about the plot point that was forgotten when Nuclear Man showed up, “Once more we’ve survived the threat of war and found a fragile peace” (Is he talking about another movie? Didn’t he just rid the world of nuclear weapons?) “I thought I could give you all the gift of the freedom from war, but I was wrong. It’s not mine to give.” (It is if you want it to be, Man Who Can Push The Moon Out Of Orbit.) “…there will be peace when the people of the world want it so badly that their governments will have no choice but to give it to them.” (Oh really. Like health insurance. Like lower taxes. Like not bailing out banks. Like not starting wars in the Middle East…)

Superman’s final words are Sagan-esque, “I just wish you could see the Earth the way I see it, cos when you really look at it, it’s just one world.”

When Reeve died in October 2004, all Earth and Krypton broke loose with tribute to him, the posthumous phrase that would bring a tear: “He made people believe a man can fly.” Innumerable cartoonists depicted him as Superman flying away from the wheelchair that defined the final chapter of his life. I quite like the cartoon of the little boy – mirroring the reality of children born into paralysis who knew Reeve only as the champion of their cause rather than the screen icon: 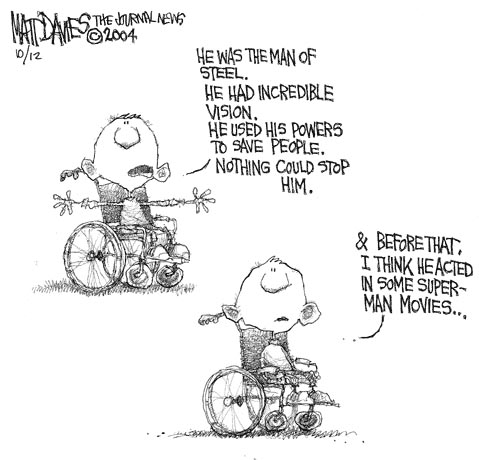 Tragically serendipitous that the man who would be Superman Forever actually lived through an adversity that would serve to prove how super he truly was. 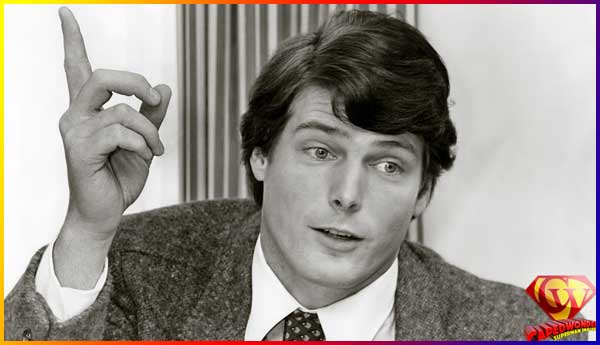