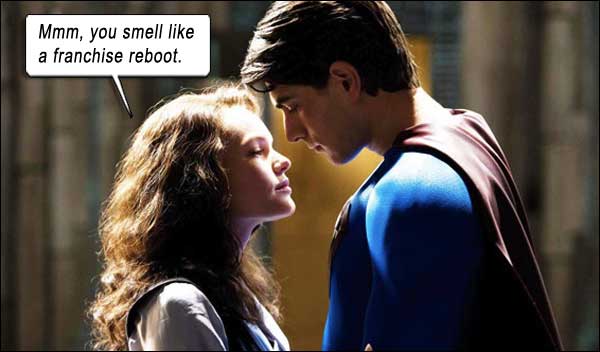 Ol’ Blue Eyes Is Back.

So much strength, so little underpant.

Superman is back. With his underpants hiked low enough to make George Reeves blush the color of cape. In SUPERMAN RETURNS, the blue-clad avenger sports a decidedly European bikini, giving a low-slung nod to the thong-exposed sluts we call modern teenagers. And the color of cape is no longer embarrassment red, but street-cred maroon. And his chest emblem is now three-dimensional (insert joke about Chris Reeve’s acting here).

The Return of Super Poffy

In fact, director Bryan Singer has modified everything about Superman. And changed nothing. Clinging to the Man of Steel mythos like a protective parent, Singer presents merely a retelling of Richard Donner’s 1978 SUPERMAN for the iPod generation, sustaining a few bleeding wounds from walking – and slipping frequently on – that razor’s edge between homage and plagiarism.

1978’s SUPERMAN saw a first act without Superman; a pulse-pounding rescue brought Superman into the public eye – cue montage of heroic deeds; second act swilled over with insufferable romantic interlude whilst Lex Luthor hatched a diabolical scheme to simultaneously kill Superman and rule the world through real estate; third act, Superman fell victim to kryptonite, then literally moved mountains to save the day.

Fast-forward to 2006 and the plot of SUPERMAN RETURNS. See above.

This is the movie’s major pitfall: that with hundreds of thousands of tales in the Superman catalogue, spanning nearly 80 years, 200 million dollars buys us a story 30 years old.

Yet Singer and fellow screenwriters from X2: X-MEN UNITED, Dan Harris and Michael Dougherty, tell that story exceptionally well; of Superman returning to Earth after abandoning it for five years in a futile search for his home world, Krypton. Singer successfully brings back to the silver screen not just “a” hero – but THE hero.

Before Batman (created 1939), The Flash and Green Lantern (1940), and long before Spiderman (1962), Daredevil (1964) and Wolverine (1974), Superman (created 1933) kick-started the Golden Age of Comics (1938-1950s) and was the first true “superhero”; sturdy through the Silver Age (’50s-’70s), never faltering during the Modern Age (’80s to present), Superman will be fighting for the cheese of Truth and Justice long after the American Way is subsumed by more educated and free-thinking nations. 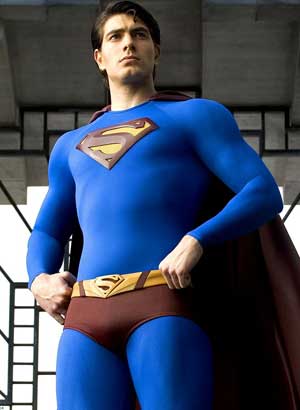 As Jeffrey Hunter became the face of Jesus in KING OF KINGS (1961), Christopher Reeve embodies our modern vision of Superman, so the more you look like Christopher Reeve, the more you look like Superman. And Brandon Routh – replete with wooden facial expression and CG-blue peepers – doesn’t so much put “another” face on Superman (like Dean Cain or Tom Welling) so much as uncannily remind us of THE face of Superman.

But his Clark Kent is as necessary to this movie as trousers are to Superman, lacking even a stranger’s chemistry with Lois Lane, let alone an unrequited lover’s, and we realize in hindsight just how inspired Reeve’s Cary Grant approach was.

RETURNS opens with Brando’s elegy (“They can be a great people, Kal-El…”), often ripping exact lines of dialogue from Donner’s movie (“Statistically speaking, it’s still the safest way to travel,” “When I was sixteen years old, my father said to me- Get out!” “The son becomes the father and the father, the son”), ending with Routh mirroring Reeve’s flying position for the final scene, arms at his sides and glint of a smile to the camera.

Heightening the nostalgia (or déjà vu), RETURNS wisely retains the fanfare motifs of composer John Williams (fittingly augmented by John Ottman), which are as integral to the Superman canon as Chris Reeve.

Blockbuster audiences have grown so conditioned to being force-fed excrement in the form of endless skull-rattling explosions, physically impossible slam-glam stunts and mind-curdling special effects that when a director maturely molds his film into a heartfelt study of loneliness amongst a world of people crying out for you, it is seen as “not delivering” on its blockbuster status. RETURNS, for all its flaws, is deeper than one summer’s rake-in profits, but many may be too impatient to see it as such.

Kate Bosworth (as Lois Lane) lacks the trailer-trash aplomb of Margot Kidder, subsequently any semblance of legitimacy as a hard-nosed journalist. How can we buy her single mother living in sin with her fiancé – dahhling, how 90’s! – when she plays Lois like a woman who only has sex to procreate, and only when her hair is in no danger of being mussed? Even when she puts a cigarette to her lips, we sense the gutless pc watchdogs hanging over this wide-demographic movie’s shoulder, knowing that the chances of her actually lighting that cigarette are as slim as her chances of deducing that Clark Kent and Superman were both absent during the same five-year period. “Investigative reporter” indeed.

She has “moved on” since Superman abandoned Earth (implying that she “had” something with him in the first place – if one drunken night as Margot Kidder in the Fortress of Solitude counts) and is dating Cyclops (James Marsden, that extra from the X-MEN movies), who gives the most heartfelt performance of anyone onscreen, opting not to whine like a petulant boyfriend, rather playing for manly disappointment when he realizes prude Lois – who will only do it with the lights off and her bra on – would readily go trailer trash for a fruity-caped jock with a ram of steel.

Shaved-headed Kevin Spacey fills the scenery-chewing shoes of Lex Luthor, attempting to go deep with his self-aggrandizing as Prometheus (who stole the secrets of the gods for Mankind); yet Prometheus acted on altruism – Luthor just wants to kill Superman. (As deep as a Jacuzzi.)

His quoting Arthur C. Clarke, “Any sufficiently advanced technology is indistinguishable from magic,” is ironic, considering Kryptonian technology seems to be less advanced than the local grocery store’s when it comes to breaking and entering – one would think that the Fortress of Solitude would be attuned only to Kal-El’s presence, but it seems the secrets of Krypton are available to any old criminal mastermind who can afford a husky dog sled and the travel time to the Arctic.

Parker Posey faces her own battle – with a monstrously unattractive hairdo – as Lex’s squeeze; Frank Langella never gets to inhabit his role of editor Perry White, and Sam Huntington‘s Jimmy Olsen gives Clark Kent a run for his vapidness.

Superman’s powers, which he smacks down frequently and astutely, are seamlessly visualized and have never been more inspiring – from his flying scenes (where he regularly breaks the sound barrier or just hovers most convincingly) to his icy breath, heat vision and superspeed, to the grabbing of giant objects in midair. When Reeve would catch a large object, we could sense its suspension cables and knew he was only touching it to make it look like he was lifting it – with Routh, we actually sense each object’s weight and size. And for the first time, a villain actually thinks logically and, finding that machine-gunning Superman’s chest achieves nothing, aims a handgun at Superman’s eye and fires at point-blank range. What transpires is an ingenious and comedic take on being The Man of Steel.

But all this power comes at a price. Characters are interesting for their flaws, not their perfection. Batman’s and Spiderman’s dual identities are more interesting because they repress so much more conflict. Superman’s omnipotence is his shortcoming as a character. We relate to Superman because we want to be him. But we cannot take too much of a character that squeaky clean and all-powerful. (Kryptonite is not a character flaw, but an outside menace.) From what I can tell, Superman’s only flaw is that he’s whipped by a plainish, self-centered, time-keeping librarian-type.

Otherwise, Superman is more god than mortal; a god with fashion sense rivaling the most flamboyant costumes at a gay Mardi Gras, but a god nonetheless.

And like God’s last movie (THE DA VINCI CODE), RETURNS exposes a secret which will rock the foundations of “Chris”-tianity (D’oh! Serves me right for buying that one from Puns ‘R’ Us).

Superman has a descendant! Yes, the Man of Tomorrow’s sperm is so potent that one drunken night with Margot Kidder in SUPERMAN II caused Kate Bosworth to give birth! Lois’ son, Jason (Tristan Lake Leabu), is the guarded secret super snot. Which probably explains why Lois implicitly feels she and Superman are going steady (Psychosis alert!) and why she spends all her time with Clark bitching about Superman (Just Friends alert!) and why she spends all her time with Superman just bitching (High Maintenance alert!). Is there a plausible reason for this man who can have any mate he desires to fixate on this irritating shrike? Or is she merely his Tom Cruise cover? After all, dressing that way is not going to attract women.

Singer piles on the messianic allegory, having characters refer to Superman as a savior and a god; like Jesus, Kal-El is an only son, raised by a surrogate mother, his father an omniscient spirit; like Jesus, he is a white man with brazen-blue eyes who speaks American… and if all the choral music doesn’t tip us to Singer’s attempts at forging a Super-Christ mythos, Superman blatantly dies and is resurrected, after being stabbed by a kryptonite knife in the Spear of Destiny region. In the film, the last words of the Son of Krypton echo the Son of God: “I will always be with you.”

And in the grandest irony of all, with this movie’s release after the 2004 death of Christopher Reeve, in sparking our fond memories of the former Man of Steel, SUPERMAN RETURNS (“Dedicated with Love and Respect to Chris and Dana Reeve”), serves as Reeve’s own resurrection.

In one form or another, Ol’ Blue Eyes is back.