This movie did for Superman what KING OF KINGS did for Jesus – burned an iconic image of a fictional god into world consciousness. 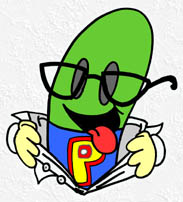 A job for Super Poffy!

And the Word was made Flesh. And the Flesh was Christopher Reeve. So unknown at the time of his casting that he might as well have been from Krypton, Reeve became the Face of Superman for the fortuitous fact that SUPERMAN was arguably the world’s first “serious” superhero movie.

Read “serious” as “money,” with a cast that corroborates this: Marlon Brando, Gene Hackman, Glenn Ford (who, unintentionally, blurts the most hilarious line, “Now wouldn’t that beat all get-out?”), Jackie Cooper, Ned Beatty, Susannah York, Trevor Howard; with a script initially penned by Mario Puzo, hot off THE GODFATHER (1972) and an OMEN-hot director, Richard Donner, this movie began a star-fucking trend which continues to this day – A-Listers unashamedly appearing in what would have been beneath the likes of the Gregory Pecks or the John Waynes in their heyday. And through its success, SUPERMAN was singlehandedly responsible for turning superhero movies into the economic cog they are today.

Leaving no stone of the mythos unturned, the movie follows Superman from his origins as baby Kal-El on his home world of Krypton (sent to Earth by father Jor-El (Brando) before the planet exploded), to his teenage years in Smallville, to his first days in Metropolis as a “mild-mannered reporter” for The Daily Planet and his flirtations with reporter, Lois Lane (Margot Kidder).

Look up “trailer trash” in the dictionary, there’s a picture of Jaime Pressly. In the 70s, it was Margot Kidder. Bringing a much-needed harlotry to what had become either a lesbianic or prissy figure (depending on who was playing her), throaty Kidder does Lois Lane like two beers and cab fare will make her anyone’s for the night. Superman didn’t have to fly her around Metropolis to cultivate her pink panties; he had her at “Statistically speaking, it’s still the safest way to travel.” 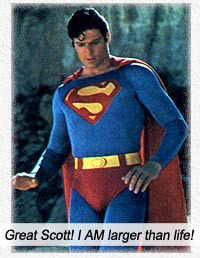 When it’s good, SUPERMAN like its hero, is super. When it’s bad, it is cheesier than a German cheese festival.

The Daily Planet scenes “pop” with snappy dialogue and cheeky nods to the legend; whilst Brando waxes solemn as a heart attack, Hackman as Lex Luthor waxes about as solemn as Groucho Marx; somehow melding his Superman Theme with every motif that had come before, John Williams forges a soundtrack of steel that will survive through generations; and without the bad boy of CGI, Donner and his visual effects mavens make us believe a man can fly…

…On the other hand, there’s Lois Lane’s mile-high poetry-slamming; young Clark (Jeff East) pretending to run alongside a train looking like he’s being hauled along by a winch; Superman’s boy scout dialogue; Brando fancily pronouncing “Krypton” as “Kriptin” like it would kill him to make an “o” sound; and those anachronistic tights and cape – with external underpants – which we crazily still take seriously enough for this movie to gross 300 million dollars. (The feature LOOK, UP IN THE SKY: THE AMAZING STORY OF SUPERMAN (2006) at last reveals why Superman dresses the way he does: because he started as a Hercules-type, his creators (Jerry Siegel and Joe Shuster, 1933) clothed him like a circus strongman – in muscle-hugging tights. The Fact-Stranger-Than-Fiction files will note that this fashion statement remained unchanged over 70 years and informed 99.9 percent of superheroes who came after Superman. Even self-made millionaire he-man, Gene Simmons, admits to swooshing around with a towel tied around his neck whilst watching George Reeves on TV – and note the not-so-subtle accenting of his Dynasty costume: a red cape!)

You’ll believe a man can chroma-key.

When Siegel and Shuster established Superman’s origin tale in 1938 (Action Comics #1), Krypton’s leaders offered no plausible reasons for disagreeing with Jor-El over the planet’s instability. It seemed like they could logically resolve the issue by performing their own studies – but they never did. Being “technologically advanced,” I always wondered why they adopted a petulant attitude rather than a scientific one. Now, living in George W. Bush’s Amerika, their attitudes suddenly attain plausibility, but not through any rationale Siegel and Shuster could have foreseen.

How could two 1930’s teenagers foresee that 2000’s scientists, tyrannized by withheld funding, would be forced to “spin” for the political parties who enable them? Idealists that Siegel and Shuster were – which worked in their favor when creating an embodiment for truth and justice – they could never have conceived how politicians armed with knowledge of planetary instability would simply LIE to the populace for the sake of shortsighted political agenda. My allusion is not only aimed at global warming, for the Bush administration – a government whose unbridled power is infinitely outgunned by its ignorance and stupidity – has jeopardized humanity itself with its rash of transparently wrong decisions. 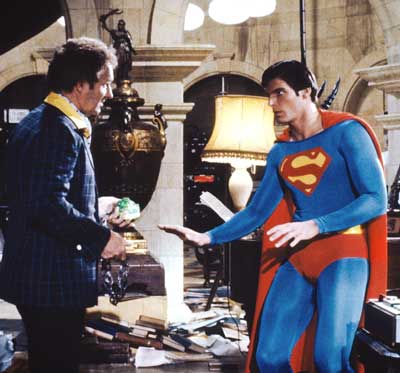 “Now this is how to really rock-a-fella!”

Yet Superman himself, at the other end of the spectrum, has his own shortcomings. As with any protagonist so pure, Superman is the least interesting persona onscreen. Granted, Reeve was no Olivier, but The Man of Wood epithets aimed at him as Superman were not entirely fair, as audiences mistook the simplistic character he plays with his acting ability. It was enough that Reeve, at 6’4″ with baby-blues and pecs like banquet trays – with kiss-curl placed Just So for apple-pie creaminess – embody the physical characteristics of the icon; no one cared for developing Kal-El’s notions of “truth” and “justice” beyond the boy-adventure tousles Superman involved himself in.

In the movies at least, Superman never tackles corruption higher than street level. Yet when his adopted father (Glenn Ford) tells him that he is “here for a reason – and it’s not to score touchdowns,” we’ve got to assume that with such unfathomable powers, that reason should be more compelling than just hindering the lowest rung of the crime ladder, whose crimes are merely manifestations of an infinitely larger social disorder.

The same type of misrepresentation of justice is promulgated by shows like COPS (whose “stars” thrive on puffing out their chests and walking arms akimbo like they’ve got massive lats – the men are even bigger showoffs), the over-dramatic CSI series, or any police drama which makes it seem like police – merely apprehenders of suspected perpetrators – are actually annihilating the cause of crime when in fact they are curtailing those who are least responsible for it.

While nine television Cops bring down one shirtless guy shouting at his neighbor, while Superman subverts three perps stealing less than $100,000, crimes like the infamous Savings and Loan Scandal of the 1980’s (involving, not surprisingly, the criminally-insane George Bush family, none of whom served any time for their involvement in what is regarded as “the largest theft in the history of the world”) go unpunished (or, if punished, penalized at one-tenth the severity of the average “bank robber” because of their “white-collar” nature).

Saving lives is another conundrum that Superman tackles unthinkingly: rescuing Lois from falling to her death is commendable, but while he rescues Fluffy the cat, one thousand kids drop dead in Africa for want of a river being diverted to feed their crops. If he prioritized, Superman could eradicate all hunger and homelessness on Earth, and subsequently a major portion of bottom-rung street crime. But can we blame him for not thinking clearly when his super-jones for harlot kicks in? 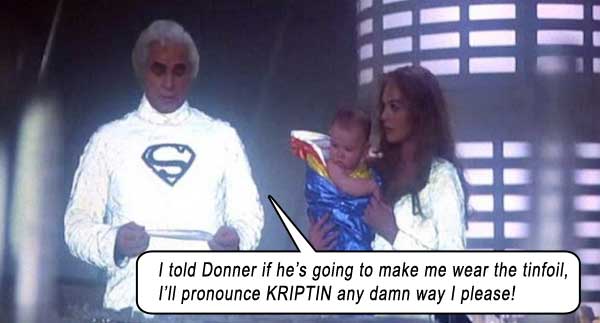 As comics ultimately matured from hoods in hats with one-dimensional motives to burglars who were downsized from their jobs and had to turn to crime to feed their families, audiences grew sophisticated enough to accept that Superman’s nemesis, Lex Luthor, could cause more harm to humanity not by being a “mad scientist” but by assuming the position of the most evil entity on Earth – a CEO behind a glossy desk.

Bringing maturity to Superman, in the ’50s, editor Mort Weisinger established “scientific” hypotheses for Superman’s powers, and was most responsible for the legend as we know it today – the x-ray vision, super hearing, Earth’s yellow sun causing Superman’s strength, etc. In SUPERMAN, there is desperate exposition by Jor-El and Lara to rationally explain the super powers, yet they run aground on the very science they extol. Could it have anything to do with that “science” being created by comicbook writers and cartoonists? Lara says, “He will defy their gravity,” and Jor-El immediately adds, “His dense molecular structure will make him strong.” But with denseness comes more mass, which requires more thrust for flight, which would make it harder for him to “defy their gravity.”

Yet Superman does not fly complying with any physics laws – there is no apparent source of energy being converted to thrust – he seems to fly by force of will (which makes us wonder why George Reeves had to take a running start and boing off a trampoline), so it is pointless trying to explain his powers with physics jargon. For all the sense the explanations make, you might as well say his powers come from wearing his panties on the outside of his tights… 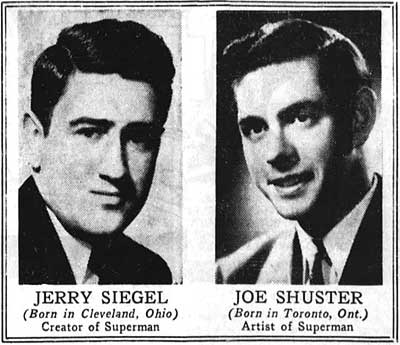 It is a tragic irony that the creators of an icon of truth and justice were themselves victims of a treachery that their hero seemed too ingenuous to identify – corporate greed. After signing away Superman to DC Comics in 1939, Jerry Siegel and Joe Shuster (just two young guys from Cleveland, Ohio, who knew no better) would endure decades of legal strife attempting to gain a respectful slice of what became DC’s most lucrative property. It took the legal wrangling of cartoonist Neal Adams to reinstate the now-customary legend “Superman created by Jerry Siegel and Joe Shuster” and to win the creators their due share of fiscal recompense.

Though Superman’s name was coined from Nietzsche’s ubermensch, Siegel and Shuster’s character lacks the true “strength” postulated by Nietzsche’s “overman,” who was a Darwinian figure, espousing forward momentum of only the strong (in mind and body); the Overman was an amoralist, a survivalist, the meek and mild-mannered having no place in his physically superior and intelligent society. Superman, on the other hand – like Jesus – champions the underdog.

When Siegel and Shuster unleashed their tale of a being sent to Earth from the heavens who takes the sins of the world on his shoulders, it is doubtful they intentionally forged so many parallels between Superman and Christ. But over the decades, as Superman’s chest got bigger and his panties got smaller, innumerable writers, editors, cartoonists and film-makers drew from humanity’s vast pool of mythology (keeping in mind that the Jesus story – virgin birth, miracle cures, crucified savior, etc. – is merely one version of a mythos that existed thousands of years before Jesus himself), with SUPERMAN finally sealing the similarities between the Son of Krypton and the Son of God.

Clark Kent is raised by a single, surrogate mother; his father is spiritual (Jor-El, who omnisciently speaks from beyond the grave through Kryptonian crystals); the three stages of Superman’s life mirror Christ’s – birth, teen angst, and thirty-something; Superman’s full-fledged, formidable powers suffice for the miracles of Jesus, and like Jesus, Superman brings a message of peace – which may seem ironic coming from someone omnipotent who can kill you quicker than thought. (Even if Jesus cannot kill you personally, rest assured, one of his obsessive followers will.) That is the great paradox of “respect” – we are more apt to take advice on pacifism from someone who has the power to kill us if we don’t. (Respect has always been a euphemism for fear.)

Like Jesus, Superman is far advanced in knowledge and power; like Jesus, he won’t shut up about his home in the sky; and like Jesus, his girlfriend is a whore.

“Now wouldn’t that beat all get-out?”