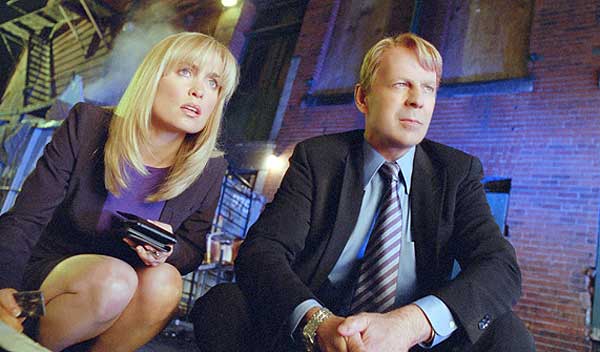 Rage Against The Machines.

Blueprint for a more perfect Poffy

We’d be sending them out as surrogates for our Selves, in humanoid guise, younger and better-looking than our Selves, controlled remotely by us via neural links. Is this not exactly what we are doing right now “virtually” in our myriad online identities?

SURROGATES may still be termed “science fiction,” but only by the barest of margins – and for how much longer? In this Jonathan Mostow thriller (from the graphic novel by Robert Venditti and Brett Weldes, rewritten for the screen by Michael Ferris and James Brancato, TERMINATOR 3), “surrogates” do everything that humans used to do. Surrogates are the ones who venture out into the “real” world while humans are relegated to the virtual, sitting motionless in recliners, blinders over their eyes, atrophying in darkened rooms in front of their computer screens.

Bruce Willis is Detective Tom Greer. When we first meet him we giggle into our atrophied palms at his stunning Swedish platinum blond hairdo. Soon enough, Tom enters a room where his human operator reclines at a virtual control center – a shaved-headed, rugged yet tired-looking Bruce Willis. I ask you, gentlemen, if you had the thunderfist visage of grizzled, steel-eyed avenger Bruce Willis, would you really want to look like a poreless Swedish boytoy?

With his even blonder and sexier partner Peters (Radha Mitchell), Swedish Tom investigates a slew of murders where people have died at their chairs when their surrogates were destroyed. The surrogate manufacturer VSI (Virtual Self Industries) insists that should not be possible. James Cromwell plays the CEO of VSI, a recluse who sends out little boys as surrogates to take meetings with Bruce’s dollyboy.

VSI’s slogan is “Life… Only Better.” A contingent of humans don’t agree, banding together in Humans Only communities, led by The Prophet (Ving Rhames), and rebelling against the surrogates. Signage at the entrance to their community conjures echoes of THE TERMINATOR: “No Machines Allowed.”

And an underground movement within the humans possesses a kind of ray gun that is doing the surrogate-human killings. That’s the plot. McGuffin. The excellence of SURROGATES is its overarching concept.

The unholy marriage of Terminator and Sex Doll.

Tom’s surrogate is destroyed and he has to venture into the real world in the flesh. The robot-themed movie suddenly becomes a fish-out-of-water tale. Years in the dark have made all humans paranoid agoraphobics, and though Tom “acts” like he is scared of crowds and has panic attacks against being touched or broken, he battles against looking too much like toughguy Bruce Willis. Now sitting in a chair all day should make any normal person potbellied, atrophied and slovenly, but luckily Tom’s real world surrogate is The Bruce Willis – the older he gets, the more like a rock he becomes.

And if there’s anything that Bruce Willis CAN’T do, it’s “fragile.” Hell, that’s why he was so convincing in UNBREAKABLE (unlike breakables like David Bowie in THE MAN WHO FELL TO EARTH, for instance). And no matter how much he whined in SIN CITY about being old and weak-hearted, we all laughed at this patently obvious lie. It’s Bruce Willis!

But it doesn’t suddenly become a fist-fest. In this thought-provoking drama, the action scenes are not gratuitous, but organic to the plot and more powerful for their suddenness and infrequency.

Hard on the heels of LIVE FREE OR DIE HARD, Bruce is again warring against technology. In 12 MONKEYS, Bruce was awakened from a chambered slumber, and though he probably should have atrophied in that instance as well, he emerges as tough as… well, as Bruce Willis.

Rosamund Pike plays Tom’s wife, who has not ventured out in years; mortally dependent on her surrogate. The estrangement between Tom and his wife is just one of the disturbing subplots that hits home how powerful a tale SURROGATES is; with more intriguing and complex ramifications and implications than we can cover, on the discomfort and alienation that grows between people who have built up discrete “other selves” as shields against reality.

And I cannot help but see the disturbing parallels with our Real World. We have become our disembodied icons. Watch carefully as you walk down a city street, or in a restaurant or gym – in these public places where humans used to congregate and interact, now the vast majority are connected to electronic devices; people would rather talk to a person on their phone than the person sitting right next to them in a restaurant! 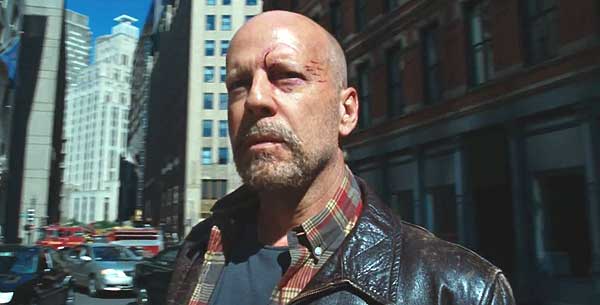 “These people bug me! They really bug me!!”

Online, our surrogates deal with buying, selling, meeting, organizing, chatting, sexing… those impostor selves are out there in the www ether living better lives than we are; Wii and karaoke and amazon and YouTube and thousands of phone apps emulate real world activities to dupe us into relying on our avatars like addictive drugs. The pushback comes in the form of the “green” fad and the manufacturers of sports gear and the live band promoters – marketing that it’s better to GO OUTSIDE. Tragic that ‘going outside’ has degenerated to nothing more than a marketing ploy, which is in turn combated by electronics manufacturers in making everything electronic compact enough to take with you… outside.

The irony is too obvious: we may feel more connected but we are more isolated than ever.

At one point, Tom’s real self tries to cajole his wife’s “surry” into coming out and meeting him in reality, but she just shuts down in front of him. Metaphor and allegory is one thing; being able to literally shut your wife down like that – now that’s something Tom shouldn’t be complaining about!

Tom slash Bruce thunderfists his way to discovering a plot involving the destruction of all surrogates, to force humans into reemerging from their self-imposed home exiles. At first, being the “villain’s” plan, we take it for granted that plot is eeevil — but wait… IS it evil – or the salvation of humankind?…

When all the surrogates drop “dead” in the cities, a radio announcer’s final words, “It appears, at least for now, that we are on our own…” Startling words for a species that is overpopulating the planet. Yet all too true for the aptly-named Twit generation who have entombed themselves in their domiciles erroneously believing they have “friends” because their facebook page tells them so, sitting motionless in recliners, blinders over their eyes, atrophying in darkened rooms in front of computer screens…

On a facebook page, a chick posts an icon of a leopard skin pillow. Next to it: “I just hit you with the Leopard Pillow in Pillow Fight. There is only one rule of Pillow Fight: The player who does not hit back in 2 days loses! Let’s see who wins!” Excuse me, your pathetic life just called. It wants a suicide. Tragedy is: I can imagine other facebookies clamoring to get in on the pillow fight! Probably the only sex they’ll get all year.

Or a chick facebooking to a guy, “Let’s exchange fun smiles on facebook.” If the guy replies, can we safely presume he’s gay?

Here’s a novel idea, ladies – and by “ladies” I mean anyone who participates in facebook frolics – how about we get together and have a REAL pillow fight; how about you smile at me IN PERSON; how about when I poke you, I ACTUALLY POKE YOU?…

You don’t need minimal brainpower to participate in facebook frolics. But it helps.