Edward Scissorhands is all grown up! Never more apparent than when Johnny Depp (as the eponymous demon barber, Sweeney Todd) holds aloft a gleaming razor and boldly affirms in song: “At last! My right arm is complete again!” (My Friends.)

Shave and a Haircut – Uh oh! 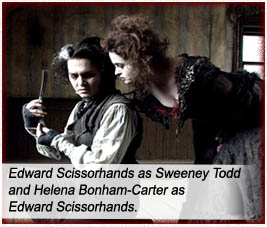 Violent, gruesome, blackly hilarious, deliriously entertaining, director Tim Burton’s vision of SWEENEY TODD: THE DEMON BARBER OF FLEET STREET is a wild cry of bloodlust put to song.The tale of Sweeney Todd is apocryphal at best, but it makes for a grand murderous musical: a naïve London barber, Benjamin Barker (Depp, sans eye-liner) with a wife (Laura Michelle Kelly) and young child, is deported by a lustful judge (Alan Rickman) on false charges, so that the judge could carnalize the barber’s wife and raise the barber’s child to young womanhood (Jayne Wisener), with intent to have carnal relations with her also. After years in exile, the barber returns, wearing more eye-liner than Twisted Sister, more Aquanet than C.C. DeVille, with a new alias, Sweeney Todd. Opening a homicidal barber’s shop above a flagging meat pie shop, owned by Mrs. Lovett (Helena Bonham-Carter, looking more Edward Scissorhands than even Johnny Depp), Sweeney turns the corpses he makes into the pies she bakes; his single-minded goal – to get his deporting Judge in the barber’s chair and give him the closest of shaves (wink bloody wink).

As Sweeney sails into London harbor, he croaks his first pessimistic lines (No Place Like London): “There’s a hole in the world like a great black pit / And it’s filled with people who are filled with shit! / And its morals aren’t worth what a pig can spit…” Then he spends the movie proving it.

The most urgent question asked of this production is: “So can Johnny Depp sing?” Yes, of course he can. So too can everyone else in the cast. A production of this size would not allow less-than-exemplary performances to make the finished cut. What do people expect they’re going to hear? Breaking voices and flat notes? Alan Rickman’s Judge is probably the “Oliver Reed” of the bunch, falling back on the untrained singer’s “talking/singing” technique.

Screenplayed by John Logan, Steven Sondheim’s numbers are edited for Hollywood-movie-length and, though none could be regarded as “classics,” are generally snappy enough to move the story along briskly; the only reprise that garnered repose being Johanna, the daughter’s theme – every time someone started puling “Johaaaaana!” my eyelids grew heavy.

Sacha Baron Cohen – back after BORAT – slam-dunks his hilarious cameo to the canvas as a rival barber, Signor Adolfo Pirelli, who unwittingly exposes Sweeney’s barbering talents in public, whereupon the Judge’s liege, Beadle Bamford (deliciously lecherous Timothy Spall), books a shave for the judge at Sweeney’s new establishment. Narrowly missing his throat-cutting opportunity with the Judge, Sweeney falls into insanity, installing a tilt-a-chair that drops his arterially-spurting victims down a chute and onto their heads – hard – in the concrete basement of Mrs. Lovett’s Pie Shoppe.

Mrs. Lovett only has raccoon eyes for Sweeney, who only has sunken eyes for his razors and there is a smart overlapping of vocals where they are both singing the same line, her to him, and him to his razors in My Friends: “Come let me hold you / Now, with a sigh, you grow warm in my hand / My friend! / My clever friend…”

Another smart double-vocal is when the Judge is in the chair and sharing thoughts with Sweeney over Pretty Women: though they sing the words in unison, Sweeney is remembering his lost wife, while the Judge is perversely thinking of his underage charge and Sweeney’s daughter, Johanna. “Sitting in the window or / Standing on the stair / Something in them cheers the air. / Pretty women.”

In a surprising turn of fortune, the more Mrs. Lovett grinds and bakes Sweeney’s unfortunate customers into her meat pies, the more successful the pie shop becomes. Still, her grinding machine could do a better job, as their young apprentice finds fingers and feet aplenty garnishing the upper crust of his pastry. Nonetheless, I must admit that seeing the grand meat pie again (a novelty food indigenous to British and Australian shores) made me hanker for one, no matter what flesh was ground into it!

It was pleasantly surprising to see that Burton never stayed his hand when it came to brutality. SWEENEY earns its R rating decisively, with many a spurting carotid being accompanied by joyous song. All set in visual tones cartoonishly gloomy (production design by Dante Ferretti), unnaturally leached of all color except blood-red, with ornately gutter set design (by Francesca Lo Schiavo) and churling cinematography (by DP, Dariusz Wolski) impeccably screaming Burton’s auteur hand.

There is a subplot of a young sailor (Jamie Campbell Bower) rescuing Johanna from the clutches of the Judge, and there are tale twists where we hold our breath that Sweeney is going to do something regretful – and parts where Sweeney DOES in fact do something regretful – all winding to an inevitable climax that merely proves the philosophy of both protagonists in the story, Judge and Sweeney alike: that all men have done something in their lives for which they deserve to die.

“There’s a hole in the world like a great black pit / And it’s filled with people who are filled with shit!”