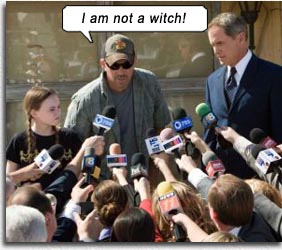 Plot of SWING VOTE is stupider than a session of the United States Congress: in a presidential election, citizen Bud Johnson (Kevin Costner) misses his last voting day, so his young daughter (Madeline Carroll) fraudulently casts what she believes to be his vote, but the electronic voting booth malfunctions, and due to the two candidates being in a dead heat, the voting committee comes calling on Bud to re-cast his vote.

Where do we start counting the insults to our intelligence?

• Two candidates in a dead heat, in a country of over 160 million registered voters. That in itself should be a movie. What are the odds – eleventy-kazillion to one?
• The filmmakers are counting on the blockheaded public knowing absolutely nothing about the Electoral College and how voting districts are grouped and awarded to candidates, rather than counting single votes.
• Movie would have us believe that if a voting machine malfunctioned, the people in charge of that district wouldn’t just say “fuck it!” and award the vote arbitrarily.
• If the filmmakers actually believe One Man One Vote, see above re. Electoral College.
• The president himself and the challenger spend inordinate amounts of money to bribe Bud Johnson for his vote, as if he was a corporation or a lobbyist or something. And there is not the slightest implication that their malfeasance is unethical, let alone illegal.

On and on the insults go. An endless litany of ignorance and juvenile plot points predicated on the presumed ignorance of the viewing audience.

In a stupid irony, Costner’s name is Earnest “Bud” Johnson. Royt… When his precocious daughter owns up to her fraudulent actions and asks, “How are we gonna get out of this?” – referring to the voting committee sniffing around and probably discovering the truth – father Bud assures her, “We lie!” Excellent! Two wrongs DO make a right in American politics.

Kelsey Grammer is Republican President Boone, who takes Bud onboard Air Force One and shows him The Football (aka “The Button”), reminding Bud of the importance of keeping a warmongering Republican’s finger on said Button.

Boone’s Democratic challenger is Donald Greenleaf (none other than the world’s oldest true hippie, EASY RIDER Dennis Hopper! It seems an obvious casting choice, but though Hopper fits the liberal mindset perfectly, it came as a shock to discover that after a lifetime of hippie liberal roles, Hopper is actually a lifelong Republican! In his own words, he “voted for Bush, father and son” and came to his senses late in life by voting for Barack Obama).

Kevin Costner has gone from playing a man who investigated John F. Kennedy’s assassination (JFK, 1991), to Kennedy’s aide (THIRTEEN DAYS, 2000), to this Everyman sap who wouldn’t know a policy position if it bit him on his drunken, irresponsible, lazy, rasslin’-lovin’, NASCAR-redneck ass. And he’s in a Willie Nelson tribute band! So the fate of the Free World is in the hands of a blockhead? As usual.

But fret not! Being a Disney movie (Touchstone), the kid is smarter than her father and convinces him to “care enough to vote.” Of course, if you really do become politically aware, you’d know that one vote doesn’t actually count. You’d know about the myriad ways votes are defrauded, discarded, misallocated and wrongfully attributed, and that this dead heat situation is safeguarded against by every honest and dishonest means legally and illegally available. In other words, you’d know better than to cast your useless vote for any politician only concerned with keeping his job, not saving yours.

MSNBC political commentator Chris Matthews rears his moonface, and CNN’s Campbell Brown makes a sensuous anchor appearance, but most of the “news” coverage is from Fox News. No surprise, as bullshit is their bread and buttah.

If only every presidential candidate would go to all this trouble to do something HONEST, instead of despicable (which is what they spend all their time doing every single minute of every single day).

Many familiar faces, demeaning themselves and the American Film Industry by appearing in the film: Stanley Tucci, George Lopez, Nathan Lane, Judge Reinhold…

So who does Bud vote for? Who cares?! As SOUTH PARK told us, it’s simply a choice between a douche and a turd. And that’s no choice at all.

For low information voters only.