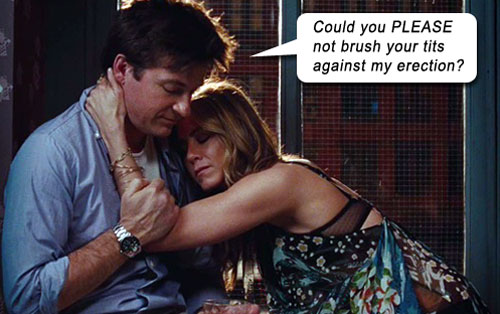 Like taking a shot in the mouth and not having anywhere to spit.

It’s about a woman craving a baby. And 90% of the men have left the room… Let’s try for the other 10%: It’s about Just Friends, with Her asking Him to help her find some semen. Are there any men left watching this at all?

THE SWITCH is a 2010 romantic comedy– wait, it’s 2010 and they’re still making romantic comedies? And still making them this godawful stupid? Get a load of this plot (oooh, don’t say load…): Kassie (Jennifer Aniston) has left her sperm donor’s semen in her private bathroom during her “impregnation party” (–holy shit! I want to get up and walk out again…). Her BFF Wally (Jason Bateman) accidentally spills the semen. Rather than tell Kassie (who spent months scouting spunk donors for the best characteristics), he desperately refills the cup with his own jizz. So Kassie’s kid enema – unbeknownst to her – is going to be Wally’s kid!

Great plot, huh? Especially that part where Wally goes into the bathroom during Kassie’s impregnation party, finds the waiting semen in a cup (one of those transparent plastic containers you pee in) – and unscrews the cap to take a close look at it! What kind of Man would do this? Oh, that’s right, he’s not a Man – he’s a Just Friend. (And also: his name is Wally (!) How appropriate: a wally named Wally.)

It’s sad to see the lovable Jason Bateman wasting his easygoing style and talent in a stinkaballoo like this; Aniston, we expect this from. She has this Perky Vomity set-and-forget character on speed-dial, (.i.e. phoning it in) and brings ab-so-fucking-lute-ly nothing to this role. While Bateman speed-dials Nerdy Douche into the mix, who wears vests to impregnation parties.

Jeff Goldblum is Wally’s best friend and confidante, also speed-dialing it in, playing the exact same playboy role he did in NINE MONTHS – the Man who tells it like it is about relationships, “You shared too much too soon – quickest way to kill a romance,” which no women will believe, but which all men know is truth.

Juliette Lewis as Kassie’s hooker-lookin’ best friend with the big mouth, because every romantic comedy needs one, right?

Bright-eyed Patrick Wilson is the anonymous sperm donor, Roland the Viking, whom Kassie locates after the birth because that’s just how women are. And it thickens the splooge– I mean, plot.

Question One: Why didn’t Perky ask Nerdy for his sperm? Because he’s a Just Friend, ergo: impotent, sterile, useless. But he’s not a Just Friend. Realistically, because there’s no such thing. And technically – because by the end of the movie he put that Nerdy dorknozzle to use and pumped Perky!

We know going in that the movie is about pairing the two leads blah blah ho hum yawn. We know this in the first second of the movie. Hell, we knew it during the trailer. Thus… how could Nerdy be a Just Friend. He was cultivating Perky throughout their time together – inadvertently, incorrectly and like a pussy, but cultivating her nonetheless. Just Friend presumes both the people in the Just Friend relationship never bang each other and – here’s the clincher – never even have the intention to bang. But if this movie – and every other movie that features Just Friends who pair off by movie’s end – leads to sex, it means they were never Just Friends but simply two people who hadn’t banged yet; cultivating each other for sex, doing the mating dance like bower birds, instinctually checking the other’s mating and parental potential, metaphorically sniffing each others’ arses.

Now here’s a shot to the face: Nerdy narrates. What in the hell does a generic pap soporific comedy need narration for? To put us even more to sleep?

Madonna’s Papa Don’t Preach is rolled out, with its nefarious line, “…but I’ve made up my mind – I’m keeping my baby.” Like, whatever. Who’s stopping you? Why even tell us this? Look, no one minds you want a baby; no one minds if you’re happy about it – but stop all this “woman-empowering” rhetoric that goes with it. Having a baby is the reason you’re alive – to continue your genetic code and propagate your species; there’s nothing empowering about it and it’s certainly not a “miracle” by any means if every single organism on the planet is doing it every few seconds.

So Perky births Nerdy’s kid and the movie drives itself toward revelation of that fact and all its requisite betrayal, denial, non-human reactions and forced explanations… these poor actors have to try and convey this dung dialogue like it really matters… Production values might be excellent and modern, but in its own genre, SWITCH retains the same level of pointlessness and stupidity that makes it almost as good as GAMERA VS. GUIRON.

My last question: How did Kassie’s kid Sebastian (young precocious Thomas Robinson) ever get so smart and inquisitive living with an incurious doofus like Perky?

Evolution has not budged one jot when it comes to the cavemen who think this dog poo is worth budgeting when people are still dying of cancer. (A coincidence, as the two directors of SWITCH, Josh Gordon and Will Speck, attempting current comedy with this dated genre, also helmed the ill-fated CAVEMEN TV series (2007) based on the Geico Cavemen.) Let’s not even go as far as cancer – let’s cure the common frickin cold before putting one more wretched cent into the next romantic comedy with Jennifer Aniston.

Recommendation: SWITCH this comedy with THE OTHER GUYS.