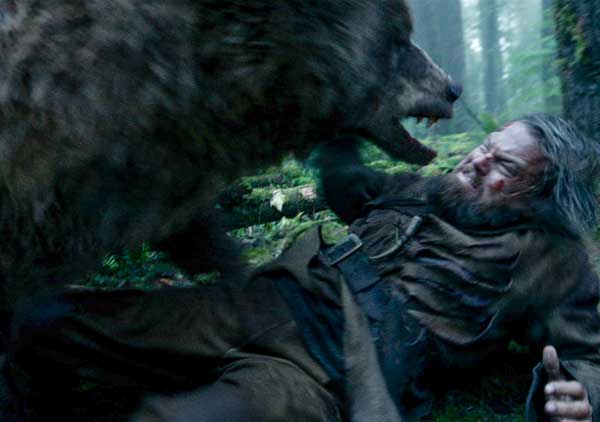 Revenge served cooooold… Think of the coldest pain you’ve ever felt. The most painful cold, biting into your delicate earlobes, torturing your dead toes, eating into your fingers; no feeling, no hope, no vestige of pumping blood. Now multiply it by Leonardo DiCaprio in a bear rug. In the stark survivalist thriller THE REVENANT, Leo is tracker Hugh Glass, a … END_OF_DOCUMENT_TOKEN_TO_BE_REPLACED

Flocking dork and deceitful bitch road trip. Jesse Eisenberg has two speeds: superdork nebbish and fast-taking schemer. In RIO 2, he’s phoning it in as the former. Eisenberg returns as rare macaw parrot Blu, who is now married to his parrot love interest from RIO, Jewel (voice of Anne Hathaway), so there is a noticeable lack of the romantic frisson … END_OF_DOCUMENT_TOKEN_TO_BE_REPLACED

Ridiculous is as Ridiculous does… It’s Sandler versus Tarantino in a battle of the adjectives. SPOILER ALERT: Tarantino wins. So you’re going to call your movie THE RIDICULOUS 6? An unsubtle spoof of the title of Quentin Tarantino’s upcoming humbucker, THE HATEFUL 8. In what universe are audiences unaware of this? It’s not even a spoof on the Tarantino movie … END_OF_DOCUMENT_TOKEN_TO_BE_REPLACED

And I Ran, Iran so far a-way. And Iran, I could-n’t get a-way… Boy, Iran sure can learn a thing or two about torture from America! Jon Stewart (THE DAILY SHOW) directs ROSEWATER, a stark recounting of the kidnapping, torture and release of Iranian-Canadian journalist Maziar Bahari in 2009. There never needs to be any reason behind political kidnapping and … END_OF_DOCUMENT_TOKEN_TO_BE_REPLACED

Being more Man than Machine? There’s an app for that… A cop transformed into a cyborg fights for control of his free will over the corporation that controls his unthinking, emotionless mind. Uh, so it’s about ALL cops then? No, only ones who behave like ROBOCOP. Oh, so it’s about ALL cops then?… 2028 Detroit. When Alex Murphy (Joel Kinnaman) … END_OF_DOCUMENT_TOKEN_TO_BE_REPLACED

Red Film over White Eyes. …and they weren’t even Indians. We called them that by accident – and we still call them that! Like, we knew in a month that it wasn’t “Indians” – but we just don’t give a shit. We never correct it!… — Louie C.K., LIVE AT THE BEACON THEATER, 2011. Cree filmmaker Neil Diamond dismounts the … END_OF_DOCUMENT_TOKEN_TO_BE_REPLACED

I’m looking through you, You’re not the same. A fun retelling/revisiting the legend of The Rutles and their trousers. THE RUTLES 2: CAN’T BUY ME LUNCH is pieced together from outtakes of THE RUTLES (1978) and new talking head footage compiled by Eric Idle. And it shows. Playing his same Interviewer character from the previous film 26 years ago, a … END_OF_DOCUMENT_TOKEN_TO_BE_REPLACED

The Ballad of Eric and Innes. Better than wishing for the Beatles to reform, better than any Beatles tribute band, and definitely better than Jesus, Eric Idle‘s THE RUTLES is a brilliant, hilarious, underappreciated pastiche of the rise and fall of The Beatles. Written and co-directed by Idle (of Monty Python) and starring Idle as a roving reporter and as … END_OF_DOCUMENT_TOKEN_TO_BE_REPLACED

Bad Moviemakers Strike Again. There’s not much “revenge” in REVENGE OF THE CREATURE, except maybe the filmmakers’ revenge on clear-thinking movie viewers. Scientists led by John Agar capture the CREATURE FROM THE BLACK LAGOON and bring him to civilization to “train” him. And kill him. Called the “Gill Man” by the tourists and sightseers that call themselves “scientists,” the creature … END_OF_DOCUMENT_TOKEN_TO_BE_REPLACED

Apoca-Lips and a great rack. It’s The Apocalypse, and everything is pretty much the same… except the Anti-Christ is Walking The Earth and trying to get off with your girlfriend. RAPTURE-PALOOZA is atheistic, irreverent and very funny, with just the right amount of C-cup. Just the way I like it. For those irreligious and sensible enough not to know what … END_OF_DOCUMENT_TOKEN_TO_BE_REPLACED

Godzilla with wings. Prehistoric Pteranodon destroys Japanese city. Military weapons have no effect on it. Burying it under a volcano works though. Such is the prosaic plot behind RODAN, a Japanese monster movie made while Godzilla wasn’t looking. The movie itself has its strong points, due to the talent involved – literally, the full team that brought us the original … END_OF_DOCUMENT_TOKEN_TO_BE_REPLACED

Crock of Ages. My flesh was crawling so vividly during every minute of the mindless, sanitized, second-rate karaoke movie ROCK OF AGES that by the time it ended I was sitting in one seat and my flesh was four seats over. I would sincerely like to kick this movie to death. This whole concept is a MISTAKE. From the Broadway … END_OF_DOCUMENT_TOKEN_TO_BE_REPLACED

REVIEW in need of review (of its soon-to-be lost financing, soon-to-be fired employees and cancellation policies). I wonder if Andrew Daly realizes he is as funny as a dick rash. Thankfully, his new TV series, REVIEW, is as painfully devoid of humor as he is, and will be gone long before my dick rash. Daly plays a “life reviewer” – … END_OF_DOCUMENT_TOKEN_TO_BE_REPLACED

Rio de Generic. Named RIO, one would expect a flashy, exuberant, carnivale dance-a-vale rainbow spectacle. One would be wrong. Rather, an uninvolving tale of a rare blue macaw and his intended mate on the run from poachers, while his owner and her soon-to-be mate try to track them down. Cue seen-it-a-million-times face. Jesse Eisenberg voices Blu the parrot, abandoned at … END_OF_DOCUMENT_TOKEN_TO_BE_REPLACED

Bigger, Blacker, Badder and Drunker. Was Richard Pryor the first Black Comedian? Yes, there was Cosby before him, but Bill Cosby – even though technically a black man – was a white comedian. Prior to Eddie, Martin, Morgan, Sinbad, Tucker, Rock – there was Pryor. RICHARD PRYOR: OMIT THE LOGIC is a 2013 retrospective of the hard life and harder … END_OF_DOCUMENT_TOKEN_TO_BE_REPLACED

Horror Movie Handbook meets Callous Director. Another good scientific story sacrificed to Hollywood’s Lowest Common Denom. THE RELIC finds a field researcher dabbling in tribal drugs on the dark continent shipping a crate containing a strange fungus back to his lab at the Chicago Natural History Museum. Also in the crate is a relic of an ancient god that could … END_OF_DOCUMENT_TOKEN_TO_BE_REPLACED

Steel with Real Feel. I can’t tell if this is massively retarded, or ultra cool. wtf. –YouTube comment. I’m going to officially declare this movie hella enjoyable. It may not be the Oscar-muncher of the year, but it’s definitely the most fun. And is it coincidence or mild irony that Wolverine is the star of a movie called REAL STEEL? … END_OF_DOCUMENT_TOKEN_TO_BE_REPLACED