Superman in a bra. Thighs shaved smoother than a cucumber. Cupid-bow lips. Armored breast. Screenings for Lesbians Only. The first ever feature film for the DC superhero WONDER WOMAN has already caused its fare share of controversy and orgasm. It seems as if critics are only lauding this Patty Jenkins-directed film for fear of retribution from the female gender, and … END_OF_DOCUMENT_TOKEN_TO_BE_REPLACED

300: Rise of the Swoll. As Zack Snyder’s 300 covered the thrilling land battle of Sparta against Persia, Noam Murro’s 300: RISE OF AN EMPIRE covers the concurrent sea battle. The boring sea battle. Oh, it still looks amazing, with the same ochre tint and album-cover pizzazz as Snyder’s epic, with that same filmic technique that lovingly embraces the crystalline … END_OF_DOCUMENT_TOKEN_TO_BE_REPLACED 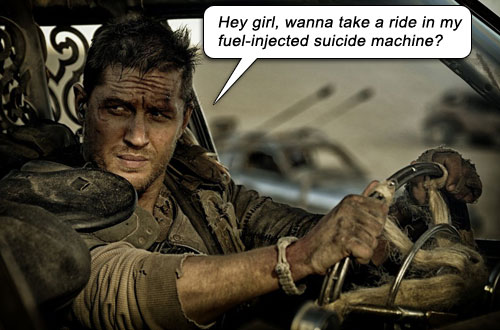 Car Chase as Metaphor for a Brave Mad World. We’ve been promised this movie for over a decade; since Mel Gibson was not a Nazi and still looked good in hot pants. Was it worth the wait? Hells to the exploding musclecar yes! MAD MAX: FURY ROAD is a ballet of fiery incandescence, a violent visual poem of psycho-licious demolition … END_OF_DOCUMENT_TOKEN_TO_BE_REPLACED