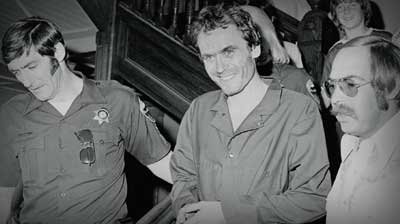 Extremely Wickedly Good. CONVERSATIONS WITH A KILLER: THE TED BUNDY TAPES is a well-produced documentary about the serial killer who was as pretty as the asses of the 20-year-old girls he sunk his teeth into. Too soon?… BUNDY TAPES wins on every level, because it is just that! Ted Bundy – the psychopath himself – speaking on cassette recordings made … END_OF_DOCUMENT_TOKEN_TO_BE_REPLACED

Extremely Ripped, Shockingly Misguided and Pointless. EXTREMELY WICKED, SHOCKINGLY EVIL AND VILE follows a short period in serial murderer Ted Bundy’s life, as told exclusively from his naïve girlfriend’s point of view. Meaning it tells us nothing. And the movie follows that old gambit of casting a lovable star in the role of a heinous human being (a la Brolin … END_OF_DOCUMENT_TOKEN_TO_BE_REPLACED