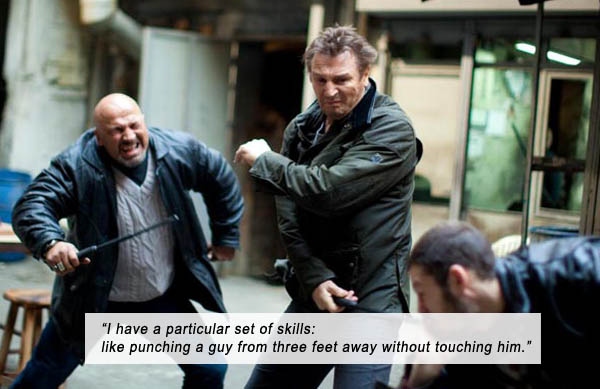 Great KEY & PEELE sketch where two valets who are action movie fanatics drool maniacally in their frenetic praises of Liam Neeson, calling him ‘Liam Neesons’ in TAKEN and TAKEN 2 (which they call TOOKEN and TOOKEN 2), their heads eventually exploding in fervor over Neesons and their other boy ‘Bruce Willy.’

So here we are at TOOKEN 2. I can’t think of it as anything else now. 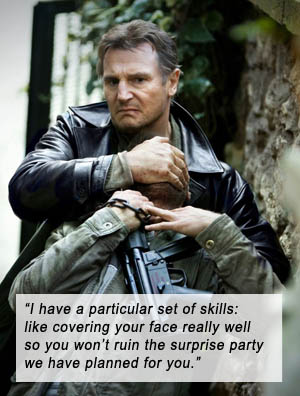 For the first time in a hard adult actioner, we see actual repercussions in killing bad guys. As retired CIA operative Bryan Mills, Neeson tore through a cavalcade of Persians, Albanians and other ambiguous Middle Easterners in TAKEN, with his “particular set of skills,” and as usual, the audience takes it for granted ‘bad guys dead = end of story.’ But TAKEN 2– I mean, TOOKEN 2, opens with the funerals for all those bad guys; presiding over the mourning, their sinister patriarch Rade Sherbedgia, vowing vengeance. We consider Mills’s past deeds heroic – Key & Peele’s two valets will vouch their lives on it – but the Albanians consider his deeds Sins Against The Family…

The most disbelief you will ever be called upon to suspend, as Bryan Mills plans a vacation for his family (sensually grateful wife Famke Janssen and bland ungrateful recovered daughter Maggie Grace) – in Istanbul [needle scratch]. Yes, the region from whence all those assassins and kidnappers hail. No sooner has he extracted his daughter from that Middle Eastern cabal of forced-whore slave-traders, Mills is taking her back (sorry, tooking her back) into the belly of the beast. (He’s been watching too many of those movies where you kill the bad guys with no repercussions.)

Is HE the one whom the title is referring to? In other words, Mills’s family wasn’t Taken again by bad guys – but Taken by Mills himself!

Consequently, movie reminds us of the venal business practice of THE HANGOVER PART 2: Copy and paste. Change slug line from EXT. FRANCE to EXT. ISTANBUL. Presto! Sequel! Funding! Directed by the aptly named Olivier Megaton, it’s now his job to present the same old shit without making it look like the same old shit.

Well, the tension is high during the kidnapping scenes– sorry, the tooken scenes, as Mills and his wife are tracked by Rade’s assassins, bound, gagged, and shoved into a basement. Then TOOKEN veers off the rails, as these blood-vengeance assassins, despite their recent oath to just kill him kill him kill him courteously allow Mills to stay alive and visit a teeny tiny slit on his wife’s throat to let him know They Means Bizness. Although their business is immediately brought into question when they don’t search Mills for weapons, thereby courteously allowing him the use of his hidden cellphone when the kidnappers of course retire to another room to play cards, tying Mills to a rusty pipe with one small rope around his wrists, and not leave anyone to stand guard over him.

So Mills calls his hyperventilating daughter and gauges the location of his subterranean prison by making her throw grenades off rooftops and listening for the direction of the explosions. Pity the fools standing anywhere near the arbitrary grenades lobbed by the white Westerner’s daughter. Later, she does some pretty impressive stunt driving for someone who cannot drive a stick who just got her license… 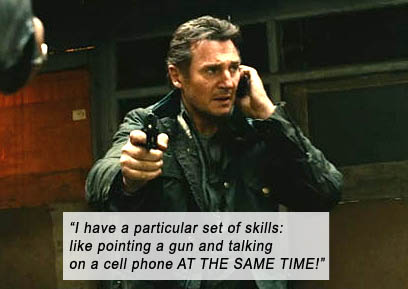 And the rest of the movie, crammed as it is with Liam-Kwon-Do, would have been more enjoyable if director Megaton had not handed off all the action sequences to seven monkeys with cameras. It is truly as if we have not seen the full movie; as if there is something blocking our view of the screen – but it’s simply the horrible camerawork which is itself an obstacle to actually seeing the scene properly!

Neeson – excuse me, “Neesons” – is, as usual, magnificent. When his daughter says the word “boyfriend” the subtle way his face just drops tells us everything.

Blandness, thy name is Maggie Grace. I bet she’s unaware there’s anything other than missionary position with the lights off. As Mills’s daughter, her role is more integral here than just being kidnapped and playing stoned Valley Girl (n.b. lobbing grenades off rooftops and presumably killing innumerable unseen kids and ponies is a leap in the entirely wrong direction), and it’s as if she either didn’t act in the last movie (if you call that acting), or she’s suffering PTSD and has subsumed the details of her traumatic adventure. When she finds out Mills has put a GPS in her cellphone to locate her at the bf’s place, she screams at him, “Why would you do that?!” Oh, let me think: because I had to Liam-Kwon-Do through the entire underground Euro prostitution network to rescue you from Albanian flesh-peddlers?! How’s that for a start? The phrase ‘arguing with dad’ should not even be in that arrogant c-word’s vocabulary for the rest of her insipid life!

Famke gets to do nothing except be damsel in distress. And most of that time, she’s unconscious. Good work if you can get it.

That’s what they get for messing with Neesons!

Telltale signs of American demographic:
Though TAKEN 2 is made by Europeans, they have correctly identified what puts American butts on seats, aping the American ethos seamlessly:

1) Qualification of intelligence: When Mills is telling his daughter about the conquests of Istanbul, she asks, “How do you know this stuff?” Mills: “I read it in a book on the way over.” Really? He couldn’t just have general knowledge from his world travels? American movies always qualify knowledge or intelligence with a boneheaded “explanation.”

3) During a car chase, a car flips over.

4) No liability, no ramifications, no remorse or psychological trauma for the White American Femme throwing grenades off rooftops in this foreign country. They don’t even show where the grenades land, or how much property damage they’re doing or who or what they’re blowing up; hey, it’s a foreign country, which technically means it doesn’t exist unless Americans are in it or are at war with it.