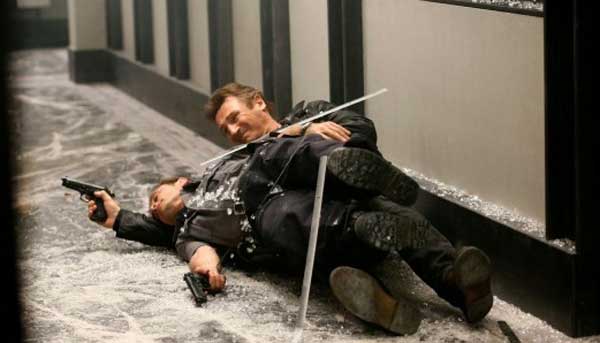 Taken roughly from behind.

Someone should’ve TAKEN the director’s place.

His wife is murdered. And his daughter doesn’t like the giant bear he bought for her birthday. For Liam Neeson, TAKEN 3 is just one tragedy after another. But not with his wife and daughter – with the director. It’s official: Olivier Megaton is the WORST ACTION DIRECTOR in history. He has no clue how to direct action. None.

Megaton directs a script from Luc Besson and Robert Mark Kamen, which is riddled with plot holes and plot conveniences to begin with, but as soon as the Liam-Kwon-Do starts, Megaton hands the director’s chair to the same seven monkeys he used in TAKEN 2.

Neeson is once again retired covert operative Bryan Mills, father to 20-year-old Kim (Maggie Grace), whom he can’t connect with, and ex-husband to Lenore (Famke Janssen), who he’s just about to connect with due to her marriage being shaky – before she’s killed for mysterious reasons. Bryan’s three ex-Special Forces pals (led by Leland Orser), whose hardest mission these days has been to swat a little white ball into a tiny hole, are called in to help him catch Lenore’s killer.

The female characters in this film have nothing to do. So they make Kim pregnant and kill Lenore. The murder is a device to push the plot and the pregnancy has nothing to do with anything. The film has no connection with its first two entries (not even the same characters – as they’ve swapped out vanilla Xander Berkeley as Lenore’s husband, for shady Dougray Scott, who can’t pick an accent and stick with it). The slogan, “It ends here” implies that the Euro mobs Bryan terrorized in TAKEN and TAKEN 2 might be back for revenge, but this is a stand-alone film with no connection to Europe, kidnapping, or quality filmmaking.

When Bryan gets a text from shaky-marriage Lenore, for “bagels” at his place, he stupidly actually buys bagels on the way home, instead of burning rubber and unzipping his pants while driving, to save on undressing time. A few rock hard driving minutes later, Bryan finds Lenore dead on his bed. Throat: slashed. (My mind keeps going back to SIX DEGREES OF SEPARATION; the way Donald Sutherland would melodramatically callback, “We could’ve been killed! Throat: slashed!”)

Conveniently, the police walk in on Bryan and think he did it. Luckily he was white, so they didn’t shoot him. He beats them up and flees. Because when you’re covert ops you can do that. Forest Whitaker is called in to head the FBI hunt for Mills. (Whitaker plays the same role in Arnold’s THE LAST STAND – seemingly removed from the actual movie, always turning up too late, never coming face to face with his quarry until the last scene).

TAKEN 3 is one of those movies where so much hassle could be avoided if characters would just communicate simple information. Two FBI agents catch up to Bryan watching a security video showing his wife being snatched – it’s on the screen – yet he never just says, “Look at my wife being – ahem – taken! These are the killers!” Even if he wants to catch the killers himself, at least he’d get the feds off his back – one less group of people to keep beating up.

Neeson is 62, and it’s amazing how this Northern Irish actor has unassumingly taken the place of the slightly younger Bruce Willis as American Action Hero! His stunt guy corroborates that he does most of his fight scenes himself!

Bryan is arrested, and has to beat up two cops to escape in a flamboyant car chase. Because when you’re covert ops, you can do that. Filmmakers pander to American audiences by flipping a car over during the car chase. Not only does the thing flip over, it does a triple-swan with a difficulty rating of 8. Adds so much credibility to this film…

Bryan must figure the connections between Lenore’s shady ex-husband, the Russian mob, and why the director has to shake the camera so much when he’s beating people up.

When he launches his assault on the Russian HQ, Bryan’s special forces guys assist, with Leland Orser manning an undercover rape-van loaded with computers that can override the security systems of the building, work the elevators, scan for cops, radar for love and land the Space Shuttle. Because when you’re covert ops you can do that.

Then Bryan’s daughter gets TAKEN. Hooray, we have the movie title! At least he doesn’t have to go to Istanbul to get her back. He can blow up a few streets right here in sunny LA and no one will send him a bill. Because when you’re covert ops you can do that.

Lesson learned: Never buy a giant bear for your daughter or your wife will die.