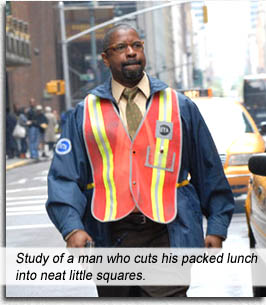 Brian Helgeland screenwrites and Tony Scott (TOP GUN, TRUE ROMANCE, MAN ON FIRE) directs this remake of the 1974 film of the same name, THE TAKING OF PELHAM 1 2 3, from the book by John Godey.

In the original (starring Walter Matthau), the gang members used code names Mr. Brown, Mr. Green, Mr. Blue, etc. Tarantino never got called a copycat for using this exact naming of his thieves in RESERVOIR DOGS (1992), yet these color epithets have now become so associated with Tarantino’s breakout cultie that to use them even in this remake would, ironically, make PELHAM look like it was copycatting – Tarantino!

And director Scott goes one better on the gang members – by casting actual gang members! Having real hardcore Albanian mafia as his gang (Victor Gojcaj and Robert Vataj), we sympathize with Travolta for interacting with them as if from a ten foot pole. In the original PELHAM, Robert Shaw ruled his gang with an iron fist, condescendingly barking orders, shooting those who disobeyed him or staring them down with his British accent, but no way was babyface Travolta gonna treat his young thugs with the same disrespect – no matter how many fake jail tattoos he sported. He says maybe two words to them, just letting them go hellspit shooting up the carriages, killing an undercover cop, manhandling people, and when they part ways after the heist, he simply shakes one of their hands. Then he’s breathing a sigh of relief into Kelly Preston’s awesome augs that night…

Despite that haziness over his co-stars, Travolta has really crept into the mind of that bad guy he tried so hard to convey in John Woo’s cheesy BROKEN ARROW. And Denzel never once pulls out his star quality; he is heart and soul the broken ex-motorman he is playing, caught in the wrong place (dispatching Pelham station) at the wrong time (1:23 p.m.).

Since the filming of PELHAM 1974, technology has run rampant, so taking a subway train hostage would not only be impossible in this age, but also very very stupid. So this PELHAM necessarily had to build in updated elements: online chatting, cell phones, computer graphic readouts, digital security measures.

Ryder has a computer with him, constantly checking stock prices, even during his tirades. And the heist is not the simple money game it originally was in 1974. Ryder asks for a ransom of ten million in cash but that is a diversion – he is playing on the much larger canvas of the stock market, that fluctuates with every event that impacts the evening news, in this case, his taking of the subway train Pelham 123.

Whereas PELHAM 1974 was a psychological battle played out over the radio between the thief and the policeman, PELHAM 2009 has upped the psychological stakes, making Denzel’s Garber merely a dispatcher, but with a dubious background, which Ryder exploits to humiliate him publicly.

James Gandolfini (forever Tony Soprano) is the New York Mayor. Michael Rispoli (Jackie Aprile in THE SOPRANOS Season One) is Denzel’s boss. Watch for Frank Wood (forever Greg from FLIGHT OF THE CONCHORDS) in a serious role as Gando’s advisor. John Turturro studiously underplays his hostage negotiator character and ends up adding another element to this remake – he obtusely accuses Garber of being in cahoots with Ryder, for the coincidence of being the dispatcher Ryder negotiates with.

I’ve made the point many times that in all big budget American movies, when a car crashes it has to flip over. (Makes perfect sense when you see the way Americans drive.) Here, they give us a bonus: when the ransom car races through New York’s idiot streets, not only does it flip over from a simple head-on collision, it tumbles off an overpass and lands upside down. Too bad it didn’t explode – or we would have had the trifecta!

Besides the opening scenes (in which director Scott seems to be trying for some kind of skateboard-punk urgency, with his ramped film, strobed shots and crash-cuts), in all respects, the filmmakers have taken this PELHAM remake off the rails and done it justice.