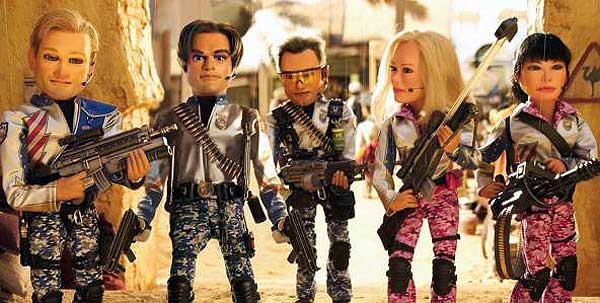 Who pulls the strings?

Be afraid. Be very afraid. Of the heroes.

TEAM AMERICA WORLD POLICE: saving the world from terrorism… whether we like it or not. It’s like THUNDERBIRDS for assholes.

Once again the SOUTH PARK instigators (Trey Parker and Matt Stone) steer into the curve with a raunchy, revolutionary, incitant comedy gem. With R-Rated puppets!

Gary is pulled from his Broadway musical, LEASE, (their opening song, “AIDS AIDS AIDS, Everyone has AIDS…”) and reluctantly takes the reins of responsibilities as a superspy, his decision helped by falling for his co-superspy, Lisa (Kristen Miller). Then he must deal with the Film Actors Guild (F.A.G., headed by Alec Baldwin, “the greatest actor on Earth”), a computer named I.N.T.E.L.L.I.G.E.N.C.E., WMDs and Kim Jong Il.

The brilliant and underrated Parker and Stone (with co-writer Pam Brady) once again push at the boundaries of political correctness, good taste and censorship, as they walk a tightrope parodying terrorism, Amerikan jingoism, their own industry and the stars that populate it.

In the first explosive, action-packed scene, Team America destroys the Eiffel Tower and Louvre while trying to corner a terrorist carrying a suitcase WMD. Dubya would be proud – if he could understand the biting sarcasm. Written on the side of a helicopter that lands on a street vendor’s stall and crushes it, “We Protect We Serve We Care.” 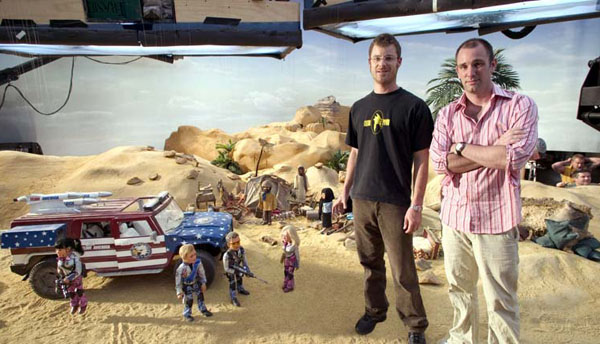 Piling cliché on cliché (from the “Noooo!” scene when a lover dies in a woman’s arms, to The Montage – “Even ROCKY had a Montage”), TEAM AMERICA is an action-musical-political-comedy that spans the globe and gives the middle finger to everyone, not just jingoist Amerikans and Jerry Bruckheimer and Michael Bay. From destroying pyramids, to chunderous puppet vomiting, to Kim Jong Il’s touching ballad, “I”m So Ronery” (i.e. “I’m So Lonely” with a Korean accent), to overzealous full frontal puppet hardcore sex and the rousing “dicks, pussies and assholes” speech, TEAM AMERICA is one shocking gut-laugh after another.

And where else would Team America’s secret headquarters be, but in a hollow Mount Rushmore, with the presidents’ faces as secret entrances?

By the time kids discover this movie is too nuanced for them to understand and appreciate fully, they’ve grown into the adults that will change the world, and will hopefully have been influenced by the electric revolutionary ideas of the modern day radical activists, Trey Parker and Matt Stone.

Either that, or they actually join Team America in destroying the world, i.e. the Amerikan Military or the Republican Party.