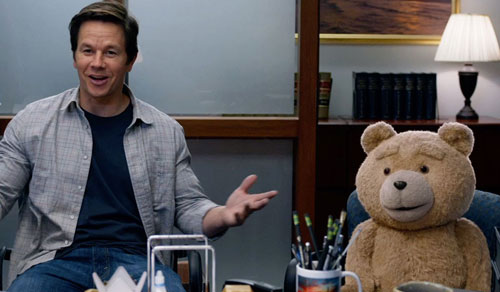 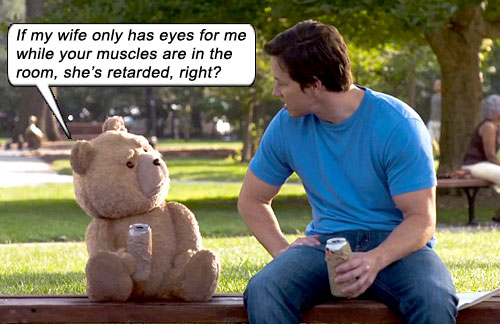 Seth MacFarlane makes the sequel to his R-rated TED (2012) even more R-rated. My biggest fear with this followup to the highest-grossing R-rated comedy ever was that the studio would castrate raconteur MacFarlane; that someone would wear him down with money and political favors and handjobs, but thankfully, writer-director MacFarlane and his co-writers Alec Sulkin and Wellesley Wild were allowed to steer into the curve. Rainman definitely into the curve…

Teddy bear Ted (voiced and motion-captured by MacFarlane) and his new bride Tami-Lynn (Jessica Barth, the Perfect Woman: curvy, blonde, foul-mouthed and white trashed) decide to have a baby for the best of reasons – to stop arguing in their jaded marriage. With the help of his human pal John (Mark Wahlberg, as sassy as ever), Ted tries to find a sperm donor, but then a greater obstacle arises. To qualify as a parent, Ted must prove he is a “person” in a court of law. Enter love interest lawyer Samantha (Amanda Seyfried) – who loses the case! When he is declared nothing but “property” Ted is targeted by the perverse Donny (Giovanni Ribisi), who wants to take him apart to discover his life essence and mass-market it.

TED 2 is awash in guffawing humor. Even with pacing and tonal problems in its courtroom scenes, hold it up to any so-called American comedy and it will wipe the floor with it like a dirty jizz-rag (sorry, just caught up in the Ted ethos). A riotous mix of lewd humor (“There are no chicks with dicks – only guys with tits!”), smartass punches (“You’re covered in rejected black men’s semen. You look like a Kardashian!”), and internet searches that bring up black cocks. Always black cocks.

Setting a blistering pace with the raunchy gags, and creating an easy chemistry between Ted and John (who is relegated to an almost supporting role here), MacFarlane then stretches his welcome by tackling social issues. While Ted is trying to prove his personhood in court, the cheeky tone is lost, even though Ted is given lines to try to keep it light: “I’m standin’ up for me, and I’m standin’ up for the homos!” But why is Ted’s case being analogized to civil rights and being litigated seriously? This courtroom scene is merely a “beat” that the movie must hit that will set up the comedic situations to follow; that beat being: Ted Is Found to Be NOT A Person – but it is laboriously arrived at, with “soaring courtroom speeches” on the “gift of human rights” and even some Mark Santorum straw man arguments, like “Does your dog deserve human rights? Your toaster?” MacFarlane tries (unsuccessfully) to analogize Ted’s predicament to slavery and gay rights. Uh, no. We find ourselves unwillingly and unnecessarily entrenched in a “courtroom drama” as if this was the point of TED 2! I’d rather be back in Tom Brady’s bedroom with Ted and John, trying to steal sperm from Tom Brady’s golden cock.

Once TED 2 wraps its courtroom scenes, it extricates itself from quicksand and moves back to its welcome filthy banality. 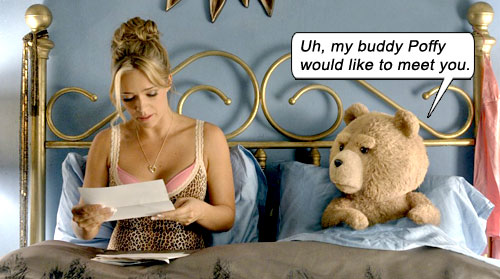 Patrick Stewart narrates again, Sam Jones is Flash Gordon again, Patrick Warburton is a big gay galoot again, Giovanni Ribisi is sinister again… the only person not again is Mila Kunis (who couldn’t participate because – coincidentally – she was having a baby!); written out unceremoniously as John’s divorced ex-wife.

MacFarlane uses the bond he forged with Liam Neeson on A MILLION WAYS TO DIE IN THE WEST (2014) to pull a favor on a droll Neeson cameo. John Carroll Lynch is a CEO of a toy company trying to steal Ted (there’s a giant TRANSFORMER model in his office – a wink to Wahlberg?), and Michael Dorn worfs all over Warburton as his gay lover.

Morgan Freeman is a power lawyer who argues that Ted IS a person because he has “an ability to understand complex emotion and a capacity for empathy…” Either that, or he’s a chimpanzee. There’s even an orchestra swell! Again, the legal scenes detract from the love story subplot of John and “Gollum-eyed” Samantha, or the silly gags referencing THE BREAKFAST CLUB, JURASSIC PARK or CONTACT.

Wahlberg lets loose a comedic side we’ve never seen before, even in the original TED. We’ve seen him grow from the blank-faced punk in FEAR (1996) to a true comedy force in DATE NIGHT (2010) and THE OTHER GUYS (2010), where he stole the thunder from professional comedians Steve Carell and Will Ferrell). Now he’s just bodyswerving into it, working that usually blunt “pushing-his-words-out” style to his advantage. (Before this feature, they ran the trailer to DADDY’S HOME (2015), re-teaming Wahlberg with Ferrell in another ridiculous comedy where Wahlberg is effortlessly stealing Ferrell’s scenes.)

Reminding us of Stewie (from FAMILY GUY, another of MacFarlane’s creations), Ted trips the light fantastic with a troupe of 100 real life tightly choreographed dancers, in an incredibly detailed, old-school dance sequence (a la Gene Kelly). The complaints over this sequence being overlong or boring are irrelevant; firstly, it serves as background to the opening titles; it’s funny and cute and technically amazing and give these artistic things their due, you impatient, pointless e-generation!

I’m still at a loss, though, how Tami-Lynn can “love” this bear with a woman’s urgent love. Even if she loves him in a toy-ish way, she’s actually expressing her love in a groin-ish way – kissing him on the lips and alluding to sexual congress. But what do they do after kissing on the mouth? Is he inserting his arm to gratify those adult human urges?