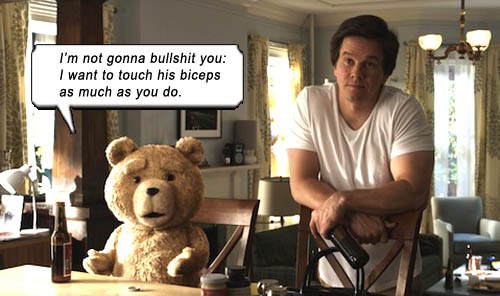 If you go down to the woods today, You’re sure of a big surprise…

WHAT A CUTIE! I want to hug him and kiss him and pet him and sleep with him in my arms. And the teddy bear’s pretty cute too…

TED (voiced by Seth MacFarlane) is a teddy bear who is raunchy and foul-mouthed, filthy-minded and immoral, a lecher, a pot-smoker, a hedonist and a sex addict. And Mark Wahlberg is pretty cool too. When John Bennett (Wahlberg) was a little boy, he wished his teddy to life and it came true, because – so narrates saucy Patrick Stewart – “there’s nothing more powerful than a young boy’s wish… except an Apache helicopter…”

Now Ted and John share an apartment, and a love of pot, a hatred of thunder, and a man-crush on Sam Jones from FLASH GORDON. The fame that would accompany a real talking teddy bear is quickly addressed, and explains how the populace takes Ted for granted now  (“No matter how big a splash you make in this world,” narrates the game Stewart, over shots of Ted doing the talk-show circuit, “eventually nobody gives a shit.”). And through all Ted’s dalliances with hookers and celebs, 35-year-old John has somehow retained a relationship over the past four years with Lori (Mila Kunis).

Written and directed by Seth MacFarlane (FAMILY GUY, AMERICAN DAD), TED is one of those relentless comedies that latches onto your jugular and refuses to be shaken off. Ted’s mouth runs like an exploding sewer, and his cuteness makes up for any non-pc banter that might offend the lesser-hearted; Patrick Warburton as a closeted workmate; running gags on Tom Skerritt; Ryan Reynolds cameos as a gay boyfriend (“that Van Wilder-lookin’ guy”); Jessica Barth as Ted’s trailer-trash squeeze (as Tarantino might be inclined to ask directors who hire hot chicks, “Did MacFarlane TAP that?); Joel McHale (THE SOUP) playing his sardonic SOUP card; fart jokes, dick jokes, scat jokes, smoking, drinking, drugging, prostitution. Bring the kids.

On their fourth dating anniversary, Lori is expecting a proposal from John, which (in her eyes at least) would indicate he is accepting responsibility as a man, rather than remaining (in her eyes at least) in a state of arrested development due to Ted’s ubiquitous presence and bad influence. To allow John to move on with his life, an ultimatum to Ted: get a job (which would definitely cut into his weed-smoking and hooker time).

“You think you got what it takes?” asks the grocery store manager (Bill Smitrovich) in Ted’s job interview. Ted replies, “I’ll tell you what I got: your wife’s pussy on my breath” – and gets promoted.

Meanwhile, an eccentric Ted fanatic (ominously funny Giovanni Ribisi) is stalking Ted to steal him for his own spoiled son.

Wahlberg’s man-pecs might be self-admittedly delicious, but his acting style still makes us think he’s pushing his voice forward against the wishes of his diaphragm. Funnily enough, in TED, it works! I like the guy as a person – he seems very sincere and a loving family man and great businessman – but no one’s going to accuse him of Thespianism any day soon. Sometimes that One Demeanor/Pushing Air vapidity works uproariously (THE OTHER GUYS, THE DEPARTED), and sometimes it just looks out of place (PLANET OF THE APES 2001) or fails miserably (THE HAPPENING). But he gets to dust off his “Bahston” accent here once again (while Ted sounds suspiciously like Peter Griffin from FAMILY GUY. He denies it though).

Then John and Ted meet Sam Jones (aka Flash!) and we realize how good an actor Mark Wahlberg really is! Bonus – upon meeting Flash, Queen songs start littering the soundtrack. (Queen composed the score for FLASH GORDON.)

Seth MacFarlane’s excellent directorial skills go unnoticed in TED due to the subject matter and content. Keep in mind, this is MacFarlane’s first feature film, and the finished product is so polished and powerful, it seems like he’s been doing this for years. Not only that, he’s writing, voice-acting, and working with CGI (Ted will hate me for telling you this, and will deny it profusely, but he is 100% CGI). MacFarlane keeps the tone upbeat through all the filthy action, and even when it gets dark, his writing keeps comedic tidbits and cultural refs flying at us from every direction – left field, right field, like a bolt from the sky and like a kick to the balls. Bring the kids.

• When Ted is on the phone, he holds it to the side of his head – but his ears are up the TOP of his head!

• When Lori makes a wish, she looks to the stars, in the direction of Ursa Major – the Great Bear. (At least, I think that’s what the filmmakers intended, but the Big Dipper is backwards.)

• At the party, Ted does Bishop’s knife-between-the-fingers gag from ALIENS, and later, when pulled apart, he laments, “I look just like that robot from ALIEN” (meaning Bishop).